One of my favorite parts of a new year is getting to play the video games my brother gave me for Christmas. This year, that means finally diving into Tomb Raider's latest incarnation, Rise of the Tomb Raider. 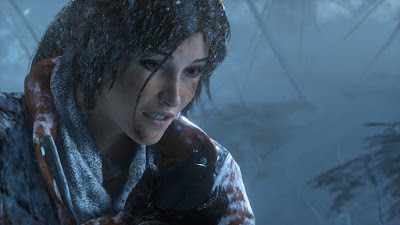 I wasn't a huge fan of the original Eidos version of the game. I think I played some early demos way back in the 90s, but they made me sad because I had to shoot wolves. I was curious about the modern reboot, though also a little apprehensive: gameplay clips made me worry it was trying too hard for the "dark and gritty" label that has plagued modern superhero movies and other franchises. The sequel, though, has gotten uniformly good reviews, and I've wanted to check it out for a while. 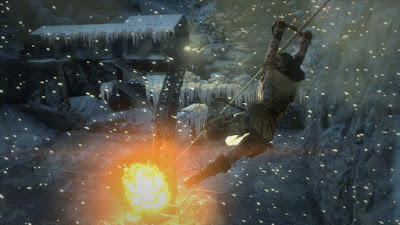 So far, it's been awesome! Especially after the minor humiliation of Mirror's Edge, it's felt great to cruise through these levels, solving puzzles and stealing priceless artifacts and setting villains on fire. According to the in-game progress meter, I'm a little over one-third of the way through, so I figured this would be a good place to stop and record my initial impressions. This post will focus on the gameplay; I'll almost certainly do a wrap-up later that covers the story and characters. 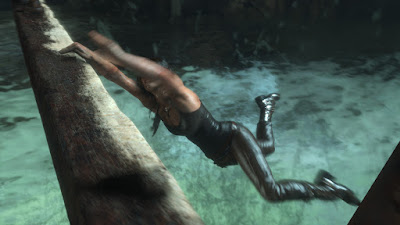 At a high level, this game feels like a mix of Shadow of Mordor with The Last of Us. (Note: I'm probably exposing my ignorance of other franchises that would be closer matches, but those are the closest of the games I've played.) Like Shadow of Mordor, Rise of the Tomb Raider has an XP system that unlocks purchasable skills, relics that can be rotated in 3D to find hidden secrets, and a similar level design built around large zones. Fortunately, the plot (so far) is infinitely better then SoM's vile story. Combat mechanics are most similar to The Last of Us, with a similar assortment of weapons (bows, hand melee weapons, and firearms), as well as craftable weapons that can be made out of resources found in the environment (molotov cocktails, explosive cans), along with homemade bandages and other crafting. 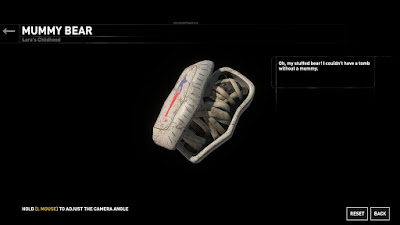 Like both SoM and TLoU, the game supports a variety of game styles, from run-and-gun to sniper to grenadier to assassin. I've been varying my behavior more frequently in this game than either of those; if memory serves, I almost exclusively used melee stealth kills in both of those. In RotTR, I prefer to use my bow for stealth headshots from a distance; but if I'm getting swarmed by wolves I'll pull out a rifle, and if I'm getting crowded by armored soldiers I'll start building bombs. In the skill tree, I've primarily focused by skills that help me navigate the environment, followed by stealth abilities, followed by crafting, followed by archery. Similarly, my main priority for crafting is expanding my resource capacity, followed by bow upgrades, then upgrades for my firearms.

Gameplay is nicely balanced between exploration, hunting, fighting, and puzzles. I'm playing on the standard difficulty level ("Tomb Raider") and am finding it just right: I've died a couple of times, but thanks to the generous checkpoint system it's never felt too punishing. The puzzles deserve special mention for being cleverly designed, challenging but still logical. Most of the time I'm eventually able to figure them out by looking around and figuring out how things are connected. Once or twice I've had to resort to Google; in those cases, though, once I've figured out how I'm supposed to solve them, it's just a matter of following the necessary steps. It's felt like a breath of fresh air after Mirror's Edge, where twitch reflexes were required in addition to understanding what actions to take. 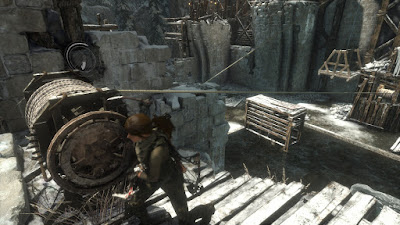 The game looks amazing. The graphical high point for me is probably Lara's hair: it's hands-down the best hair I've seen in any video game ever. (Apparently, they went so far as to write a library specifically to render her hair, which calculates the physics for each of thousands of strands of hair. Dang!) It moves, and flows, and cascades; when Lara climbs out of a pool, she wrings the water from her mane. It's so good. I want hair this good in every other game I play. My new dream is for the next Dragon Age game to have hair this detailed. 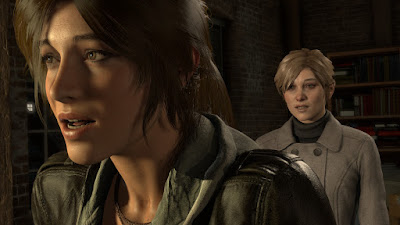 And the outfits! I have a well-documented weakness for playing dress-up in RPGs, and it's fun to get to indulge that in an RPG as well. The game starts with more than a dozen choices, with a few more unlocked over the course of play. They look great, and are also a nice change of pace from the hot-pants-and-tank-top look of the classic games. Since RotTR is set in, y'know, Siberia, her clothing is much more sensible. There's a great variety of fashions available, incorporating furs or high-tech fabrics or oodles of layers or native dress. (In a nice touch, if you wear a henley or other lighter-weight garment, Lara visibly freezes with chattering teeth when in icy areas. It's a great little piece of feedback that gently encourages you to please treat your virtual video game character a little better.) One very mild complaint: a few outfits come with in-game benefits, leading to a disappointing tension between choosing the best look or the best mechanics. The bonuses are relatively minor, though, which frees me to usually grab whatever catches my eye during a given time. 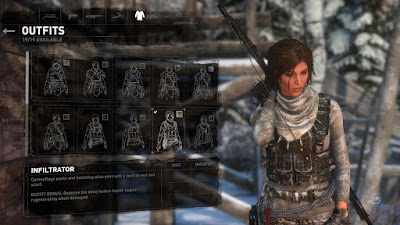 Character designs in general are great as well. Lara Croft used to be a punchline when it came to video game characters; she's definitely idealized here, but feels grounded in a way that her previous incarnation never did. All of the other NPCs are nicely differentiated, with a variety of body types and skin tones and tattoos and facial hair and so on. And the movement is just fantastic, much like in an action movie, with really dramatic reactions and poses. 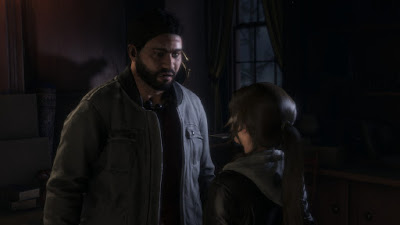 And, let's not forget the environments! I'm sure there's more still to come, but already, I've been blown away by how gorgeous these areas look. In real life I'm particularly drawn to mountain ridges, and this is one of those games that can kindle a similar love in me when I scan their virtual vistas. But I'm also impressed by what they're able to do with rust and decay. Much of the game so far has been set in an old, abandoned Soviet installation, badly weather-beaten and somehow all the more beautiful for it. 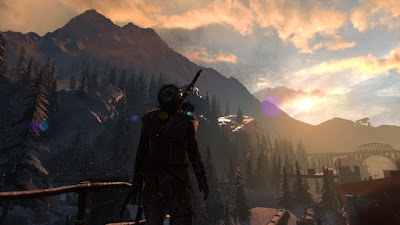 On the negative side... hm, I don't have much to complain about. Sometimes, while I'm moving to the side along a ledge and press Space to move myself up, the sideways momentum continues and I end up leaping off. That's a bit annoying, but I've learned to come to a complete stop. Waypoints aren't very useful, especially when they're marking a location deep underground instead of pointing you towards the entrance. A lot of the relics and logs are pretty boring; I feel like we're reaching the end of the useful life of in-game audio logs. It's been more than twenty years since System Shock introduced them, and they've served their purpose, and I feel like it's time for something new. 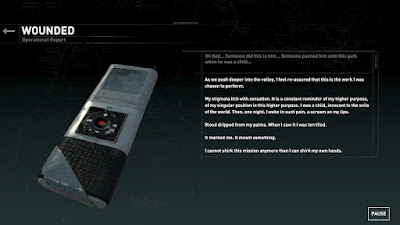 Also, while Lara does have a really nice voice (I'm a sucker for a British accent), she sounds so bored when she's examining a relic or contemplating a puzzle or otherwise commenting on her environment. I kind of suspect that that's intentional; at least, I've noticed the same tendency for male leads in other AAA action games, who seem too world-weary and detached to really care. And I dunno, maybe it would get grating if Lara regularly sounded excited and curious about the world around her. But, outside of the cutscenes, I never feel like she's having nearly as much fun as I am. 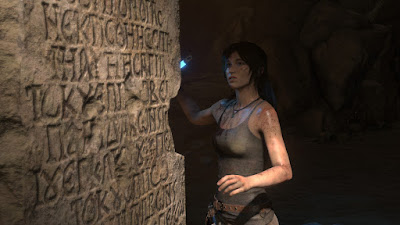 I should mention that I'm playing the "20 Year Celebration" edition, which comes with all of the DLC, most notably "Baba Yaga: The Temple of the Witch". At the start of that mission, I met a new character named Nadia, and almost immediately started wishing that she was voicing Lara instead. Again, not that I dislike Lara's voice per se, but Nadia just seemed so much more engaged in what was going on around her and had a certain sense of humor. 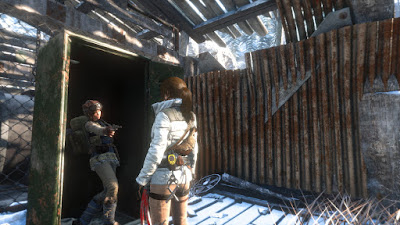 It wasn't until maybe an hour later that I went "Wait a minute... don't I know that voice from something else? Is that Ashly Burch??" After finishing the mission I went online to check and found that, yep, it was! So that was a really fun and unexpected coincidence: I've been mainlining Hey Ash Whatcha Playin? for the last week, and have had Feelings About Chloe Price for months before that. I now kind of want every video game in the future to feature Jennifer Hale and/or Ashly Burch. We can make this happen! 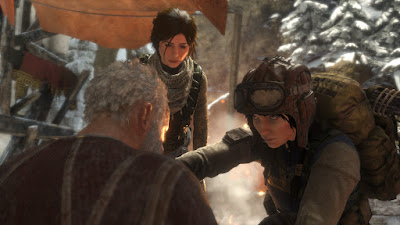 So, yeah. More later, but in the meantime, I went ahead and annotated my albums so far. That's right, albums! I actually divided my screenshots into multiple groupings so I didn't have hundreds of images all jumbled together in a single unnavigable mass, what an innovative idea. I really should make a habit of this for my longer-running games. Anyways, here they are. Spoilers for each segment within.
Intro
Soviet Installation (first major zone of the game, maybe about 1/3 of the content?)
Blood Ties (standalone DLC)
Baba Yaga: The Temple of the Witch (DLC)
Posted by Christopher Charles Horatio Xavier King III, Esq. at 8:19 PM