Murder in the Last

As previously noted, I've been playing through games that are increasingly-tangentially related to Life Is Strange, my favorite game of last year. One of the last items on that list is "Murdered: Soul Suspect." This is a very unusual and intriguing game: it's a mystery-adventure game, with quite a few mechanics that I've never seen done before. More relevantly to my interests, it also features the debut voice-acting appearance of Hannah Telle, who played Max Caulfield in Life Is Strange and a supporting character in this game. 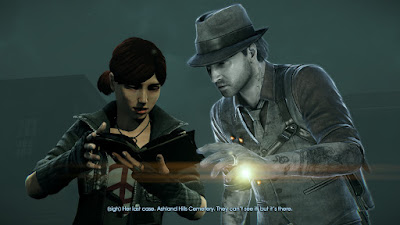 M:SS is one of the most noir-y video games I've played. I found myself oddly reminded of Discworld Noir, another mystery-adventure hybrid; the earlier game was heavier on the adventure side, and more focused on comedy, but both combine supernatural elements with noir conventions in a surprisingly effective stew.

Between the two, I think M:SS does a better job at actually playing like a mystery game, rather than using the mystery as flavor for a different type of game. The other recent example I thought of was Telltale Games' The Wolf Among Us, which has a super-noir-y storyline, but the same interface that Telltale uses for horror games, focused on dialog (interrogation) and exploration (investigation).

In contrast, M:SS not only has you searching for clues, but also drawing inferences and deducing outcomes. The clues you assemble form a constellation of possibilities, and after acquiring as much knowledge as you can, you'll then need to filter them down and find what's actually significant. 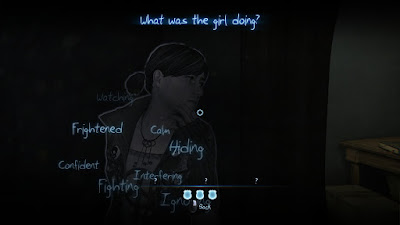 This felt really fresh, although it often made me think that the protagonist Ronan was a bit thick. You, the player, will often figure out what's happening early on, and will see multiple flashbacks describing what has happened, and only after it's crystal clear will Ronan finally go, "Oh, now I understand!" and re-play everything again, just to make it as obvious as possible. Conversely, you'll occasionally encounter a puzzle that's just obtuse and requires guesswork to solve.

For better or worse, M:SS isn't a hard game. There really isn't any penalty for failure: you can just keep guessing and trying until you come to the right solution. In an ordinary game, this would bother me, but this isn't an ordinary game. The story and mechanics are so different from what we're used to, and I really appreciate the novelty; best of all, the gameplay is nicely aligned with the plot. It doesn't feel artificially easy, it feels like it's easy because of the capabilities Ronan has.

The big hook, which reveals itself near the start of the game, is that Ronan is dead, the titular "Murdered" of the title. You're a ghost, with all the abilities that entails. You can walk through walls! Teleport to distant locations! Read the minds of people around you! Make televisions turn all staticky! 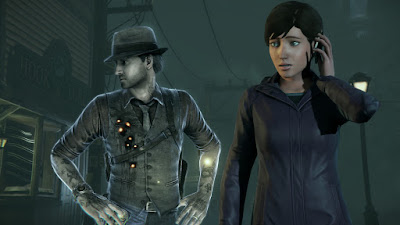 The one threat you face is demons, who are creepy and can "kill" you. I mean, you're already dead, but they can suck out your soul and devour you, so, uh, keep your distance. This is yet another aspect where this game feels unique, since the "combat" against demons is unlike anything I've encountered in other games. You "possess" "ghost residue" to camouflage your location, activate spectral ravens to distract them, sneak up in their blind spots and destroy them with a semi-unique three-keypress combination. I can't say it's a particularly challenging or deep form of combat; but, again, the fact that it's unlike anything else I've played makes me inclined to enjoy it. And, again, it really isn't hard. Despite the unfamiliarity, you can pick it up quickly and get through those challenges with minimal fuss. 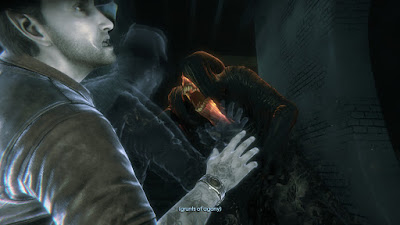 Other than those demons and the bubbling pits of torment from whence they come, though, there really aren't any obstacles in the game. It was really fun to re-program my brain and get used to doing all the things you can't ordinarily do in video games. At the top of that list is walking through walls. This feels profoundly liberating the first few times you do it. However, I was noticing that I would get a bit disoriented and nauseous (in real life) after spending time in-game recklessly pouring through apartments. I eventually conquered that by restricting myself to only going through (closed) doors: I knew I had the freedom to pass through any wall, but my mind apparently had trouble coping with those transitions.

Let's talk characters! I kind of groaned during the opening flashback where we learn about Ronan's dead wife Julia; I am massively over with video games about middle-aged male protagonists who are Dark and Gritty and Tormented because of their dead wives. That said, over the course of the story I found myself softening on it quite a bit. I actually like that Julia's death was so random and pointless; Ronan isn't driven by revenge, just by sadness. And Julia gains some depth too, not being some pure angel who saved the troubled Ronan, but having issues of her own that Ronan had helped her through. 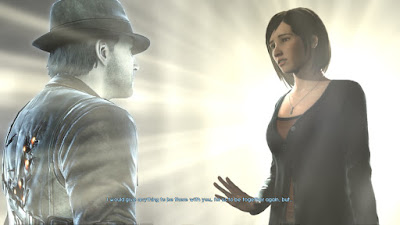 The most important character, though, even more than Ronan, is Joy. I really liked her portrayal in this game, fierce and independent and talented without seeming annoying. I've been struck lately by how much better video games seem to be at depicting child allies than movies are: in examples like Elle in The Last of Us and Joy in this one, they seem brave and helpful and immensely likeable; in contrast, children like Anakin in The Phantom Menace and John Connor in Terminator 2 drive me absolutely nuts. Anyways, I really appreciated Joy's arc: she doesn't immediately buddy up with Ronan, and seems to have a lot more agency than sidekicks typically do, but that never felt frustrating, just a believable element of her character. 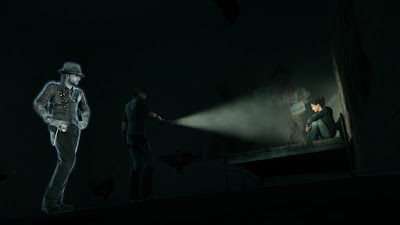 Hannah's characters show up closer to the end of the game. She actually voices twins, Iris and Rose Campbell. Her performance is great, quite possibly the most challenging of the game: she has to sound simultaneously insane and sympathetic as Iris, and as an eternally-burning-and-vengeful ghost as Rose. The flashback scene where she's murdered has the most heartbreaking, agonizing voice acting in the game. I was a little surprised that we didn't get to see more of those characters since they were so compelling; Rose in particular didn't get to do a whole lot. Still, I was really grateful for the scenes they do get in the game.

Those performances might have been the reason I picked up the game in the first place, but fortunately they weren't the only good thing about it! In addition to the great acting and unique gameplay, M:SS does a fantastic job at depicting a slightly sinister yet immensely likeable vision of Salem, Massachusetts. There's an immense amount of detail in the environment, immersing you in the modern setting that feels like it could be happening right now. 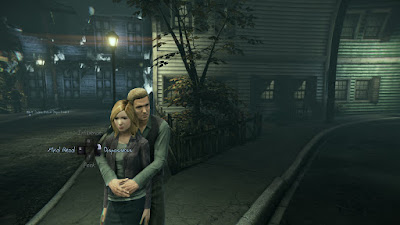 The stuff you can interact with is great, but I almost prefer all the things you can't affect. After a while, you realize that the vast majority of the people in the world have nothing to do with your story. And yet, they're all there, each existing, with their own concerns and lives. You can eavesdrop on them, hear what funny or tragic things are occurring to them: they don't affect your own problems, but reinforce the idea that this is a big, complex world, and you're just seeing a small part of it.

That's even more strongly reinforced by one of the most disconcerting visual elements of the game: ghostly figures, often standing stiffly with a 19th-century pose, staring at you from the middle-distance. As you approach, they shudder and fade, vanishing from sight. You'll never get to know them or their stories. There are so many of them! You gradually come to feel that Salem is filled with ghosts, with uneasy departed spirits. You hope to solve one mystery by the end of the game, but countless others are waiting, staring, filling up the world. 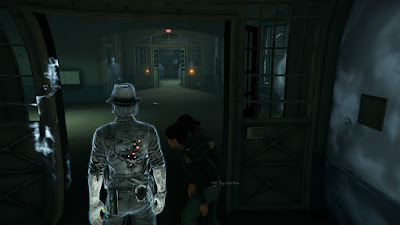 Sadly, those mysteries will almost certainly never get answered. Airtight Games, who developed this game, went out of business just a few weeks after it was released. Which is a shame... they were doing some really unusual, innovative stuff in this title, and I wish we lived in a world where such innovation was rewarded rather than punished. Still, they left behind a lovely little artifact in this game, and I've greatly enjoyed my time exploring it.

Hey, here are some albums! Spoilers within each section, although I try to avoid referencing future events.
Part 1
Part 2
Part 3
Part 4
Part 5

BOO! (That, uh, was an interjection, not a review.)
Posted by Christopher Charles Horatio Xavier King III, Esq. at 10:16 AM