This is the first of two non-video-game-related posts. But the new Mass Effect comes out next week, so expect a return to form shortly!

I was fortunate enough to catch a preview performance of Hamilton’s national tour, shortly before the official opening in San Francisco. I’ve been fairly obsessed with this show since the cast recording was first released, listening to it a frankly ridiculous number of times. This was my first time actually seeing a staged production, although I’ve devoured tons of info from the original broadway cast including all promotional clips, award show appearances, #Ham4Ham shows, talk show appearances, etc.

While this was officially a preview, it seems to be running really well already. (Which makes sense - I know this cast has been rehearsing for quite a while.) I think there was one point where Burr’s microphone was just a fraction of a second slow in getting turned on. Stuff like that just reinforces to me how crazily tight and intricate this show is - it’s incredibly dense, and while it doesn’t call attention to its technical underpinnings, it’s a huge feat to just keep everything in sync: the sound, choreography, cues, chairs, lights.

Bottom line up front: I loved the show! I couldn’t help comparing it to the OBC, and much of the below post will be my reflections on this. It’s definitely a different beast: the actual lyrics and (from what I can tell) set and staging are identical, but each of the principal characters are owning and remaking their roles anew, which can significantly shift not only the feel but the underlying message of the show.

The most obvious change is definitely the title role. Michael Luwoye is a totally different take on Hamilton from either Miranda or Muñoz. He is INTENSE, raw ambition: he displays a strong hunger to be recognized, to leave a mark on the world. Miranda is a bit like a puppy dog, awed at what he discovers and eager to make friends. Muñoz is the “sexy Hamilton,” charming and gliding his way upward. Luwoye is focused, driven.

One side-effect of this is that the romantic relationships seem paler. I didn’t sense a whole lot of chemistry between him and the various women he encounters. The strongest tie is with Angelica, and you get the sense that that’s driven very much by her wit and prospects, not so much her (substantial) beauty. The encounter with Maria Reynolds is still powerful, but he seems stunned by what’s happening rather than lost or drawn astray. And the Laurens tie seems to have been dropped altogether (which, to be fair, isn’t really present in the script and relies on direction and actors anyways).

On the other hand, I much more strongly felt Hamilton’s tie to Philip here. There’s genuine fondness, and I also think it makes sense if you think of this Hamilton as being primarily obsessed with his legacy: Philip literally is that legacy, the part of him that will continue into the future. Likewise, Hamilton’s tie with Washington felt particularly important here.

Isaiah Johnson as Washington was INCREDIBLE. I enjoyed his first entrance during “Right Hand Man” (which might be my personal favorite song of the show). My initial reaction was, “Huh, he sure has a different voice from Chris Jackson. He’s more raw and powerful, not as polished and smooth as Jackson. It’s still a great voice, just doing something different.” And then, once “History Has Its Eyes On You” started and buttery notes began emerging from his throat, I realized: “Oh! He can sing any way he wants to!” It was really fantastic, and one of the parts that elevated this above the OBC for me - don’t get me wrong, I love Chris, but this was such a cool dramatic tool and journey. When we first meet Washington, he’s desperately trying to keep the country alive and bound together with his pure strength of will and presence, so of course he has a rougher and more commanding voice. Later, as he transitions from soldier to president, he exchanges his military skills for political skills, growing smoother and sweeter. It gets better and better throughout the show, reaching an apotheosis in a jaw-dropping performance of “One Last Time”. I found myself desperately wishing that there was more Washington in the show - for as important as he is in the story, he isn’t actually on stage all that much, and I loved his charisma and voice whenever he appeared.

Another principal who may have elevated the original was Emmy Raver-Lampman. She was an ensemble member in the original cast, and is now the touring Angelica. Keep in mind that Renee was probably my favorite member of the OBC (along with Daveed), so it means a lot when I say that Emmy might be even better than her. Satisfied was… transcendent. I got chills. She nailed her own, new notes, ending in a crescendo that left the whole audience amazed.

One fun part of actually SEEING the musical is coming to realize just how involved everyone is throughout the show. Cast members who do not sing are still present in many scenes: the Schuyler Sisters observe Hamilton and his crew as they gallivant about New York City, and Washington has his eye on Hamilton as he starts agitating against the British. Angelica continues to observe events from across the ocean, and even King George takes note of the Election of 1800.

The one role that felt like a step down from the OBC was Lafayette/Jefferson. There's nothing wrong with the new guy - he's probably a better technical singer than Daveed, and was able to pull off all the raps, including the crazy bars in "Guns and Ships" and "Washington On Your Side." I think Daveed is just a remarkably original charisma, and it'll be really hard to find anyone who compares to that.

I should probably stop comparing everyone one-by-one... in general, I thought everyone was fantastic, trying to do something different and creating something good. Rubén Carbajal was shockingly sweet and believable as little boy Philip. Joshua Henry as Burr and Solea Pfeiffer as Eliza both seemed more introverted than their originators: they both come across as reserved and somewhat unknowable early on, which makes their eventual emotional outbursts all the more striking. Amber Iman was a GREAT Peggy, and also a terrific new Maria; this interpretation is much more clearly a woman in trouble who needs help, not a seductress (which, again, is a much more powerful figure for this version of Hamilton, so much more concerned about his impact on the world than his personal happiness). Mathenee Treco was FANTASTIC, another member who I thought might have elevated the original: his Mulligan is still really funny, but also a lot more slick and charming; his Madison seems more of an equal with Jefferson (albeit still sickly) instead of being a toady. Oh, and I thought Rory was fantastic as King George III - I'd heard some mixed things after he joined the Broadway cast, but he OWNED this role, reliably cracking up the audience and pulling off really funny moves in each appearance.

So: One major aspect of this production, as I keep noting, is how each of the principals were clearly doing their own thing and not just imitating the OBC. This includes their physical appearance: not just body shape and complexion, but also hairstyles; the iconic ponytails from Broadway are nowhere to be found. Given this, I was slightly surprised to see that, within the ensemble, they seemed to be recreating the looks of specific individuals from the original company. You could see clear doppelgangers for Carleigh Bettiol, Betsy Struxness, Thayne Jasperson, and other OG dancers. Same body shapes, costumes, haircuts, etc. Even Emmy, who is now a principal, had her own mini-Emmy. I'm definitely not complaining, just thought that was interesting.

The audience was terrific: rapt during the show, giving enthusiastic applause at the appropriate times but not, like, singing along or anything uncouth like that. (One other small semi-technical thing: I'm pretty sure that they cut out the record scratch after "Immigrants: We get the job done!", or else maybe people were a bit slow in reacting, but the audience response definitely stepped over the next bar or two of lyrics.)

I hung around the stage door after the show. More than half of the principal cast came out, led by Rory. Everyone was very generous, making a real connection with people, answering questions, and gracefully joining in selfies when asked. I was a little disappointed that Emmy didn't make the rounds, since she was the person I most wanted to meet, but still: I got to spend a few seconds with Hamilton and Washington and Peggy and Eliza and George and Philip and a few folks from the ensemble, hooray! (I think one of them was Jennifer Geller, but can't quite make out the signature - whoever she was, she was a particularly great dancer!) There weren't too many people hanging around for autographs; I'm curious if that's just not as much of a thing in SF as in Broadway. Personally, I haven't ever done it before, but was really glad to have stayed and met the actors... it's a different thing, but I think I've been somewhat prepared by my attendance at author signing events, so I now prepare a nice, short, specific compliment for each person. (I was NOT prepared enough to bring a Sharpie, though - fortunately most actors have their own, and other people in the crowd were happy to share theirs.) 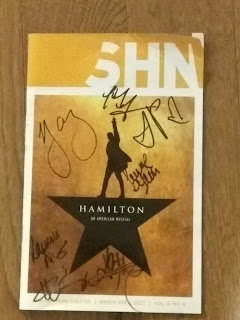 So, yeah! This show is awesome. I'll be seeing it at least once more, and expect to pick up on even more the next time around - I'm still struck by just how dense it is, not only lyrically but in staging. Tickets are, of course, ridiculously expensive, but I've been really encouraged to see that they're continuing the tradition of putting on shows for public-school students and also reserving the best seats in the house for $10 lottery winners. I'll be entering daily!
Posted by Christopher Charles Horatio Xavier King III, Esq. at 8:15 PM