Waaaaay back in March, I picked up The Long Earth in a duty-free airport bookstore. It's been my background reading ever since then: I'll pick it up and read a couple of chapters when I'm able to divert my attention from encroaching armageddon. It's been a good read: fun and interesting, weighty without being particularly dark. 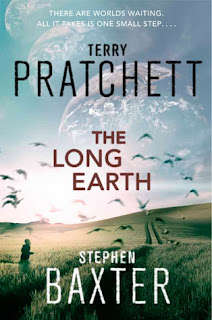 It was written as a collaboration between Terry Pratchett and Stephen Baxter. To be completely honest, I couldn't detect a whole lot of Pratchett in here. It would have been written after his illness had advanced, and I suspect that Baxter performed most of the actual writing duties. In comparison to, say, Good Omens, you don't get much of the Pratchett spark here. When it does shine, though, it is brilliant: one particular pun near the end of the book made me want to howl with rage and delight.

Even if it doesn't feel especially Pratchett-y, though, it's still fun and well-written, taking a really intriguing premise and getting a lot of material out of it.

The "long earth" of the title is the discover of a seemingly infinite number of parallel Earths. The basic concept has been done many times in a variety of media: slightly different events in the past have led to different versions of the world. So some Earths are frozen snowballs, others are exceptionally fertile, many have species of animals that look different from our own. The unique and exciting thing about this story, though, is its democratic orientation. In every other story of this kind I've read, it's just a small group of people who are able (or forced) to move between worlds. Here, practically everyone has the capability. Once "stepping" is discovered, something like 90% of the earth's population can just choose to travel to another world and start another life there.

As with a lot of good science fiction, the authors diligently work through consequences of this scenario. What happens to Earth's economy when anyone can simply leave, pursuing a world of plenty instead of laboring in a menial job? What status do nations have across universes? How do the people left behind on the original Earth ("Datum") feel about their lot and those who have moved on?

I really enjoyed this aspect of the book, and was mildly disappointed that the bulk of the middle ended up focusing on a single voyage. The voyage itself was cool - lots of nifty worlds to explore, unusual species to encounter, exciting incidents of danger and escape - but it felt oddly claustrophobic, mostly focusing on just two people, and largely discarding the rich cast of characters that populated the early chapters of the book. (I particularly keenly felt the loss of Officer Monica Jansson, who was hands-down my favorite character but is MIA for most of the book.)

This is the first book in a series, and it seems fairly obvious that the union of Lobsang and First Person Singular will be a major plot point in future novels. Reading about FPS vividly reminded me of Leviathan in Robert Anton Wilson's Illuminatus! trilogy, which was an idea that fascinated me and I don't think has been explored much elsewhere. There are so many fundamental things about life that we take for granted which seem like they could have very easily gone in different directions, and FPS/Leviathan seems a particularly believable and intriguing example of an alternative design.

So, yeah: I liked this book! It doesn't fully scratch that Pratchett itch, but it was still a good read, and I expect that eventually I'll read the remaining entries in the series.
Posted by Christopher Charles Horatio Xavier King III, Esq. at 7:26 PM