That Would Be Enough

I recently picked up Enough., a little book written nearly a decade ago by John Bogle. I've distantly admired Bogle for some time now. He's most famous as the founder of Vanguard, the investment company that has grown since its inception to dominate the mutual fund industry. He also created the world's first index fund: a type of mutual fund that seeks to simply match the value of a stock market benchmark, such as the S&P 500, rather than attempting to select stocks that will beat that benchmark. My personal investing has always been through Vanguard funds when possible, and in cases where it hasn't been (such as some 401(k) plans I've participated in), I've tried to follow a similar strategy of simple, low-cost funds. 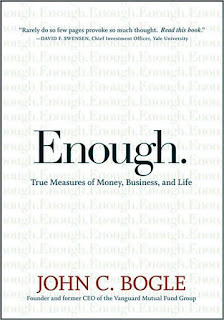 Some people gain fame and praise for their success: amassing impressive fortunes through the businesses they've founded. Bogle is famous for sort of the opposite reason. While the Vanguard Group today manages about $4 trillion, Bogle himself has lived relatively modestly. In contrast to high-flying managers of hedge funds and major publicly traded corporations, who lose billions of their clients' dollars and walk away with eye-popping payouts, Bogle has fully embraced the principle of keeping costs low, even (especially!) when it means keeping extra money in his investors' pockets instead of his own.

Enough. was a more meandering book than I expected, but a really excellent one. It starts off as a sort of abbreviated memoir, talking through his family's struggles during the Great Depression, early financial lessons he learned, a variety of low-status jobs he held. A recurring metaphor he uses is "looking for diamonds": people who are constantly chasing wealth and pleasure never find it, while those who cultivate their circumstances find unexpected success. His main point is that he did not start out seeking to build an investment giant, and he encountered plenty of obstacles and setbacks along the way; but because he worked through those setbacks, he ended up with greater results than he would have otherwise achieved.

What especially struck me about the book, though, was Bogle's fiery denunciation of the finance industry. It was published in 2008 as the great recession was starting, bringing to unavoidable light many of the problems he has railed against for years. Some of these get at the very heart of what finance is, using stark language that's really eye-opening and kind of calls into question the values that underlie our free-market capitalist system.

Finance serves a very important role and is a major component in the success of businesses and nations. However, it does not by itself create anything of value. Ideally, it is just a facilitator, a sort of minimal conduit that collects available money and moves it to where it is needed.

This is the role that finance traditionally played. In the last half-century, to Bogle's immense distress, the order of things has been upended. Finance has become the king rather than the servant. In a sort of perversion of the ideal order, businesses are now changing their actions and strategies in order to appease the artificial numbers demanded by their finance masters, rather than pursuing their core business and simply using finance to reflect their underlying value. Along with this inversion, people working in finance have become the best-paid people on the planet, raking in obscene amounts of money when businesses do well, and paying no price when they do poorly.

One particularly worrisome side-effect of this is that, when the best and the brightest young students are graduating from university and deciding on careers, they are increasingly choosing to chase the most lucrative jobs, which are Wall Street jobs. There's a sort of brain drain in effect: rather than our nation's intellectual capital being put to work on making new discoveries, creating new inventions, they are turning all their mental capacity to an activity that just skims value out of companies and bilks investors, without creating any underlying economic value.

So, yeah! Pretty strong words, especially from such an accomplished and respected figure in the field. I was really struck by how much he sounded like Elizabeth Warren or Bernie Sanders in much of the book, which is not an association I would have expected.

From this broad economic condemnation, he ends the book on a series of reflections related to character in business conduct and as individuals. This is a part that rung particularly strongly to me, as I think about the impact my actions have on the people around me and the longevity of our company. As he points out, these are not at all new ideas: to the contrary, there's a sort of ethical code that's rooted in 18th-century values which historically has produced both virtuous actions and a strong, growing economy. These seem straightforward on their face, but he shares a lot of wisdom in unpacking and explaining them, giving concrete examples of the harm caused when they are not followed. A couple I remember off the top of my mind:

Practicing stewardship. In a business relationship, you have gained the trust of your clients or your customers. It's important that you put their needs before your own and work to ensure their long-term happiness. It can be tempting in the short term to view them as assets to be exploited, but such actions will irrevocably damage your reputation and, incidentally, be much less profitable.

Focusing on the things that count, and not the things that can be counted. People tend to get obsessed with metrics that can be conveniently quantitized and compared: earnings in a quarter, number of customers. But these things are just measures of underlying value, not things of importance in themselves. The most important things are not easily counted: your reputation, how happy your employees are, the quality of the product you provide. Counting is important, but it's wrong to focus on it. Tend to the underlying health of your company and the numbers will follow.

He also makes a surprisingly strong plea for personal character and conduct. He cites his own Christian faith in passing, but focuses more explicitly on the example of people like Benjamin Franklin who were focused on self-improvement. It was cool (but, again, a little surprising coming from a "finance guy") to read such a full-throated endorsement of civic engagement, of giving back to the country that has enabled success, of building ladders that will help others rise. This has been a long tradition in America, but one that has mostly vanished in the self-obsessed "I've got mine" attitude that seemed to ascend in the 80s and has become embedded in the national psyche. He goes back to the original writings of Adam Smith, pointing out the importance of government and civil society, institutions that are increasingly devalued today.

The overall message of "Enough." isn't a surprising one. Don't go chasing after immense wealth. Focus on your circumstances, your character, practice contentment, and you will end up far happier than those who greedily and voraciously pursue ever-increasing money. It's a great message, one given even more weight by the man giving it, who I now respect even more than before.
Posted by Christopher Charles Horatio Xavier King III, Esq. at 8:32 PM