Part six in a weekly(🚀) devlog.

After way too many weeks of text, it's finally time for a pretty picture! 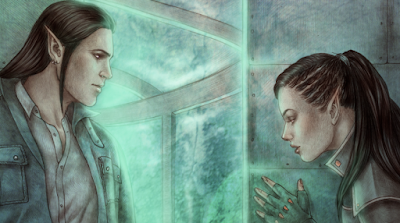 That's snipped from a larger work; you can see the whole thing over at Isbjorg's DeviantArt page.

I love this so much! The colors are so cool, I really dig the luminescent quality of the ambient lighting. The characters look fantastic as well, true to their in-game representations while enhancing them, adding wonderful complementary details. Best of all, it just feels like them, which is pretty amazing since up until now the characters have only lived inside my own head. Desorn's serene calmness and Valiri's eager curiosity shine through in here, perfectly capturing and building upon my conception of these two.

I've admired Isbjorg's work for years, and have commissioned her a few times over the years to draw some of my original characters from video games, as well as a few personal game-related projects. I'm in awe of people who can draw, and she is particularly great: not just her style, but since she has a particular interest in video game RPGs, I think she's especially adept at thinking in terms of characters and scenarios.

I was highly motivated to commission her again for this campaign. Not just because I like her work so much, but since she drew the cover art for my first two mods, I feel like the visual style of my "series" is linked to her art. I wanted to maintain that continuity in this latest entry, both for my own aesthetic pleasure and also so players of my previous installments would be able to quickly identify that this entry comes from the same source.

When I started thinking that I might actually finish this campaign, I began paying closer attention than usual to Isbjorg's status on DeviantArt. She is (understandably!) in higher demand now than in years before. She can go for many months between availability for commissions, and when she does open them up, they tend to fill very quickly.

After a couple of months, I saw a journal update from her hinting that she might be available in the near future. By that point I'd developed a better understanding of these characters and had an idea about the scene to depict, so I did some legwork for the upcoming operation: drafting up the commission and collecting references so I could jump on the opportunity as soon as she lifted the gate.

Isbjorg has a standard format that she prefers using for drawing requests, which I think works really well: it collects a good amount of information without encouraging extraneous details ("My character is very sad that his father was slain by the Dark Lord when he was 17 years old!"), and also helps minimize any potential problems with a language barrier. Since I've commissioned her a few times before, I felt fairly confident in structuring the request.

Here is the note that I sent her:

This will be a half-body picture with two characters and a background. These characters are both teammates of the main player character, and are not romantically involved with each other.

Here is a link to an imgur album with the characters’ in-game avatars and other references. This game has low-resolution character models that aren’t very detailed, and don’t exactly match their portraits, so you can make changes as you like.
imgur.com/a/bKKEk


Please let me know if you have any questions or would like any more information. Thank you in advance!


She hasn't personally played Shadowrun but is very knowledgeable about D&D, so I tend to map concepts into those terms. For example, Desorn is a physical adept archetype, which translates pretty well to a D&D monk.

You can click through the imgur link above to see the references I sent her. I've found that references are invaluable, in any kind of commission. I'm not particularly good at gathering them but I've gotten much better over the years. I've found that I get the best results when I'm specific about a few particular things, but not try to dictate the overall composition of the image. I'll provide a cluster of related images to try and convey the sort of thing I'm thinking about, giving the artist a lot of latitude in selecting among them or creating something new that fits within that conceptual space. Artists are much more creative than me, and have a much better overall aesthetic, so I like to find people I trust and then give them as much leeway as possible. I'm always pleased with the results!

Anyways: she replied with a clarifying question about the pose I had in mind; I identified several pictures in her gallery that showed poses which would work and sent them back to her. The fee for this drawing came to 78 euros, which was a bit under USD$90 with currency conversion. I paid via PayPal and she reserved my slot. Even though I had jumped on the commission very soon after it became available, several other people had already beaten me to it, and Isbjorg closed commissions shortly after accepting mine. So, I was really glad that I moved so quickly on it! They will probably open once more before I finish making this campaign, but maybe not more than once. As it was, there was a wait of almost exactly one month between putting in the order and receiving the finished work. The time can vary a lot, even with the same artist; I think I've gotten some in as little as one week, and others have taken multiple months. Again, good to get this done early.

It's nice to know that this part of the process is complete, and honestly it is also serving as really helpful inspiration: in mood and character, and also as a sort of sunk cost that's motivating me to bring along the rest of the work. It's increasingly likely that I'll finish the campaign in one form or another, and even if I don't, I'll have gotten this really beautiful picture out of it!
Posted by Christopher Charles Horatio Xavier King III, Esq. at 8:50 PM