I picked up My Zero Zero based on a very brief recommendation in one of the Life Is Strange fan communities. I'm glad that I didn't know much about it going in to the book, and the few things I'd heard were sufficient to sell me: that it had some similarities to the game, in particular the core relationship between the two leads. 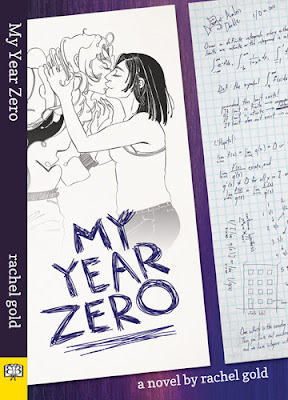 I can definitely see quite a few parallels. For starters, both the game and the book tackle mental illness. Different forms of it (depression in LiS, bipolar disorder in MYZ), and it affects the characters and stories in different ways, but both do a great job of treating it seriously and humanizing the people suffering from the illness.

Some of the characters line up pretty cleanly as well. I didn't get much of a Max/Chloe vibe from Lauren, but I thought that Blake's dad seemed a lot like William. And Cyd really reminded me of Dana. Even if the individual characters didn't have clear parallels, the overall ethos felt very familiar: creative, artsy high-school-age girls navigating stressful relationships and their own futures. No supernatural time-travel here, but they don't really need it.

I did find the game rekindling my own memories of school, even more so than LiS. A small part of this was due to the setting, growing up in Minnesota... there isn't a whole lot of direct regional stuff, but the way characters talked definitely felt like how real (non-stereotypical) Minnesotans talk, down to details like saying "pop" (much of the Midwest says "soda", but Minnesotans are solidly poppers). And the dynamic of school/religious/family life and the odd intersections of it, while not a major part of this book, felt very familiar.

The transition from the outlying areas to the cities felt familiar as well. Duluth isn't a suburb, but also isn't densely urban. My family left Minnesota before I was old enough to spend much solo time in the Twin Cities, but I had similar experiences of urbanization: the sensation of being overwhelmed but also exhilarated was formative to my evolution from a suburbanite into an enthusiastic city-dweller. You have a very vague sense of "The Cities" when growing up, but can't really understand how day-to-day life feels there until you're living in it. Lauren is in the early stages of that transition, but you can see that the spark has been struck, and she clearly wants to spend the rest of her life living in the city.

I didn't particularly identify with any one of the characters, but I was really struck by a couple of elements of Blake. I had a hard time understanding her at first, in particular her obsession with infinities, where I had a hard time tracking what she was saying and what she meant. Then, after some reflection, I realized that the sensations she was describing felt exactly like how I felt about eternity when I was a kid: the sensation of drowning, of fear, of desire and hopelessness bound together. That's something I never really resolved, just kind of got used to ignoring, but re-reading Blake and Laurens' thoughts brought it back again, which was really cool. It also made me think about infinity and eternity in general... I've never really compared them before, but they're kind of the same concept, perhaps with infinity existing in the third dimension and eternity in the fourth. The idea of "orders of infinity" is fascinating as well, makes intuitive sense to me, and caused me to think about applying that concept to eternity.

I'll try to wrap up this thread of "Things In This Book Reminded Me Of Myself" with one last element, the collaborative story. I'd completely forgotten about it, but a similar project formed a major part of my junior high school years: an ongoing serialized comic that a few friends and I passed around, gradually developing a sprawling plot with its own mythology. We had similar senses of ownership over the characters in it, although in our case we also directly appeared in it as well. Like the version in this book, ours was a "Multiverse", and we explicitly shifted between various dimensions and realities as the story demanded. Anyways, seeing that pop up in the book made me wonder, how common is that sort of collaborative experience in school? I don't think I've seen another portrayal of it in fiction before, and I'd always thought of it as something unique and special that we did; but I also haven't ever really talked about it before, so maybe it's fairly common and just something that people discard / forget as juvenilia?

OK SO ENOUGH ABOUT ME BACK TO THE BOOK:

Uh, I really liked it! The central characters are vivid and compelling, the ancillary characters believable and interesting, and I felt super-engaged by the storyline. The actual writing is terrific as well. There are some really funny bits in there, terrific little phrases and observations and analogies. The story gets more serious as it continues, and the writing gracefully follows that arc, showing a lot of thoughtfulness and compassion for what the characters are going through.

It was really interesting to see a romance - heck, multiple romances - play out largely through the medium of instant messaging. I suppose that must be the norm now, but I don't think I've really encountered it in fiction before: I'm used to characters almost entirely advancing their relationship via meeting up in person and talking face-to-face, with perhaps the occasional 19th-century epistle for dramatic emphasis. Electronic communication really is significantly different, and I thought the book did a great job at capturing its unique rhythms and concerns. Seeing that someone is typing, and your stress level rising as you anticipate their reply. Seeing their status shift from "Online" to "Idle" and wondering what they're up to, trying to divine their physical situation from the terse digital status: did something come up? Are they avoiding the conversation? Digital communication is a form of connection, something we can draw solace and comfort from; but it's also something that's new, that we as a society haven't fully adapted to yet, and there are many other layers of uncertainty that get added when you remove non-verbal communication, facial cues, and the other elements that we're evolutionarily conditioned to use in navigating relationships. Anyways, I thought that Lauren's internal thought processes were really great at portraying how this type of connection does and does not work.

This book is a romance, and also seems like a coming-of-age story, but with an interesting set of concerns. Coming-of-age books are often about the protagonist trying to determine their identity, what kind of person they want to be. In some ways, Lauren's identity is fixed before the book has even started: she realized years ago that she is a lesbian, and never wavers in her determination to get a girlfriend. Other aspects of her identity are immutable, like her Jewishness: she isn't especially enthusiastic about that, but it's an undeniable part of her. She can choose how she wants to interpret and respond to that part of her heritage, but she can't just decide to not be Jewish any more.

And then there are the parts of her identity where she knows what she wants (or doesn't want), but that are in tension. Most of this is driven by her father: will she be a dutiful daughter and wife like he wants, or a high-powered successful person like he is, or a creative person like she wants to be? She has a clear preference here, but it is a choice, and one that's very painful no matter what she chooses.

Part of becoming an adult is choosing, but another part is recognizing: discovering what kind of person you are. This is the plot element that probably comes up the latest, but it's very compelling, as Lauren reflects on her actions and her relations, trying to figure herself out. Is she cold? Is she a bad girlfriend? Is she trustworthy? These questions have a lot to do with interpretation, of self-reflection. You can sense Lauren growing much more mature as she wrestles with these aspects of her identity.

The major event that sets off this introspection is her breakup with Sierra. I was really impressed by how that plot evolved. On the one hand, the deterioration of her relationship with Sierra feels really abrupt and surprising: it seems like stuff is going so well, then Lauren gets together with Blake, and all of a sudden their love curdles. But, looking back over it, I think the author did a great job at setting this up: there are tons of little clues and signs all along that Sierra is bad news, Lauren is just too giddy and smitten to pick up on them. Stuff like how she's completely oblivious about and uncurious about Lauren't Jewish faith and her not-quite-kosher diet, for example: that doesn't make much of an impression at first, it's something you can just chalk up to Sierra being slightly spacey, but in eventually fits into a significant pattern of her narcissism.

Even though I, as a reader, was completely on Lauren's side throughout the tribulation, I thought her self-flagellation was very understandable... she didn't deserve any of her treatment, but of course someone in that situation would question herself and look to her own shortcomings in trying to make sense of everything that had happened.

I'm really glad that stuff worked out! It's interesting that the passionate connection came so early, and the book ends with a stronger focus on intimacy and commitment. I feel slightly concerned in the big picture for the two of them - while Lauren's dad is wrong about most stuff, he's right that it's difficult to make it in the world under those circumstances. But in the small picture, I'm so happy for the two of them, and I think these two not-quite-perfect people are perfect for each other.

Yeah... good book! While I hadn't intended it this way, it's also kind of whetting my appetite for the new Life Is Strange expansion that drops on Thursday. Much like LiS, I can see myself continuing to mull over this book and root for its characters long after finishing.
Posted by Christopher Charles Horatio Xavier King III, Esq. at 8:45 PM