Part seventeen in a weekly (💬) devlog.

Milestone passed! I wrapped up work on the climax, hurrah, which means I've finished a rough first pass at all the scenes in the game, double-hurrah.

What that means and does not mean:
I'm now starting on that last bullet, the stuff that can occur across multiple maps. I've learned from prior experience that it's best to do all of these at once instead of doing it for each scene as I come to it: otherwise, I end up forgetting to do them for some scenes, losing track of which ones are done and which aren't, catching bugs late in development and then needing to update a bunch of other stuff, and other annoyances. Instead, it's best to do it once in a test scene, make sure it's working, and then set up for every scene in the game, specifically testing the integration.

The specific features that I'm working on now are barks and banters. Let's look at them in a bit more detail.


A "bark is a short phrase that a character utters during the course of gameplay, usually in response to some action or event. Examples include "Nice hit!" and "Ouch!" They're a staple of party-based RPGs, and I've been doing them since the very first Antumbra episode.

For the most part, making a campaign is very time-consuming, but not especially hard. I decide what thing to do, and then I carefully do the thing, then I test the thing, then I move on to the next thing, and repeat until the game is done. Barks are one of the only features of my campaign that actually involve some cleverness on my part.

The goal here is to randomly fire off a phrase, unique to the character, when they defeat an enemy NPC. I start by defining all of the available phrases. Shadowrun doesn't have support for arrays, but I'll accomplish something similar by appending integers to well-defined strings, forming a DIY lookup table. 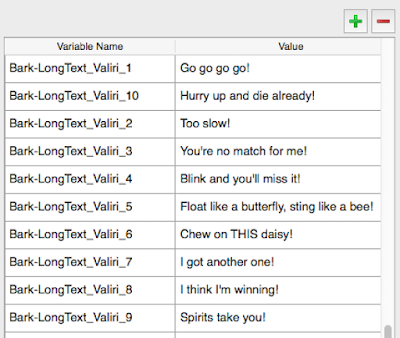 Next, I set up the trigger.

Let's break this down, piece by piece.

I follow a similar process for other types of barks, such as crew reactions when they are downed and dying.

Once I got it working, I adapted it for the other crew members, tested them, and then copy-pasted them to all combat scenes in the game. There's no such thing as a "global trigger" in Shadowrun, but if you set up your triggers so they don't rely on scene-specific elements, then it's trivial to copy them throughout the game and be confident that they will work (though testing is still always a good idea).


Banters are in-scene conversations between crew members. These are also fairly common in party-based RPGs, particularly the BioWare ones that I love so much. I've been doing versions of these as well ever since the Antumbra days, although mine got more sophisticated in Caldecott. 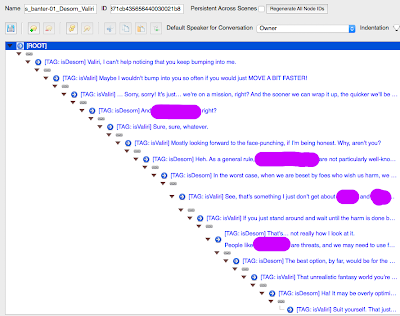 This particular conversation exclusively occurs between two crewmates, without any intervention from you. Other banters might include dialogue responses from the player character, or a third crew member might jump in. They're designed to be fairly generic, so they make sense regardless of which particular scene it ends up firing on.

Note that each line is spoken by a TAG'd character, set to the crew member's tag. Again, this is important since crew members will usually (not always) be loaded by player spawners through the hiring interface, so we can't directly assign an actor to the line.

Unlike barks, which can repeat multiple times, a player should see each banter no more than once over the course of a game. To ensure this, we create global variables that will track which banters the player has previously seen. 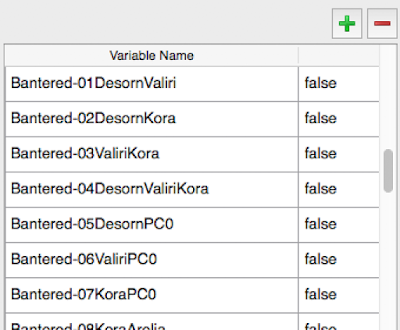 These start as "false", we'll flip each to "true" once they've been seen.

Trigger time! I follow the "tripwire" design of banters, similar to what's used in Dragon Age: Origins. When your player crosses an invisible line in the map, we check for available banters and display one of them if available. That process starts like this:

Speaking of which, let's look at one of those triggers.

I've mentioned before that one of my design changes from Caldecott to CFiC has been to do most of my missions in single scenes. One side-effect of this is that I now want to be able to fire multiple banters (specifically two) in a single scene. The best way I've found to do that is to just create separate "A" and "B" lines of banters, each with their own separate tripwire. Both rely on the same dialogues and global variables, but use separate triggers, so they can fire independently without interfering with one another.

As with barks, I set this all up in a test map, ran a ton of tests (selectively loading other crew members and toggling the "Bantered" booleans on and off) until I was satisfied, then copied to all other scenes. There are a lot of triggers involved, but they're fairly simple, and I don't expect that I'll need to update them. (Though I will not in passing that, unlike in Caldecott, I do have separate "sets" of banters this time around separated by acts, which lets me write banters that assume certain events have or have not occurred. Which is to say, there are more than 7 possible banters, it's just that this particular scene only has 7 banters available.)

And that's that! This is all coming together very nicely and smoothly, mostly because my process is very close to what I did on Caldecott and I've already invested the necessary time into conceptualizing and debugging this kind of design.
Posted by Christopher Charles Horatio Xavier King III, Esq. at 7:29 PM