Part fifteen in a weekly(👻) devlog.

I'm not much of a horror person, but for some reason I really enjoy creating horror-tinged levels in my Shadowrun mods. This week I've been working on the last one that I'll ever make, and it's been a blast. After making several of these games, it becomes increasingly challenging to think of creative new puzzles to solve and creative new boss fight mechanics, but there's a well of inspiration for creepy scenes that has yet to run dry.

This particular scene was inspired by my original ending for this campaign. Not to say that the new ending is all sunshine and daffodils, but my original vision was much bleaker. I chickened out of that conclusion, but I loved it, so I recycled the shape of the arc and the interior beats and morphed them into this more-or-less stand-alone mission. At the risk of sounding arrogant, I think it's the best one I've created yet! I get a weird thrill from the subtle and gradual slide into dread, which I think comes across really well here.

The scene is taking notably longer to create than I had expected, but I have zero regrets, since every minute I spend in it is resulting in something that feels tighter and more effective. Atmosphere is important in any Shadowrun mission, but it's especially important for the creepier ones: you're trying to guide the player into a certain mental state, and you have a better shot at succeeding if you use all the tools at your disposal: dialogue and lighting and sound and graphics and everything. For it to work, it needs to be synchronized and logical, so I end up doing a lot of iterative testing, figuring out the appropriate gaps between events to make it work. 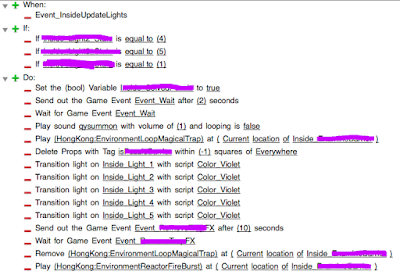 There are a few tools at my disposal when I want to create an effective atmosphere, whether for horror or something else. In no particular order, they include:


These can be run by a simple trigger command, Gameplay -> Play Sound. It's easy to browse through the drop-down and look for a sound that will fit your scene. 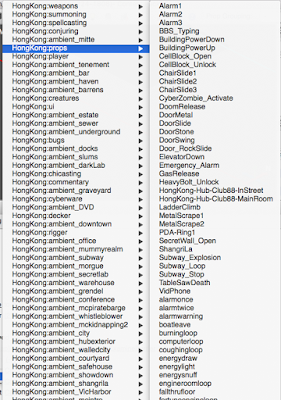 One really nice utility for evaluating sounds, especially when you're getting familiar with the library, is the Aztechnology Aural Mindscape mod.  This is a standalone "campaign" that lets you easily play all of the sound effects and music in the Hong Kong campaign.


Great when you want an on-screen character to visually do something: act surprised or fall down or shrug or whatever. You can browse these through the Actor Play Animation from Manifest command. Almost everything is included under the Hong Kong General category. There are a lot! The ones with "idle" in the name are persistent, so the actor will continue to hold the pose until they do something different (either from a subsequent Play Animation command or the result of a standard walk, attack, etc.). The non-idle animations generally perform a single discrete action, like throwing something, and then reset to the idle standing state. 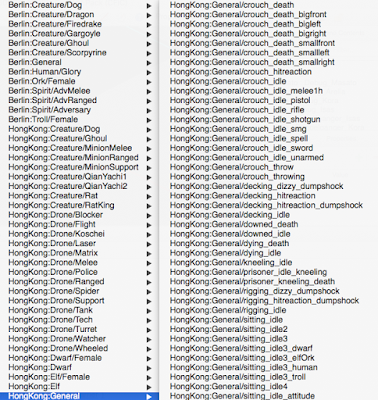 One important note: playing animations from a manifest will only move the actor's body, nothing else. For example, if you play a spellcasting animation, your character will move their hands and arms as expected, but you won't see any colorful sparkles. Sometimes that's what you want, sometimes it isn't.


If you've been making maps, you're probably already familiar with prop FX, which you can drag into your scene to add dynamic atmosphere: billowing green smoke or flashing sparks or glowing mana. I've been using those forever, but I've only recently started using scripted FX. These usually perform a single discrete effect in the environment: a fiery explosion or crows flying away or a burst of electricity. A few of them can be played directly on an actor. For example, playing the "Smoking" animation from the manifest will just simulate the arm motion of smoking; playing the "Berlin:LoopedSmokingIdle" FX on an actor will produce the same motion but also add the lit cigarette glow.

Unlike playing animations or sounds, you can't browse through FX, you need to know the name of the effect. If you know where it is used in one of the official campaigns, you can just open the scene in the editor and look it up from the trigger. I've found it most convenient to search the wiki page for something that looks promising.

And, uh, that's it! These are too spoilery to show off, but I've been really happy with how things are coming together. I'm using a few more animations and sounds than in Caldecott, and a lot more FX, and I think it's helping CalFree In Chains to be my most atmospheric campaign yet.
Posted by Christopher Charles Horatio Xavier King III, Esq. at 8:24 PM