Before The Storm musings

I've been noodling more on Life Is Strange: Before the Storm and working my way through a few Let's Play videos, and had enough add-on thoughts for a short follow-up post. So, here it is!

MEGA SPOILERS (for both Before The Storm and Life Is Strange)

I've started to reconsider my previous strongly-held anti-Nathan sentiment. Most of the playthroughs I've seen have gone the same way: standing up for Nathan when Drew bullies him, having him attack you and Samantha afterwards, getting blamed for that same incident by Wells, and then seeing him melt down after getting browbeaten by his father. I'm the only one who explicitly advised Sam to stay away from him, but most players either avoid him altogether or more gently ask her to give him space. Nathan freezes on stage, forgets his lines, becomes a laughingstock... you feel bad for the kid, but maybe also a little like he deserves it. 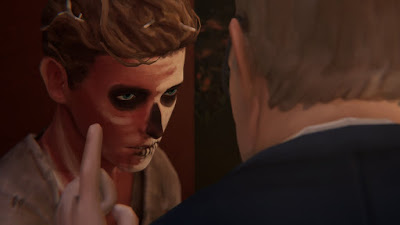 But, the thing is: if you advise Sam to encourage Nathan, then the outcome is completely different. It turns out that Nathan is actually a really talented actor! Once his head is in a good space, he's confident and smooth. He has great physical presence, embodying Caliban's "primitive" stature, and is basically Rachel's equal in delivering Shakespeare's lines.

Of course, seeing that made me feel bad. Why had I withheld such a positive experience from this unfortunate boy? I think the answer points back to one of my central questions / concerns about this season: is the canon fixed, or variable? If it's fixed, then we know where Nathan's story leads, and the best course of action is to minimize the number of victims. But, if it isn't, then shouldn't we be doing everything possible to keep it from happening? Helping Nathan find confidence in himself seems like it would go a long way in his desperate quest for withheld approval that sends him down the spiral that leads to Jefferson. 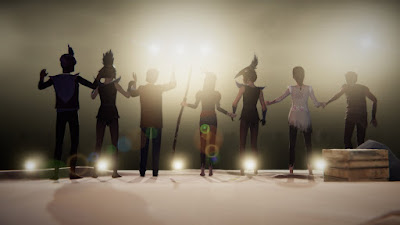 My sympathy is still on behalf of people who get hurt, more than people who hurt themselves and others, and so I think that my desire for Samantha's own happiness wins out over my desire for Nathan's self-actualization. It helps matters somewhat that Nathan is so hostile at rejecting overtures for assistance. But, really, couldn't we say exactly the same thing about Chloe? Their weapons are different - she uses sarcasm and humor to deflect, while he uses his privilege and insults to attack. But, fundamentally, both of them have built emotional armor around their broken hearts and reflexively fight off anyone who threatens their sad solitude. In a sense, Rachel's constant presence and encouragement are allowing Chloe to finally shed some of that armor and confront her underlying issues. It wasn't easy, and isn't easy: she needs forgiveness from Rachel after she messes up, and she receives it. Having received this grace, it seems cruel to deny the same to Nathan, even in the face of his hostility.

I dunno. This is a hard game!

In retrospect, the "what to do with Nathan" choice is a hard one, but in the moment I didn't really hesitate in my answer. Like a lot of people, the big hard choice for me in Episode 2 was the confrontation between Drew and Damon. That was a tough one, but for me it ended up being more analytical than emotional, as I didn't feel particularly invested in either character. Reconstructing my thought process, I think my decision tree went something like this. Of course, I felt awful afterwards. I think everyone does - after seeing all the ways it can play out, you'll never feel good about your choice (although they do a good job at providing some comfort later on via text messages in both scenarios). I assuaged my guilt somewhat by handing over the money. But... I dunno. Thoughts:
Heh... next to the Drew decision, the one that I spent the most time agonizing over was whether to steal the bag of weed from Frank's RV. It was a total push/pull between "this is totally what Chloe would do!" and "this is a horrible idea!" And of course, it totally doesn't matter at all. 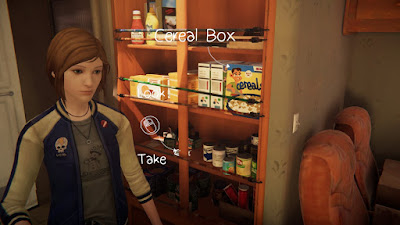 I haven't written much about the actual gameplay of BtS. The focus is definitely on the conversations, but the puzzle designs are really nice, and I think I prefer them to the ones in Season 1. They're usually set up in such a way that you can feel clever without being too obtuse. I felt really proud of myself when I got the combination to Drew's locker on the very first try: it's a solution that's totally rooted in these characters' personalities and priorities, which is a really nice trick. (And, from watching Let's Plays, it also has a very graceful "failure" path that keeps the story moving along without punishing the player.)

Likewise, the junkyard scavenger hunt was really well designed, since you will have already visited almost every area of the junkyard prior to starting the quest, so the puzzle ends up being more about remembering things ("Oh, yeah! There was that Christmas wreath!") rather than aimlessly searching. Watching Let's Plays has also shown just how many solutions to this there are, which is really impressive. And, again, good design - it doesn't matter if you don't find the area behind the shed, because you can solve the puzzle elsewhere on the map. 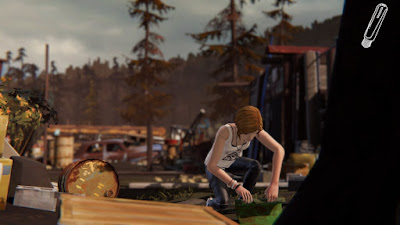 So, yeah... there haven't been any trial-and-error puzzles like the bottle quest in Season 1, and also no brain-warpy ones like dealing with the alarm in Wells' office (which is obvious in retrospect but not at all intuitive).

The puzzles in particular and the gameplay in general aren't especially hard or challenging; unlike Season 1, I've never been tempted to look for a walkthrough or spent more than a couple of minutes on something. But I think that's fine. It keeps the focus on the story, keeps the momentum going.

I hadn't really thought about this while playing, but there aren't any "Game Over" states in Before The Storm. That could occasionally happen in LiS: if someone got shot, or Frank's beans spilled, or you got spotted by a security guard. It wasn't particularly significant then, just something you would rewind from, but was still a possible state to get into. In contrast, BtS never really has failure, just different branches out of an event. 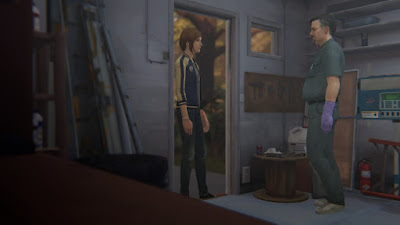 Samuel wins the Dana Ward Bad Voice Award for Episode 2. He's super well-written here, and delivers some of the best lines in the series, but is one of the most glaring substitutions. It's a bit harder to buy varied voices for the adult characters than the teenagers, since you wouldn't expect their voices to change as much over three years. 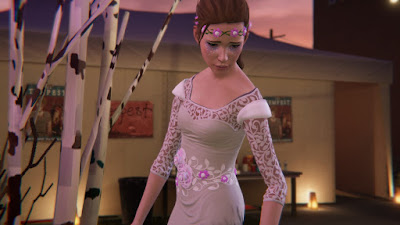 In contrast, Dana actually sounded decent this time around... I'm not sure if that's because I've gotten used to her new voice or if the actual performance has changed.

Rachel's "No!" after Chloe suggests that they buy wine from a liquor store.
Rachel's "Nnnooooo..." at the park.
Chloe's "Don't tell me what to do" while exploring the junkyard on the second day.Chloe's "I miss him." during the third dream.
Chloe's "I'd say: 'You're super-f***ed!'" before the play.

Edit: Heh... after coming up with my Top Five, I managed to catch one of Strange Rebel Gaming's streams while live for once. Like I mentioned in my last post, she's one of the most perceptive players I've seen, and that continues to be true for Episode 2: I've seen the full episode multiple times now across several playthroughs, and she still catches stuff that I'd never noticed. I'm thinking of it now in particular because, when she heard that "Don't tell me what to do!" line, she immediately noticed what was odd about it: unlike every other line in the junkyard, it doesn't have the slight echo effect that's used to denote Chloe's interior thoughts. I now think that that may have subconsciously prompted me to consider that an especially significant line. One other awesome thing she noticed that I had completely missed was how Chloe never used the word "fascist" in the first episode; then, early in the second episode, she hears Skip say it, and then she uses it frequently through the rest of the episode. As Bri points out, that's such a teenager-y thing to do: discover a word and then whole-heartedly embrace it. What I had noticed was that Chloe misspells this word in her journal: she signs one of her notes as "Chloe, Queen of Facists" instead of "Queen of Fascists". I'd initially assumed that this was a production error; after hearing Bri's observation, though, I now suspect that it's deliberate. This really is a new word for Chloe, so of course she doesn't know the correct spelling yet. Eventually she'll use it in a text message, and will see auto-correct fix it, and from then on will use the right spelling.

That's it! Feeling increasingly bummed that we'll only get one more episode of this awesome series, but given all the thoughts and emotions it has already evoked, I'm confident that it will stick with me for years to come.
Posted by Christopher Charles Horatio Xavier King III, Esq. at 6:38 PM