Part twenty-one in a weekly(🎵) devlog.

Standard development disclaimers apply. This is pre-Alpha content, everything is subject to change, features may not be present in the final version, there's a strong chance none of this will ever be released, etc. etc.

I was fighting off a nasty cold this week, so I didn’t get as much done on the campaign as I would have liked. BUT, I did finish my first pass through the hub, so that was pretty good! That means running through all of the various side-quests and romance arcs that I mentioned in my last couple of posts, on the actual final map for the hub, and eyeballed everything to make sure it looks decent.

At a high level, I’ve now completed most of the “big things” and am now working on the “small things”. I have a massive Google Doc titled “CFiC Tasks” which is a running list of everything that needs to be done before I can release. I had a lot of stuff in there months ago when I kicked off the project, and have added to it as new problems or ideas have risen. I’m also knocking some things off, although up until now that’s been a slower rate than things getting added.

Anyways, most of the items I’ve been working on until now have been single lines like “Write all the dialogue” and “Create all the maps” and “Implement all the combat”, where a single sentence implies more than a month of work. Now, those few big things are done, and instead I have a billion smaller things to do. So I’m now looking at items like “Add karma rewards” and “Make sure X’s ability works properly” and “Write the epilogues”. Almost all of those will be a day’s worth of work or less, but there are a LOT of them to get through.

Still, it’s a very good place to be at. I have a really high sense of velocity at this stage of the project, since I feel like I’m constantly knocking stuff off and fixing specific things, instead of continuing a Sisyphean struggle. The flip side is that it will eventually start to seem like a never-ending stream of concrete tasks, so my mood will likely flip back and forth between “This is almost done, I’m so excited!” and “This will never be finished, I hate everything!”

I’ve been very disciplined about scope creep, and it becomes even more important now. There are an infinite number of good ideas out there, an infinite number of things that could be better, and unless I say “No” to them I’ll never be finished. There are a handful of exceptions, when I spot something that threatens the game as a whole (from a gameplay or moral standpoint), but I set and try to maintain an extremely high bar.

Anyways. What I’m working on right this second is music selection. This used to be my favorite part of making modules, although that’s gotten a lot more complicated in the SRHK era. Still, it does contribute an enormous amount to the overall mood and impact of the game, while requiring proportionally little time on my part since the musicians have already done the heavy lifting. My role here is more like a curator, looking through the limited menu and deciding what to present when.

This can initially seem like an overwhelming task. There are 47 potential music tracks in SRHK, which I need to distribute over (cough, cough) missions. Ideally I’ll minimize repetition, and try to keep repeated tracks as far apart as possible. Maybe more importantly, I want to pick tracks that work well for each scene. If you’re surrounded by disciplined corpsec forces, you’d expect a different vibe and sound than if you’re fighting off wild monsters or enjoying a drink at the pub.

I handle this by - you guessed it! - creating a spreadsheet. Each row lists a separate track of music. In the columns, I’ll identify the following.

For this process, I’ve been taking advantage of (and very grateful for) the Aztechnology Aural Mindscape, a nifty stand-alone utility campaign that makes it very quick and easy to test music tracks. I can run through all of them back to back without needing to modify and debug my own campaign. I’ll typically listen to each track twice through, fill out the row in my spreadsheet, then move on to the next one. 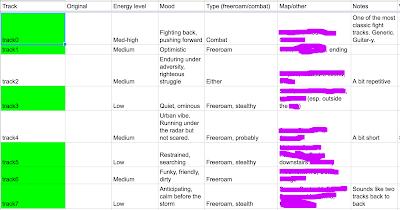 After this, I make another sheet listing out all the slots I have for music in my own campaign. On a simple map this will just be “X Freeroam” and “X Combat”, but for some larger maps I might want different music for different areas, and in a few cases I might want a special tune for a particular character or scene. I refer back to my first sheet as I go through and slot things in, top to bottom. I’m mostly picking good fits for each one, and also keeping an eye on if and when I most recently used a given track, so it hopefully won’t be too repetitive for the player.

The final step is to actually add them in. Setting up the basic music is really simple, just add the tracks to the camera regions. If you have multiple regions and want to share music, you can leave the music blank on subsequent regions: the previously-playing music will continue playing into the next region. 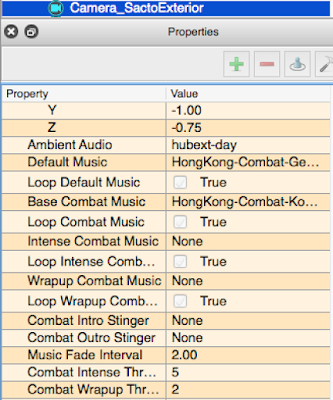 The engine automatically handles transition between the default (legwork / freeroam) music and combat music. I typically keep the defaults for all of the settings like the fade interval (how long the transition between two tracks takes, during which time you can hear both playing). For CFiC, I'm not planning on using the "Intense" (Int2) and "Wrapup" music, in an attempt to get some more variety across a larger number of scenes. Oh, but note that by default the option Loop Default Music is disabled, which is almost definitely not what you want.
Edit: After more thorough testing, I've found that the best configuration for a single music track in combat is to repeat the track for Base, Intense, and Wrapup, and set all the thresholds to 1. This mirrors how HBS often does their Matrix music. The above screenshot works in general, but can lead to drop-outs and silence in some cases.

You can also control music via trigger commands. I do this sparingly, but it can be a really cool technique: in Corona / Antumbra Saga, I used musical themes specifically for Hans Brackhaus and for Tabitha, so their distinctive tunes would play when they appeared on screen or when their influence was being felt. There aren't as many opportunities for this in Hong Kong due to the more limited track selection, but just shifting from one piece of music to another can have an impact: during a particularly surprising moment in Caldecott, I dropped out the music entirely so a brutal scene would play out in silence, and then kicked back in with a high-energy track as you and your team dealt with the aftermath.

I don't do this too often. It's a bit tricky, there are few items at my disposal, and it's a classic source of bugs. In particular, the engine can get confused if you're shifting between autoplay combat music, triggered scene music, and so on; in general, stopping your triggered music will cause the region's music rules to kick back in, but the more stuff you're trying to do the greater the risk that the player will end up hearing no music at all. (There's still a lingering bug in the climactic fight of Caldecott for this very reason.)

Yup! Music is awesome, I love it a lot. I'll probably do another post later on my music, the fuel that's kept me going during this insane project.
Posted by Christopher Charles Horatio Xavier King III, Esq. at 5:48 PM