I'm looking forward to reading books again! All of my leisure time has been devoured by work on my Shadowrun campaign, and now that that's finally out, I'm eager to spend more time catching up on novels and exploring for new things.

For months I've been working my way through Wild, Cheryl Strayed's account of backpacking the Pacific Crest Trail. I'd previously seen and loved the movie adaptation and was looking forward to the book. 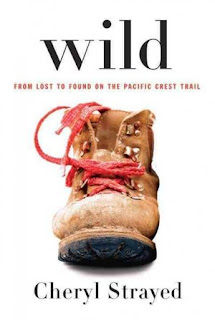 I was surprised by just how similar the two are. I think every single incident in the book is depicted on the screen: even minor obstacles like navigating around a fallen tree trunk or a brief encounter with a fox made it across. More impressively, Cheryl's reminiscences are all portrayed in flashback scenes; I think the timing on these may be slightly different, but they definitely cover the same ground and give the same understanding of these people.

Once I realized how closely the movie tracks the book, I started dreading the encounter Cheryl has with the two creepy hunters. I'd remembered it happening later in the movie, but had forgotten that it was one of the very last things. This feels a little disappointing narratively, since it's a rare moment of fear that arrives after Cheryl has grown into the accomplished and strong woman who completes the hike. If someone was writing fiction about this hike, that would have happened around the midpoint of her journey, with her further growth occurring after that incident. But its placement drives home that this isn't fiction, that lives are messy, that unpleasant things can happen at any time and the world won't always acknowledge our accomplishments.

And Cheryl is accomplished. She is so much more prepared, so much more talented, so much better than these two jerks. But they're so enveloped in their awful stone-age mindset that they automatically discount her personhood. I wonder if they feel threatened by her, if they can sense her strength highlighting their weakness, and if that contributes to their behavior.

It's been over a yaer since I saw the movie, and one thing I can't recall is whether it used voiceover narration. I feel like it didn't: I think Cheryl may have muttered to herself occasionally, but we don't get direct access to her thoughts. Which makes the adaptation even more impressive to me, since we can still see all of her emotional pain and striving, conveyed just through Reese Witherspoon's expressive performance.

On a technical level, I was impressed once again by the sheer effort of Cheryl's achievement. Some people might discount her journey because of bypassing the High Sierras and stopping at the Bridge of the Gods, but the important thing about PCT and other thru-hikes is that each journey is personal and individual. What she accomplished was amazing, and it leaves me even more hungry to do this hike myself.

There's plenty of caution in here, though. One element that I don't remember from the movie was Cheryl's toenails gradually turning black and falling off: that's such a personal and specific injury, and I winced each time it happened. I was reminded again that, unlike Cheryl, I live in a time with widespread Internet access with easy access to a vast amount of online knowledge about packing and preparing for such a trip. Even if I were to follow in her footsteps, I'd have a much easier time of it, thanks to the work of trailblazers like her.

I was moved once again by the epiphany Cheryl has near the end. What if this had to happen? All of it? All of the horrible things that happened to her, but also all of the horrible things that she has done, all of the bad decisions and cruelty she has inflicted? Because those things led to her being here, now. That doesn't mean that those things were good, but she can finally forgive herself. They led to her taking this journey, to her finding herself, and eventually to falling in love and starting a family. It's a hard-earned realization, and all the more powerful because of its price.
Posted by Christopher Charles Horatio Xavier King III, Esq. at 7:06 AM