My brain is weird. Reading Ammonite reminded me of The Company, which reminded me of Kage Baker, which reminded me that I never finished her Company novels, so I recently dove back in with the second entry in the series, "Coyote Sky". It's been several years since I finished The Garden of Iden, and my memories had faded somewhat, but I remembered enjoying the writing and the world, and quickly got back up to speed. 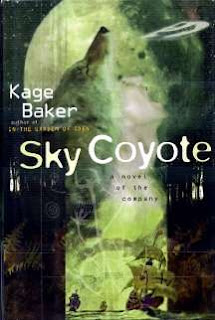 Again, my memory is a bit fuzzy, but I think that Sky Coyote is a funnier work, while The Garden of Iden was more focused on romance. This is mostly due to the narrators: Iden was narrated by Mendoza, while Sky Coyote is narrated by Joseph, who was a compelling character in the earlier book. Their roles are now switched, with Mendoza occasionally popping up and making an impression, but Joseph both drives the plot and provides the overall tone of the story.

Joseph is a lot older than Mendoza, by tens of thousands of years. He's much more cynical: near the end of the novel he has a line like "As I always say, in a hundred years who's going to care?" It's not that he doesn't care about anything: he's surprisingly loyal to the Company, takes pleasure in art (Warner Brothers cartoons, certain foods and beverages, works by Dashiell Hammett), and is fond of specific employees. But he's seen that everything fades and is destroyed, and learned the folly of attaching his happiness to transient things, so he tends to be unsentimental, even while appreciating things in the moment.

The plot for this book felt a bit looser than Iden. The action sort of drifts from New World One up to California and the Chumash village, but everything tends to go fairly smoothly and according to plan, with short-lived obstacles. It's still engaging, though, thanks to Joseph's fantastic voice and commentary. It might feel light as a stand-alone novel, but it does a great job at extending the overall arc and building out the world more.

Joseph is a master at interacting with every group of people, from Company immortals to Company mortals to the native peoples he encounters. The most interesting relations are those with the Chumash, a native Californian tribe: his main mission for the book is to save them from extinction and capture their culture for posterity. Like a lot of people, I have a fairly simplistic mental image of what pre-Columbian native American culture looked like: either a peaceful and idyllic life sustained in harmony with nature, or a powerful and violent society. The Chumash, though, are surprisingly modern: they have guilds, and trade agreements (along with an understanding of monopolistic practices and collusion), along with labor unions and vocational schools. They may live in huts and craft canoes, but their social structure is virtually identical to ours; even at the familial level, they often divorce and remarry, and a lot of them don't much care for raising kids.

The dialogue here was especially funny, mostly in Joseph's statements but also how the Chumash spoke amongst themselves. I found myself thinking of Christopher Moore, who also deploys a breezy, humorous, anachronistic style of patter in unexpected places.

This was a much faster read than I expected, but I enjoyed it! I'm increasingly hooked on the Company, and looking forward to where the series goes from here. The mysteries have grown deeper in this book, and I'm curious to see answers to some of the questions that have been raised.
Posted by Christopher Charles Horatio Xavier King III, Esq. at 7:56 AM