It will surprise absolutely nobody to learn that I've been thinking about Life Is Strange: Before the Storm. I don't really have a final thesis yet, but there are a few specific things that I didn't mention in my initial post that seem to deserve an explanation.

I really appreciated the climax between Chloe and Damon in the old mill. I was struck by how refreshing this crisis is: virtually every video game uses life-and-death situations, where the stakes are saving your own life or the life of a loved one or the lives in a nation or whatever. Instead of a gun, here we're worried about a needle; instead of a murder, we're worried about an addiction. Seeing this climax made me realize just how limited our storytelling imagination is: everything becomes a matter of tabulating and trading off lives. (And I intentionally say "our" - I'm 100% guilty of perpetuating exactly that narrowly reductive kind of scenario.) 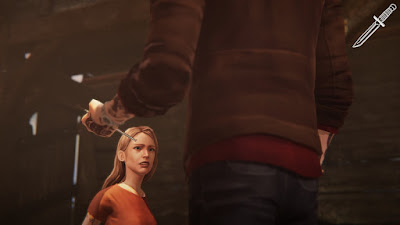 Many players seem to be disappointed in the ending, and I can see why people would be bummed that Chloe blacks out and doesn't even witness the outcome of the fight. But I actually kind of liked that, since it kept the threat to Sera's well-being and to Sera's relationship with Rachel front and center, instead of overriding it with the traditional battle-to-the-death encounter. And it's probably even more intense because it's something that we haven't seen hundreds of times before in many different games; it's also more relatable to our lives, as most of us probably know more people who have struggled with addiction than people who have been murdered. I found that Damon's threat was incredibly chilling: on its surface, what he was going to do to Sera is better than killing her, but it represents a huge burden that she will need to carry for the rest of her life, and will produce far more misery and heartache over many years than a simple kill would have.

Shifting gears to what happens right before the mill: the overall idea of the roadside conversation between Chloe and William was nifty. It seemed ambiguous whether this was happening in the dream world (Chloe dozing off in the truck) or the real world, and I loved the note that it ends on, where Chloe basically realizes that her mind isn't working quite right but that that's OK. That said, the actual content of the conversation felt a little ham-fisted, as they start asking questions about trust and history. After finishing the game, I eventually realized that they were setting up the "sad truth or happy lie" choice that ends the game, but it doesn't seem like they've really laid any groundwork to present William as a less-then-awesome dad. It's a good theme, but felt like it came from out of nowhere. 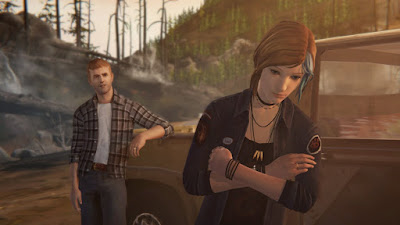 As some other online commenters have pointed out, though, it is a huge mental obstacle for Chloe to realize that her dad may have had faults. She is accustomed to seeing people as all-good or all-bad. William is good, and therefore he must have been perfect and cannot have had any flaws. David is bad, and therefore everything he says and does is wrong. That's a very common way of looking at the world, especially among children: any hint that one's mother is imperfect will be met with furious denial. Much as Max grew up and had to come to terms with the world's flaws, Chloe is growing up and (grudgingly) accepting the nuance in people around her. David may be an awful jerk, but he's still capable of genuine sentiment. William may have been a great dad, but they would still have eventually fought.

I think that the original Life Is Strange was primarily about how the world is not perfect and cannot be made to be perfect. Its big choice is between either accepting the imperfections in the world to minimize harm, or accepting the price of making changes in the world. I think that Before the Storm is more about understanding than about acceptance. Chloe constantly rages against the unfair and bad things in the world, and the game never seems to suggest that she's wrong to do so. Chloe's journey is more about seeing the complexity and moral grayness of the people around her. (Applying that grayness to Rachel never happens within the game, outside of possibly the conversation with Eliot, and is left as an exercise for the reader.)

Of course, like everyone else, I've mostly been thinking about the very end post-credits scene. Upon further reflection, I've decided that it's a really good ending for hypothetical future players who play Before the Storm prior to Life is Strange. They won't have any association with what's happening, any more than we did with Damon demanding "WHERE'S MY MONEY?!" at the end of E1 or Chloe frantically trying to start the truck at the end of E2. From that perspective, the cell-phone scene would be really effective as a stinger for the "next episode". 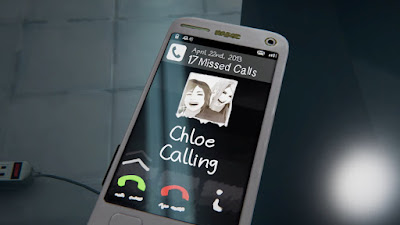 But, to all of the current players who DO know where the game goes, it feels unnecessarily cruel. Deck Nine already got the message across a lot more artfully with the star conversation in Rachel's bedroom. Choosing to close the game out this way seems sadistic.

That said: I read one really interesting comment that prompted me to rethink this somewhat. As I noted in my initial review, I didn't really hesitate at all over the final choice about whether to tell Rachel a comforting lie or the brutal truth. Well... isn't that really what the ending is all about? It's easy enough for me to say that Rachel needs to know the truth, that it will be better for her in the long run; but, when I'm confronted with the awful truth of what happens to Rachel, I find myself wishing that Deck Nine had told me a comforting lie instead. Thinking about it in those terms has made me re-examine my earlier conviction: knowing how awful I felt when confronted with that gave me a lot more sympathy for what Rachel was going through on that hospital bed. (I really like the evil-but-clever suggestion some players have made, that the cell phone ending should only be shown to players who had selected the "Truth" ending.)

I'm still mulling things over. Life Is Strange is a very rare game that has become more important to me over time: when I first finished it, I thought it was a good game, and I've been surprised by just how much more of an impact it's had on me in the year-plus since I played it. Time will tell if that holds true for Before the Storm as well. 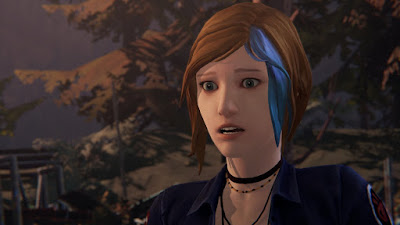 It was very cool to see that Hannah and Ashly are already recording for the Farewell episode; I'd thought that there might be a longish gap between the third episode and the bonus, but it seems feasible that we might be getting it within a few months. I'm less optimistic than before that the episode will be used to influence the later games' canon, but I hope that they can end on a graceful note.
Posted by Christopher Charles Horatio Xavier King III, Esq. at 10:33 AM