As much as I enjoy cyberpunk, I'm actually not incredibly familiar with the literature. I came to the genre late; apart from Shadowrun, I only started reading these books in the early 2000s, and haven't strayed far from the titans like Gibson. Recently, I resolved to seek out some of the lesser-known authors and round out my exposure. 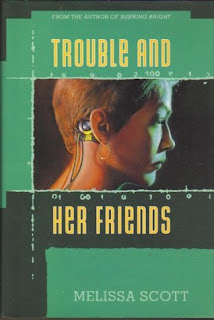 The first entry on that new list is Trouble and Her Friends by Melissa Scott. This is vintage cyberpunk, from the early 1990s, and is a nostalgic romp through an era I had largely forgotten. Many of the specific references feel dated - BBSs are important hubs of activity, hackers swap out disks while copying large files. But this era also had wonderfully lyrical writing: back before most readers had ever gone online, or even had a good idea of what that meant, authors used breathless metaphors, filled with sensations of speed and touch and lighting, to try and communicate how the digital virtual space felt. The sense of awe and limitless possibility shines brightly in these early books, something that has largely vanished now that those experiences are universal and mundane.

Considering how few cyberpunk books I've written, it's kind of funny that there are such strong ties between them. In particular, I'm very curious about how the word "Ice" came to be such a universal shibboleth. Various authors will refer to it as "Ice", "ICE", "IC", or, in Scott's argot, "IC(E)". In all cases it means an automated defense program, a digital adversary that blocks or attacks hackers and which must be overcome by programs of their own. None of these books are set in the same continuity, and I don't think there is any real-world basis for ICE, so it's interesting to see it pop up so frequently. I imagine it's a sort of tribute to prior authors, and perhaps also a nod to readers that they are on familiar, if not identical, ground.

The tech in "Trouble and Her Friends" is pretty cool and interesting. The element that stuck out the most for me was the brainworm, which I imagine as sort of like a wetware neural coprocessor. In this world, most hackers have "dolly-slots", the equivalent of a datajack: a port in their heads that they can run a cable into in order to interface with computers without needing a keyboard. The brainworm seems to essentially increase the available bus width for the computer/brain interface, allowing hackers to process more data. This makes them more effective, but also invokes prejudices in other people. That's one of the many things I enjoyed in this novel: tech doesn't exist in a vacuum, but is a part of culture and sub-culture, and, much like real-world arguments over Mac vs. PC or VI vs. Emacs or IDE vs. plaintext, the use of tools is interpreted as an indication of abilities, with different factions using those choices as an excuse to denigrate others.

Trouble (and her friends) are part of a younger generation that have implanted brainworms: it makes them better at what they do, so why wouldn't they? But the old guard hackers look down on them, saying that they aren't actually talented and succeed only through brute force. In reality, the old guard are mostly scared: there's some risk in the surgery, and they are afraid of change. They would rather keep the old mores in place, where they know that they'd be at the top, rather than live in the new world where they need to adapt to keep up. Because of their embrace of the worm and their sexual identities, Trouble's clique are often seen as outsiders; but, at the same time, they are hackers and are a part of the larger culture as well. I really enjoyed how the dynamics between these various social groups and alliances played out, as the same people will shift between being friends and adversaries depending on the circumstances. Have a beef with another hacker? I'll take their side. Now the cops are after you? It's time to circle the wagons, I've got your back.

Identity is a huge part of this novel. The main plot is set in motion years after Trouble drops out of the net and a new up-and-coming hacker steals her name. Calling him- or her-self Trouble, this hacker uses many of her old programs, but behaves atrociously, boasting about exploits and generally ticking people off. This causes all sorts of trouble for Trouble, who still has a criminal record from the old days, and sets out to reclaim her identity and clear her name.

Reading this book, I found myself surprised that this plot element isn't more widely used in cyberpunk, or in modern fiction in general. One of the defining features of online interactions is how tenuous our identity is: you're a name, and maybe an icon, and that's it. If someone takes that same name, how is someone else to know that it really isn't you? I've had low-key variations of that experience myself: for decades I've used the handle "Cirion" when registering on new sites, and I often get it, but occasionally someone else will have taken it before, and it feels deeply odd to see posts and activity from the doppelganger-Cirion. One particularly odd experience came after the AV Club redid their commenting system: I'd been Cirion on the old system, but a new Cirion took over on the new one. I'd never been particularly active before, but it still felt odd to read comments under "my" name that I disagreed with.

Anyways: it's a particularly rich and resonant theme in any Internet-related story, and more so when it starts to overlap with genres like detective fiction that are already interested in false identities and multiple suspects. The increasing importance of a distinctive name, coupled with the increasing difficulty in protecting it, seems especially important now.

Speaking of identities: the book is mostly focused on Trouble and Cerise, estranged lovers trying to make a living in a new world with harsh laws against hacking. It was a little hard at first to distinguish them: as you might imagine from her name, Trouble has a reputation as the more aggressive of the two, but the book opens with her acting out of extreme caution to avoid danger while Cerise presses forward with a risky venture. It took a while for me to really get their personalities, although it gets a lot easier once they meet up.

The secondary characters don't get as much attention, but are interesting and distinctive. I liked how so many of them already had a history with the leads; if not, they generally know each other by reputation. Having a vast cast makes things much more interesting for a whodunit like this: I'd assumed early on that newTrouble was someone they knew, and it was fun to speculate who it might be and review evidence.

The plot moves very quickly near the end, with some of the best-written cyberspace scenes I've read. They're very kinetic and engaging, and I loved the easy camaraderie of Trouble and Cerise.

I'm still a little unclear on the precise relationship between the Mayor and Silk. It doesn't seem like they were lovers. I'd wondered if Silk might be a relative, but there doesn't seem to be any evidence to support that. Perhaps the Mayor was grooming him to be a successor, or some sort of enforcer of Seahaven.

I also never really understood what their motivation was. At first I thought that they were intentionally trying to draw out Trouble, but that doesn't seem to have been the case: everything gets worse for the Mayor once that drama gets stirred up, and it would have been much better for him to live in a world without her than in a world where he can put her down; plus, they don't seem to have had any particular beef before. Was it just Silk being young and stupid? Possible, but odd... it seems like most hackers would prefer to make a name for themself, and he would have been young enough during Trouble's glory days that I doubt they had any meaningful interactions.

Regardless, the denouement was neat and believable. I'd anticipated one or both of them taking over Seahaven ever since Cerise realized how the Mayor controlled the space, and this sort of legal gray space is the perfect spot for them to land.

While identity issues are the core of the novel, the political and legal framework is a persistent and intriguing side-plot. Characters in the novel often talk about "the shadows" and "the bright lights" as diametrically opposed factions, but of course there's a broader continuum of legality. On one extreme, you have the mob, straight-up real-world criminal gangs. Then you have the black-hat hackers who commit crimes in cyberspace but would never think of causing harm in meatspace. There are hackers who used to do legal work, but new laws have redefined those same activities to now be illegal. There are private syscops who are primarily interested in the integrity of their own systems and don't care as much about national issues. There are those who might cut corners to uphold the law. And there are the straight-arrow government employees who insist on doing everything by the book. Much as with the subcultures, these relationships are dynamic, and individuals may find ways to create useful alliances on other points of the digital-crime spectrum.

Even the hackers in this book agree that there probably needs to be some sort of law, so the question becomes what is the good law, the appropriate law, that will protect against the really bad stuff happening without stifling the net. This book was published back in 1994, so it would have been shortly after the founding of the Electronic Frontier Foundation, after cases like the Secret Service raid on Steve Jackson Games, after it was clear that existing laws were insufficient, but before the passage of early attempts like the CDA and later efforts like the DMCA. In our own time, this has continued with more aggressive bills like SOPA and COPA. Anyways, it's a topic that was very much part of the zeitgeist, but of course is still an issue today, with issues like net neutrality continuing to drive the conversation of how the government should or should not be involved with the Internet.

So! Really good book - I realize I haven't talked much about the plot here, but it was fun, with great atmosphere and some lovably flawed characters. I'm not sure if Scott wrote other cyberpunk, but I'm definitely interested in checking out more of her work.
Posted by Christopher Charles Horatio Xavier King III, Esq. at 8:40 PM