She Sees Seed Shells by the Spaceport

I haven't written enough about Nicola Griffith on this blog. I've read and loved her Aud Torvingen  noir thrillers, but have never been able to articulate my thoughts about them. That might just be because I don't read that much detective fiction to begin with. That said, I do read a lot of speculative fiction, so books like Hild and Ammonite are on much more familiar ground for me. 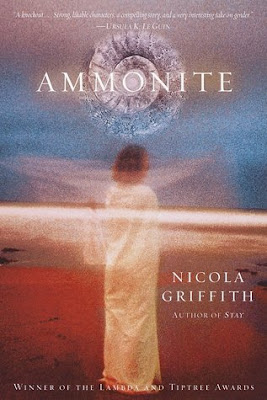 Ammonite is set far in the future; I pictured it as taking place at least several centuries and maybe a millennium from now. Earth has gone through multiple waves of colonizing other planets: settlers will arrive somewhere, put down roots, become self-sufficient, and acclimate to any local flora and fauna. Earth is now in a later phase, where the profit-minded Company (no, not that Company) seeks to exploit the resources of those planets. (Not necessarily in a strip-mine-the-surface way, but transforming a world into a luxury resort can be disconcerting in its own way.) Company is theoretically overseen by the SEC (no, not that SEC), but as in our present times, this relationship is subject to regulatory capture, and also complicated by the strong-willed individuals who make up each faction.

We catch some glimpses of all the above in the opening of the novel, but Ammonite takes place on Jeep. Jeep is an excellent near-Earth-like planet, with multiple moons, a distinct solar cycle, lush indigenous flora, thrilling electrical storms, and deadly thermal eruptions. It also harbors an exotic virus, dubbed Jeep as well, which slaughters 100% of the men and roughly 20% of the women it infects. Soon after landing, the original colony faced the brink of extinction. And yet, they somehow survived, and over many generations have developed a thriving exclusively-female society.

As in all of Griffith's novels, Ammonite features a fantastic and thoroughly unique protagonist. Marghe Taishan is an anthropologist (!) who arrives at Jeep with a dual mission: to act as the guinea pig for an experimental vaccination against the Jeep virus, and to study the culture of these people. Marghe is willful and bright, but not the stereotypical "Strong Female Protagonist" that just collects masculine attributes into a woman's body. Nor is she especially "sensitive" or "empathic" or "nurturing". She's a person, working hard, making mistakes, learning from those mistakes, pursuing her passions, finding new passions to chase.

There's an overarching plot concerned with the integration of new Earth arrivals into Jeep culture: the military Company agents have been infected by the virus, and Marghe's research will help determine whether they will be allowed to return home to Earth or will remain quarantined on Jeep and forced to adapt to native customs. Most of the book, though, is focused on Marghe's personal adventure: her journey into native lands, conversations with its people, witnessing its natural phenomena, enduring its hardships. This starts out as "research," with Marghe acting the part of the clinically distant outside observer, but as the novel progresses she becomes more and more deeply entwined with the culture, losing her objectivity but gaining infinitely more.

"Ammonite" challenges us to rethink what is "normal". We think that the way things are done on Earth are the only way they can be done, but, like a lot of great science fiction, Ammonite hits a reset button and asks us to imagine something different. One aspect that particularly struck me was "trata", which is sort-of-but-not-really the trade system of Jeep. On modern Earth we're accustomed to a market-based economy that uses currency to facilitate the flow of goods and services. But that isn't the only option: in our own past, there have been successful alternatives like the gift-based economy of the Pacific Northwest and Polynesia.

On Jeep, most settlements are more or less self-sufficient, but everyone can benefit from trade: accessing the crafts of another group, or recovering seeds after a botched harvest, or gaining a promise of protection against threats. Trata shares some characteristics with a gift economy, but it's a bit more dynamic. The bonds and obligations created by an exchange are seen as valuable in themselves, and to some extent can be securitized: if clan A has trata with clan B, and B with C, then A can ask B to intercede with C on their behalf.

There is no currency associated with trata, and it isn't intended to immediately cancel out like numismatic transactions do. Instead, the outstanding debt of the lesser party in a trade is itself seen as an asset, a sort of karmic balance that will encourage further trata in the future. Trata is facilitated by viajera, travelers who function as a combination of judge, bard, and scholar.

When I started reading Ammonite, I would sometimes think "Oh, so this is what the world would look like if women ran things!" As I got further along, though, I realized that that wasn't the point. The society on Jeep works just fine without any men, but I don't think it would be impossible with them, either. There's no mystical feminine energies moving things along: perhaps slightly more of a drive for nurturing and a bit less aggression, but there are still plenty of examples of the latter. For the most part, the gender makeup of Jeep just sort of fades into the background, and I completely forgot about it for long stretches of the book. I would suddenly remember it at random points: "Huh, all of the sailors on this ship are women. Oh. That's right! All of the people on this planet are women, so of course all the sailors are."

The central mystery of Ammonite is probably how the virus works and how the women can reproduce. I liked how this was presented: nobody is trying to hide the answer, and the natives have been explaining it to Company all along, but Marghe can only understand it after she becomes vulnerable and lets down her barriers. She needs to experience it, to become the observed as well as the observer.

This explanation, like several others in the book, is a nifty blend of science with a little quasi-mysticism. There's an acknowledgment of the underlying problem, a bit of a leap for a solution, and then a thorough description that helps it all feel grounded and plausible. It ultimately falls under the umbrella of "sufficiently advanced technology", except in this case it isn't machines or computers, but a deeper understanding of natural processes.

I'm rapidly approaching the end of available Griffith novels, but have thoroughly enjoyed each one so far. Ammonite in particular scratches a very particular itch. I hesitate to compare it to other books, but in some ways it reminds me of the fantastic Steerwoman series and Hellspark: it's another fantastic novel that's adventurous, focused on discovery and growth and negotiations, a refreshing alternative to the combat-focused plots that dominate so much speculative fiction.
Posted by Christopher Charles Horatio Xavier King III, Esq. at 7:41 PM