This probably isn't actually a thing, but I've started thinking of the subgenre of science fiction that I've been focusing on lately as "humanist sci-fi". These novels focus on creativity, collaboration, and problem-solving. They eschew violence, definitely as a solution and often even as a part of the setting. Like sci-fi as a whole the science can be hard or soft, the protagonists may be heroes or antiheroes, and and they may or may not include alien species, but they seem allied by a common thread of dignity and curiosity that I find increasingly appealing. 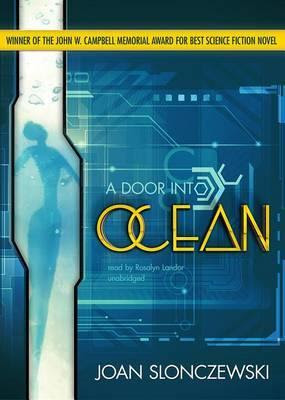 My latest author and book in this vein is A Door Into Ocean by Joan Slonczewski. The story started off a little slowly, but there's fantastic world-building and great exploration of really cool ideas. Once the main conflict kicks in, it becomes very engaging, and I tore through the back half of the book with a quickness.

There are a lot of neat things going on here. One of the most obvious is Sharer culture, which is built around reciprocity and cooperation. In an appealing variation on Orwell's language theory, Sharer society is fundamentally egalitarian, and their language makes it difficult for them to even understand concepts like domination or unilateral action. In the Sharer tongue, verbs bidirectionally link subjects with objects. If your hand strikes a wall, the wall strikes your hand. If you shun someone, then that person shuns you. If you teach someone, you learn from them.

This leads to a very appealing culture, based around sharing and mutual respect. It isn't a monolithic one: Sharers can and do disagree with one another, and they develop very different personalities, defined in part by the "selfnames" they claim: The Intemperate One, The Stubborn, The Traitor. They generally strive for consensus, but do not compel it. They place a high value on learning, seeking to correct misunderstandings and spread knowledge amongst one another.

The more immediately obvious defining feature of Sharers, though, might be that they're all women. I don't remember if the novel ever addresses whether they evolved this way or if the males died out, but they've developed the ability to reproduce by directly shaping embryos in the womb. (As a side note, they also have an interesting belief in reincarnation: the councils will decide when to create more children, and they believe that the souls of dead Sharers will inhabit those new bodies, thus keeping the overall Sharer population fairly consistent and maintaining a limited demand on Shora's resources.) Of course, this reminded me of Ammonite, although it's cool to see how differently those societies turn out. Jeep tended towards pacifism, while Shora is wholly pacifist; Jeep is mostly driven by a gift economy with limited bartering, while Shora doesn't really have an economy but has adopted barter for trade with other worlds; Jeep is a heterogeneus civilization with various competing tribes while Shora is more homogenous. And there are similarities: both planets, despite being considered "primitive", have highly advanced life science;  both are largely monogamous; both have some sort of meditative trance that can have a transformative effect on those who undergo it.

Some of this probably has to due with the authors' different interests. Joan is a professor of biology, and, while biology isn't the main point of this novel, it's a very cool and important element. Some of this drives the plot, as when Valedonians are baffled by Shora's flora and the Sharers' relation to it. There are occasional semi-deep-dives as well, when Sharers detail how a particular organism works, or the important role a seeming pest has to play in the larger ecosystem they rely upon. As with some of my favorite science fiction, A Door Into Ocean shows an alternate route to reach a familiar place: they have a planetary communication system, recorded knowledge of all their science and history, lifesaving treatments for seemingly fatal injuries. And yet, these are all developed from organic, living sources. Or... "developed" is probably not the right word. Sharers have integrated themselves into Shora, and learned how to thrive within it, rather than bending it to their will.

We learn a lot of the basics about Shora and Sharers through the eyes of Spinel, a young Valedonian male who is apprenticed on the planet. Honestly, I found Spinel a little hard to take, which may have been deliberate. It was difficult for me to place him: at first I imagined him being about eight to ten years old, as he's constantly throwing temper tantrums and storming off in a huff. But then there's the sex stuff later on, which made me think he was a particularly immature young adult. And then near the end Merwen reflects on how much taller he's grown, so I'm left kind of imagining him as an early-to-mid teen. Anyways. I never liked him all that much, but he becomes much more tolerable as the book continues, especially after he returns to Valedon and starts bearing witness.

The really cool thing about Spinel is his stone-knowledge. For most of the novel, it's been kind of inescapable that Sharers are "good" and Valedonians are "bad": that's an oversimplification, but the Sharer way of life seems far superior. But I really appreciated that Slonczewski doesn't make the Sharers perfect, and one of the great examples of this is their fearful, almost hateful relationship with stone. Very late in the novel, we start to see how this is based on ignorance, not entirely unlike the ignorance-based hatred that many outsiders bear towards Sharers. Once Spinel begins learn-sharing with them, they can begin to see that stone is nothing to fear: diamonds are carbon, and carbon is the basis of life. Stone can "grow", it's just done under different conditions, like high pressure and heat. As they begin to understand it, their fear starts to drop away, and you can imagine their stone-sickness dropping in potency.

Besides Spinel, the other Valedonian we hear a lot from is Realgar, especially in the last third or so of the novel. He... seems a little like the husband in a Lifetime Movie Of The Week. He's very awful and easy to cheer against. While it was discomforting, I did kind of appreciate that we got to see his point of view, so we could see his rationalizations and motivations. Spinel's ignorance is a useful device to explain Sharers, but Realgar's hostility is arguably even more useful, as it provides a sharp contrast and draws out the way Sharers will behave even under distress.

Realgar's occupation and campaign of domination start exploring major themes of nonviolent resistance and anticolonialism. The asymmetry of the struggle is highlighted, not only in means (Sharers have no weapons) but also in aims (Valedon seeks to conquer and profit, Shora seeks to embrace and learn). The price Shora plays is real and huge, particularly near the end as waves upon waves of peaceful martyrs are brutally slaughtered. The Sharers' response seems to be successful, but not at all easy or simple, requiring a huge amount of dedication and sacrifice. It's fragile, too: a single act of violence immediately undoes all the good work done before and comes close to dooming their entire species.

Reading this book, I was curious how readers in the mid-80s would have read this scenario and applied it. My immediate thought was of colonialism, especially in Indochina: the asymmetry of goals and mutual incomprehension reminded me a lot of the Vietnam war. But it might be more accurate to think of the civil rights movement in the United States or Gandhi's movement for Indian independence, particularly in terms of the methods used for resistance and revolution.

Now, in the 2010s, I find myself thinking of global adventurism, capitalism, and terrorism. How should wealthy and powerful nations behave in their relations with poorer and weaker ones? How will those other nations respond? Asymmetry is inevitable, and while I passionately wish that all parties would follow principles of peace and understanding, it isn't at all surprising that many will choose to follow the example of Nisi rather than Usha.

I suspect that some readers were annoyed by the ending, but I loved it: the last-minute conversations, reversal of plans, and open-ended personal relation between Spinel and Lystra. That felt very real to me, and also like an echo of the culture we've spent a novel exploring. Sharers aren't defined by their dogma: they're curious, taking in new information, adapting, finding the best decisions based on their values and present circumstances. They tend to operate by consensus but, well, Lystra has always been headstrong and independent, and it's very much in keeping with her to act. At a macro level I'm left with the feeling that things will be okay, and I like the bit of messiness that's left for the individuals we've grown attached to.

It looks like this is the first book in a series, and I imagine I'll pick up the remainder at some point. This novel covers some really cool, fertile ground, and scratches the itch I'm increasingly feeling for warm, thoughtful, progressive science fiction.
Posted by Christopher Charles Horatio Xavier King III, Esq. at 8:33 PM