I'm not sure exactly how I got into this habit, but for the last couple of years I've read a Nicola Griffith novel each time I fly to and from Chicago. Other than the Aud Torvingen series, I'm not reading them in any particular order, and so am finishing with her second published novel, Slow River. It's good! 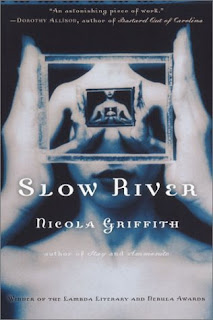 It's less obviously sci-fi than Ammonite, but there might be even more science in this book. Specifically, there's a really cool and deep look into environmental science, microorganisms, public works and infrastructure. I don't know enough about life sciences to know if all of this is established science or if some of it is speculative, but it all sounds plausible and intriguing.

I increasingly enjoy reading about people who are good at what they do and take pride in their work, and Lore is a great example. She knows a great deal about the underlying theory and the practical operations of the treatment plant she works at, and feels compelled to help it perform well. There are multiple tensions opposing this drive of hers. First, she's keenly aware of the source: her knowledge and her determination come from her family, from which she is estranged, and even when she benefits from that association she's simultaneously brought down by the reminder of her past. She's also constrained by her secret identity: she can't seem to be too good, or know too much, lest she ruin her disguise and expose herself to dire consequences.

But she overcomes these hesitations and does what needs to be done. I really liked how the public good and a general sense of responsibility are powerful incentives in this novel. Lore doesn't say "It's not my job" or "What's in it for me?" She knows the consequences of getting things wrong, the mild-to-major harm that will be visited upon untold numbers of people should these systems fail, and that drives her to sacrifice her self-interest and support the greater good.

Of course, Lore hasn't always been so altruistic. She hasn't been exactly selfish, but she has been focused on herself. Among other ways, this is shown through her sex scenes: there are a surprising number of encounters she has throughout the novel, starting from a very young age and continuing through a series of disconcerting liaisons while working with Spanner. I thought it was interesting that, of all of Lore's short-term and long-term romantic partners, Magyar is the only one who doesn't get a sex scene. There is still a nice focus on physicality in their relationship: when they tap each other while wearing biohazard suits, it feels more erotic than the graphic parties that occurred a few pages before. The bond Lore forms with Magyar is powerful, built on respect and trust long before they thought of one another as partners, and it's kind of cool to see that Lore decides she will spend the rest of her life with Magyar before sleeping with her.

The Magyar relationship is kind of the opposite of the one Lore has with her mother, which began with love, then moved to trust, and devolved into suspicion and adversity. While Griffith's novels are all very different, I've noticed that the mother characters share a lot of similarities. They tend to be powerful, manipulative, emotionally distant, and clever. Their protagonist daughters inherit their wealth and education, and share some of the high-society connections while being estranged. I don't want to overstate this - Aud's mother is much more sympathetic than Lore's - it's just an interesting theme.

The revelation of Katerine and Oster was seeded very well and cleverly revealed, with all the important information present long before Lore receives the answer. I'd had a suspicion that something else was going on - Oster's behavior didn't really fit the scenario - but for some reason Katerine hadn't been on my radar for that incident, and I was impressed by the conclusion. The Greta revelation didn't make as much sense to me. All the pieces to that puzzle had also been set out in advance, but it wasn't and isn't obvious to me how they fit together, how Lore goes from the old black-ops team to Greta's role in it to blackmail to the kidnapping. It's possible I just missed something in the sequence, though... I was wrapping up the novel near the end of a very long delayed flight.

I'm still undecided on how I feel about the structure of the novel. Within each chapter, it shifts between present-tense and past-tense narration, and between first-person and third-person narrators. These are used to denote different time periods: one starting from Lore's childhood, one starting immediately after her escape from the kidnappers, and one when she starts her job at the plant. It always felt jarring to me, and I'm not convinced that the novel is much better from having the timelines overlap this way than it would be told chronologically. We already know the outcomes of the first two timelines, so it doesn't really build any suspense. It definitely isn't bad, it just seemed distracting to me.

All in all, Slow River was a great read. Lore is yet another terrific Griffith protagonist: resourceful, thoughtful, resolute, driven by a winning mix of compassion and self-determination.  While it's technically another science fiction novel, I think it stands on its own, with a very different setting and feel from Ammonite. In some ways it anticipated the crime noir of Aud Torvingen, but with a very different protagonist and a unique set of concerns.

Ordinarily, I would feel bummed to have exhausted the output of a newfound author, but! Fortunately, Nicola is just about to release So Lucky, which will be out in less than a month, yay! That should help tide me over until the sequel to Hild arrives.
Posted by Christopher Charles Horatio Xavier King III, Esq. at 8:17 PM