I'm continuing to make my way through Roberto Bolaño's body of work. I'm starting to regret not plowing through all of them at once. Typically, I want to hold off and savor the authors who I enjoy most, but Bolaño's stories tend to have little linkages that bind them together. Not as directly as, say, David Mitchell's, but caesuras in one novel might be filled in another. As I was reading Nazi Literature in the Americas, I often had the feeling that I was reading a reference to a character who I had previously encountered, but had no idea whether it was from the vast cast of The Savage Detectives, the oppressed seekers in 2666, earlier in the same book, or if I was just imagining it. 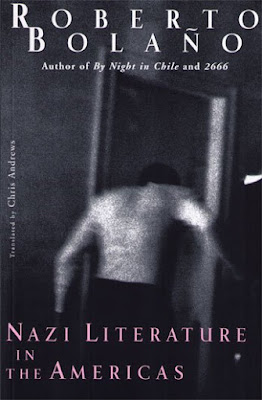 All of his books that I've read so far have a few things in common. They're partially or wholly set in a literary milieu, populated by poets and novelists and publishers and critics. They disdain traditional narratives, largely omitting dialogue and using different forms to present their story. Nazi Literature is sort of an extreme example of both of those elements. Per the title, the whole book is about (fictional) writers of far-right-wing literature. Structurally, it's organized as a sequence of capsule biographies. Each writer gets a birth and death date and city, then several pages summarizing their life's accomplishments: who they influenced or were influenced by, what works were rejected or published, critical consensus around their output. We never really see people interacting or get much of a sense of individual personalities. The end result feels much more like a mosaic, impressive but very static.

It's really well-written, though! While the subject matter can be horrifying, there's a strong sardonic streak running throughout. I particularly enjoyed a few segments that, while ostensibly describing a fictional piece of literature, seemed to be anticipating potential criticism of the book itself.

"It is full of appendices, maps, incomprehensible indices of proper names, and solicits an interaction in which no sensible reader would persist... There is no main character. The less chaotic stretches read like collections of stories haphazardly tacked together... The texts are not so much scrambled puzzles as fragments of scrambled puzzles. Although presented and sold as a novel, The Fourth Reich in Denver is in fact a reader's guide to the preceding titles."

"It is not unusual for Sibelius to spend twenty pages simply introducing a character, specifying his physical and moral traits, his tastes in food and sports, his ambitions and frustrations, after which the character vanishes, never to be mentioned again in the course of the novel; while others, who are barely given names, reappear over and over, in widely separated locations, engaged in dissimilar if not incompatible or mutually exclusive activities. The workings of the bureaucratic machinery are described implacably."

Stylistically, the novel reminded me of "The Part About the Crimes" from 2666. There's a sort of similar piling-on effect: each individual entry is dry and colorless, but they are relentless, stacking one on top of another into a more horrific edifice. It gets to be a little numbing, but the numbing is deliberate, drawing attention to how the terror is becoming the new normal.

Despite the title, only a few characters in this novel are technically Nazis, but pretty much everyone is somewhere on the far-right spectrum. Given the predominantly Latin-American setting, it's fitting that Falangism is particularly represented. Most of the writers are not affiliated with any particular movement, but hold antisemitic views, support authoritarianism, and/or hold other rightist views. In the whole book there are perhaps one or two very brief biographies that aren't obviously political. I'm curious if a deeper reading would reveal their connection, or if this is deliberate, depicting them as so minor that it isn't worth exploring their beliefs.

Most of the subjects are presented matter-of-factly, without any obvious editorializing. The characters themselves are... oddly ordinary, I guess. There are a few monsters, but the majority of them come across as vaguely pathetic, misguided, or confused. This is probably realistic, and also seems like it may be an effective way of handling them. It's a little satirical, denying them the glory and infamy they crave, instead showing their smallness and limited impact.

The one major exception is the last full chapter, Ramírez Hoffman aka Emilio Stevens. This is one of the sections that felt like it may overlap with another Bolaño book; in particular, the characters of María and Magdalena Venegas seemed familiar. Anyways, this chapter is different from the rest: it's the most vivid, the most horrifying, and has an active, present first-person narrator (named Bolaño). This chapter finally starts to get at raising some crucial questions, although it doesn't begin to answer them: are violent people attracted to fascism, or does fascist ideology produce violence? Does art born out of wickedness have value?

Even though this section feels different from the preceding ones, I think it benefits from coming at the tail end. It's a bright, bold splash of color that brings home the real-world consequences of ideology. We've seen how widespread this umbrella of ideas is, and this final entry is kind of a case study of how deep it can go.

Speaking of the real world... as far as I can tell, the characters in this book are all fictional, or at the least fictionalized versions of real-world people. But it's also very grounded, with plentiful references to real-world political leaders and movements. One striking exception is Pinochet, who seems conspicuously absent from the entire book until making a very late appearance deep in an appendix. I'm a little curious why he doesn't have a larger presence, when people like Peron, Allende and Castro get name-checked more frequently. Bolaño was Chilean, so maybe it seemed too close to home. Maybe he wanted to keep the focus more on pan-American extremism instead of seeming like he was settling scores. Or maybe the absence is itself significant: one of Bolaño's skills is to build a kind of mounting dread by talking around and eliding a central subject, and perhaps Pinochet plays that role here.

I'm still unsure exactly what the book is supposed to be. Some sort of near-future reader's-guide to a completed movement in American history? The timelines in the novel go through at least 2027, and every character has a death date listed, so it's presumably written some time after that. That sort of chronological distance may help explain the chilly and dispassionate treatment of the subject, not unlike how we now write about, say, Galileo's trial. We recognize it as being outrageous and wrong, but it's also settled. We feel only scorn for the antagonists, not anger.

Obviously, a book with the title "Nazi Literature in the Americas" isn't going to be a cheerful book, but this ended up being a surprisingly good read. It's a very muted satire, dealing with bad ideas in a deliberate way, revealing them as mean and contemptible, while simultaneously poking fun at the literary system and the whole edifice that produces books such as this.

This is probably the most formally constrained book of Bolaño's that I've read yet. I was reminded often of Borges's work, especially Pierre Menard... Bolaño is definitely not a magical realist and his books have a very different feel to them than the surreal Borges, but I think both of them were great explorers of the untapped potential of non-narrative forms of writing. On a more prosaic level, this kind of reminded me of the short stories I used to write when I was a kid, which were just a sequence of "This person did that and then went there and met them." I was writing out of a paucity of ability and imagination, but Bolaño chooses this mode deliberately, claiming a distant point of perspective from which he can review and dismiss his subjects.
Posted by Christopher Charles Horatio Xavier King III, Esq. at 10:10 AM