I enjoy writing up these reviews, or posts, or whatever I should call it when I write some stream-of-consciousness text about a book I just finished. I have a hard time with short stories, though. I enjoy reading these collections, but generally walk away just thinking "Those were good!" and/or "Each story was different from the other!", without much else to say that would motivate me to write something up. That's kind of how I feel about Men Without Women, the most recent tome from Haruki Murakami that I've read. But since I frequently claim him as one of my favorite authors, I feel like I should put something up here for completeness sake. 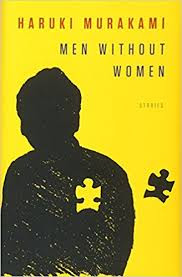 This is definitely one of the more accurate titles I've seen to a short story collection. The final story is called "Men Without Women," but every single story in here features a male protagonist who is losing, has lost, and/or is mourning a particular woman. As is so common in Murakami, the men are almost always passive, and it is the woman who initiates the act of loss, generally by dying or sleeping with another man. Apart from that, they're fairly varied. Some are more reflective, others more focused; some are narrated directly, others by distant characters recounting their own stories.

Reading them all back to back like this does make it kind of hard to ignore some of Murakami's ticks. A lot of those are pleasant eccentricities that I've come to love: his fondness for cats, for disappearances, for moons, for ears. But it also emphasizes his history of presenting women as inhuman characters. They're not bad: he loves and admires women, granting them talents and powers beyond the reach of his apathetic male heroes. But he introduces them and treats them like creatures, strange animals or divine messengers, who may understand the souls of mankind but are unknowable in return. There's an odd and, frankly, unsettling way his male characters think about women, more as a scientific problem to be solved or a source of inspiration than as another soul, a sentient human with whom to commune.

What's especially odd about this is that I feel like Murakami has gotten a lot better on this front lately. In particular, Aomame from 1Q84 is one of my all-time favorite Murakami characters and seemed to completely break the mold from his earlier work, as an awesome point-of-view character with a rich interior life, her own ambitions and shortcomings. The women here feel like a massive step back, to the point where I wondered if this was a belated release of earlier work of his. Judging from the copyright page, it isn't, and all these stories came out in the last several years.

So, anyways. That kind of kept me from being able to fully enjoy most of these stories, which probably says more about me than about the book; I doubt it would have bothered me much when I first started getting into Murakami over a decade ago. There is one story here that I absolutely loved, called Kino. It really does seem like a greatest hits of Murakami-isms, down to the jazz records and unexplained snakes and relentless door-knocking (which simultaneously evokes and inverts a similar scene in 1Q84). It has the same, uh, (frantically tries to think of a synonym for "regressive") simplistic relational perspective that bugged me in the other stories, but in general it is so good and pushes so many of my buttons that I can embrace it.

Conceptually, Samsa In Love is especially fun, thanks to its delicious conceit: a cockroach wakes from troubled dreams to discover that it has been transformed into Gregor Samsa. I quite enjoyed this one, which is tarnished slightly by, you guessed it, treating its lone female character as just a foil for its hapless male protagonist, but the concept is strong enough to keep it worthwhile for me.

I guess that reading this has reminded me of something that I knew before: Murakami's short stories are probably my least favorite forms of his writing. They can still be really good, but, with a few memorable exceptions like The Little Green Monster, Super-Frog Saves Tokyo and The Rise And Fall Of Sharpie Cakes, they don't strike me nearly as strongly as his novels and longer-form nonfiction. Even by those standards, Men Without Women is probably towards the bottom of the list for me. Worth reading, but probably more for completionists than for curious newcomers.
Posted by Christopher Charles Horatio Xavier King III, Esq. at 11:53 AM