Hello! I've returned from a wonderful two-week vacation. It was filled with nature, and books, and at least one book prominently featuring nature: The Monkey Wrench Gang, a sort of destructive caper novel by the environmentalist and provocateur Edward Abbey. 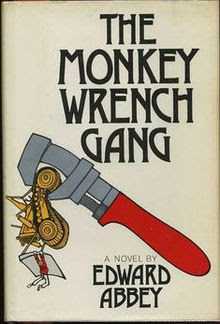 Abbey has been on my reading list for a little while now. I think he first came to my attention when Nick Offerman name-dropped him during an interview, and the little I'd read about him sounded fascinating. He was an anarchist and naturalist who wrote lyrically about the American West, lamented the destruction being wrought there, took direct action to prevent it and urged others to do the same. The capsule biography made him sound a bit like a combination of John Muir and Abbie Hoffman, further piquing my interest. I'd initially flagged Desert Solitaire, but on further research decided to start with The Monkey Wrench Gang, which fans seem to agree is his most accessible and enjoyable work.

And enjoyable it is! There's a lot of content in there, but even just as a story in its own right it's a lot of fun. It follows a very recognizable formula: a band of misfits joins together in order to accomplish a common goal. But instead of that goal being the defense of a town or the discovery of a treasure or the solving of a mystery, the goal here is pure destruction: blowing up bridges, wrecking bulldozers, cutting down fences, stripping away all markers of mankind's intrusion upon the stark desert landscape.

It's fun to get to know the gang; it felt a little like putting together a party for an RPG, with each member playing their own specific role. Doc Sarvis, a middle-aged surgeon and widower, bankrolls the operation while generally sounding the voice of reason. Bonnie Abbzug, a Jewish nurse from Brooklyn, handles odd jobs and keeps up morale. Joseph "Seldom Seen" Smith is a wilderness guide and local expert, with a perfect memory for the complex geography of western Colorado and eastern Utah. And George Hayduke, a veteran of the Vietnam War, is an expert in all matters of munitions and explosives, and the loudest voice for causing destruction.

The four characters are distinctly drawn, though they serve very different roles in the narrative. After a memorable introduction, Doc fades into the background for much of the story. Seldom Seen and George are the stars of the novel, central to almost all of the action. And Bonnie is... Bonnie can be a frustrating character. She often feels like a sexual token, a resource for the men to pass around among themselves. She does get some great lines, and speaks up on her own behalf, but ends up serving the role the men select for her. I can't decide if it's better or worse that she articulates a feminist message while performing a chauvinist part.

This novel was written in the mid-seventies, and it's kind of interesting to see how Abbey sees women's liberation and the sexual revolution. As portrayed in this book, it's entirely about men's pleasure: at last, they can enjoy multiple sexual partners without any consequences or demands for intimacy. There's really no reference to womens' pleasure or autonomy. This is especially noticeable in Bonnie's initial introduction, and practically parodies the "men writing women" genre: how many stories are there where older, unattractive men, without extending any effort, pique the boundless lust of voluptuous, spunky and creative young women? Isn't it a weird coincidence that those stories are invariably written by older men?

Sorry, that was a bit of a tangent... but it also gets at one of the unavoidable elements of this book: the inherent selfishness of all the characters. They aren't purely selfish, but their selfishness coexists with their noble idealism. Yes, they love the unspoiled beauty of the West and wish to maintain it. But they live in the West. They don't ever suggest that they should leave, just that newcomers should. They benefit from the fruits of industrial life: Doc charters private planes, Seldom and Bonnie drive automobiles, George gleefully purchases products from DuPont. But they don't think that other people should use electricity from these plants, drive cars on those roads, buy those houses.

That contradiction is unavoidable, and has an august precedent: we tend to think of Walden as being a celebration of a pure commune with nature, but Thoreau didn't hesitate to purchase nails and tools and other modern conveniences that would support his project of living in nature. People like Seldom Seen seem to be following in those footsteps, consciously using certain resources to achieve a somewhat contradictory aim. On the other hand, George is openly anti-environmental: he takes pleasure in littering wherever he goes. He doesn't really care about defending nature, he just wants to destroy civilization. The other members of the gang call him out on this, but agree to live and let live. It's kind of cool to see how each person has their own motives and behavior, yet they succeed in accomplishing (= destroying) a whole lot. I wonder if this might be kind of an exemplar of political anarchism: there's no external authority they defer to, all issues are deliberated by the group and decisions are only made once consensus is reached by all. They each take different journeys to arrive at those conclusions, and all support one another once they arrive there.

The two paragraphs above probably sound self-righteous, but the truth is that the exact same criticism applies to my own life: I profess to love nature, and yet my actions belie that love. My work life is focused on technology, and happens to have a very low environmental footprint; on the other hand, I pollute the most when I visit nature. I show that love by hiking, and how do I hike? By driving, by myself, in a gasoline-powered automobile to a trailhead. In extreme cases, like the vacation I just returned from, I might even fly on a commercial airliner, spewing large quantities of greenhouse gasses into the upper atmosphere, so I can appreciate the beautiful landscape I'm helping to destroy.

Like the characters in this book, I think it's valuable for me to acknowledge the contradiction or hypocrisy, the way my actions fall short of the ideals I profess. But even if it is contradictory, nature is still important, is still worth preserving, and we can still benefit enormously as human beings when we immerse ourselves in it.

Returning to the politics of the book: despite its boundary-pushing eco-advocacy, it manages to feel really regressive on other fronts, especially on gender and race. There's a really negative view of Native Americans throughout the book. This might be an aspect of the characters and not the author: when George, for example, espouses an opinion, that probably means it's a bad one. But there are zero positive portrayals of or references to native people throughout the book: despite the fact that this is their land, they only appear as drunken, lazy, greedy, useless background actors. The narrator seems to agree with the protagonists' low opinions.

I find it increasingly difficult these days to separate my enjoyment of fiction from the politics it presents. While the action in the novel is thrilling, the characters' goals end up being opposite to, or maybe just orthogonal to, the stuff that concerns me the most today: improving access and opportunities for the most people. If the Monkey Wrench Gang was focused on saving the West for the sake of the planet, then I could get behind that. But saving it so a few hundred Mormons can keep vast landscapes all for themselves... ehh, that's less inspiring. I admire their tenacity and creativity and audacity, but can't help wish they cared as much about other people as they do about the planet they live on.

All in all, The Monkey Wrench Gang ends up being a surprisingly detailed action plan that anyone can read to become an eco-warrior. Delay roads by pulling up survey stakes! Sabotage earthmoving equipment by pouring corn syrup into gas tanks! I can see why Abbey is so admired by so many people: he seems to have been the ultimate combination of thinker and doer, one who acted and one who exhorted others to act. I feel ambivalent about the actions he describes and the motivations he ascribes, but I can't deny how compelling he makes it seem.
Posted by Christopher Charles Horatio Xavier King III, Esq. at 3:24 PM