Continuing the trend of "authors I've been meaning to read for a while": Italo Calvino. He's popular amongst the Failbetter Games fans, and often shows up in lists of recommended reading, alongside existing favorites of mine like Borges and Mieville. The book of his that shows up most often on those lists is Invisible Cities, which was freshly on my mind thanks to The City & the City and the corresponding memory of Infinite City. 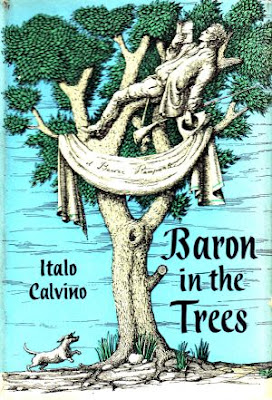 I forget now why I didn't start with Invisible Cities; instead, I picked up The Baron in the Trees, an earlier work by him. This may have been because I wanted to start with a more traditional narrative as opposed to the apparently fragmented structure of Invisible Cities. Regardless, it was a pleasant read: perhaps on the slight side, but very enjoyable.

The novel is set in the late 1700s, as the vestiges of Italian feudalism are starting to fade in the Enlightenment. The protagonist is Cosimo, the son and heir of a minor, politically ambitious baron. At the age of twelve, the son gets into a spat with his family, stomps away from home, climbs up a tree, and swears he will never come down. His determination proves powerful, and he lives the rest of his life in the branches of the forest: originally out of stubbornness, but eventually he seems to gain pride in his niche and to love what he can accomplish up there.

From early on, the story felt curiously nostalgic to me. I hadn't thought of it in years, but reading this I vividly remembered how, when I was a boy, I would be similarly determined to, say, spend 24 hours living in my backyard without coming inside, or to spend all day in a treehouse, or otherwise arbitrarily-but-emphatically shun the expected trappings of civilization for a (relatively) milder milieu. And I also vividly recall feeling a little boy's anger and sense of justice, issuing a proclamation that I would then seek to uphold long after the inciting incident had faded away.

I can only imagine how exasperating those demonstrations were for my, or any, parents. Similarly, when Cosimo makes clear that he never intends to return to the ground, the people in his life are alternately scornful, worried, disbelieving, dismissive, or condescending. Over time, they, and we as readers, may come to a sort of admiration: at first grudging, and then heartfelt. It's a stupid project and a stupid promise, but we can admire the tenacity and effort involved, regardless of how we feel about its aims.

Much of the fun of the book comes from Cosimo's inventiveness, as he brings the earthbound conveniences of his life into the trees or creates new advantages from his new environment. This reminded me strongly of the Swiss Family Robinson and other books that I had also enjoyed deeply as a child and haven't thought of in years. We learn how he fashioned a shower in an oak, how he brings a horse into the canopy, how he fetches items for his ailing mother's bedside or courts a young lady.

We end up witnessing the entire span of Cosimo's life, from childhood to old age, and those courting scenes are surprisingly touching. I really like the complexity Calvino brings to them: it isn't a simple, single love story, but a series of echoes and variations, as he grows and explores and tries. It's messy, which I like a lot: sadness and disappointment are inextricably bound up with passion and optimism.

The novel is narrated throughout by Biagio, Cosimo's younger brother, and in this and other aspects of the new Baron's life we get an appealingly uncertain account of the truth. The baron is a local legend, so of course all sorts of stories spring up around him, some more believable than others. Cosimo further complicates this with his own storytelling, often telling a dozen or more variations about a single battle, say, or an escapade. Biogio will offer up his own best guess about what actually happened, but his inability to pin down Cosimo helps the latter seem even larger than life.

I got the most pleasure from the book's adventuring, whimsical spirit, but it does touch up against some interesting political and philosophical topics. Calvino was writing in the mid-20th century, but these characters fully inhabit the 18th, and it's intriguing to see, say, the conflict between the Jesuits and Voltaire, or between French republicanism and Italian feudalism. Given the decades-long span of the book, it's especially interesting to see how things turn and decay: the initial fervor and promise of the French Revolution curdles and the new boss proves to be even worse than the old boss. But, to me, it doesn't ultimately feel misanthropic: it's more of a recognition that life is complex and unpredictable, and while we can exert enormous influence over how we live our personal lives, even the most powerful people have only the slightest control over how the world evolves.

This wasn't a mind-blowing book like I half-expected, but it was a really fun read: unexpectedly nostalgic, with a pleasant mix of action and thought, and a concept that initially seems thin but proves sturdy enough to support an entire life. I think I'll be ready to move on to Invisible Cities next, and am curious how that will compare with this.
Posted by Christopher Charles Horatio Xavier King III, Esq. at 9:17 PM