I started a couple of other novels on my vacation, but the last one I finished was So Lucky, a surprising new novel from Nicola Griffith that just recently came out. I've caught up with all of her extant works, and it was fun to dive right into a fresh work from her without an extended wait. 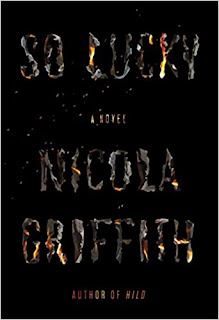 It's a little hard to place the genre of this book. Griffith is a very adaptable writer, skilled at writing detective noir and science fiction and historical fiction and whatever else she wants. So Lucky is internally more varied than any of her other works. A sort-of mystery spins up near the end, but it isn't structured like a mystery. There's a slight, possibly supernatural element, but it's ambiguous and not really central to the plot. There are some compelling relationship vignettes, but this is probably the least romantic of any of Griffith's books. I can imagine any one of these elements filling a separate novel, but this story works really well with the combination.

The book isn't mostly focused on the plot: it's focused on the very flawed but wholly sympathetic protagonist, Mara. She isn't some angel: she's a real, grounded, ambitious woman who is swiftly adapting to the titanic changes in her life. This can include reversing her previous actions (or lack of action): when she was fully abled, she casually blocked the creation of a wheelchair access ramp at work, focusing on the dollars saved rather than the people served. Now that she's on the other side of the fence, she's even more determined to see it built.

That might seem a little selfish, but once Mara is awakened to the daily injustices of her new world, she develops a very broad vision that includes a range of disabilities: not only people with limited motor function but also those who are deaf or otherwise face social and environmental obstacles that limit their ability to live their daily lives with dignity.

Mara comes across as an angry person, and I like that! She, and the book, feel very vital: someone who deliberately acts to change the world, not just reacting to her circumstances.

This was a short read, but a great one. It feels more personal than Nicola's other books... she's always had a great worldview, but this work seems more polemic than most, in addition to being a compelling character portrait. It was thrilling to see a little tie-in with one of her other franchises, and makes me curious if we'll ever see these characters interacting in the future.
Posted by Christopher Charles Horatio Xavier King III, Esq. at 6:02 PM