How You Vote Is The Main Thing

Remember, remember, the sixth of November! Let's see what the ballot holds for us in Northern California, shall we?

Governor: Holding my nose and voting for Gavin Newsom. My visceral dislike of the man is tempered by my agreement with virtually all of his positions. He has some very big shoes to fill. Jerry Brown is the best Governor I've ever lived under, by a very wide margin, and if Newsom can uphold Brown's legacy I'll consider us extraordinarily fortunate.

Lieutenant Governor: I am an adult who has written books and it still takes me two tries to spell "Lieutenant" correctly. Anyways: Ed Hernandez.

Insurance Commissioner: Ricardo Lara. (I'd actually be fine with Poizner getting this, he's a solid choice. But Lara would jumpstart the single-payer campaign in a big way, which is worth pursuing.)

State Board of Equalization: Malia Cohen

US Senator: After much consideration, I'm reversing my primary vote and going with Dianne Feinstein in the general. Since her troubling behavior early in the Trump era, she has really come around, and now has been a consistent and powerful voice against his administration's policies. The cynic in me says that this is just because it's an election year and she saw the need to placate her base; on the other hand, though, I want to reward good behavior, and I do genuinely appreciate her recent actions. On a grand-strategy level, this will almost certainly be the last time she runs for office, and the field to replace her will be just as strong in six years. If she happens to retire early, it will remain a safe Democratic seat.

Millbrae City Council: Reuben Holober and Anne Olivia. They've delivered on the smart-growth policies that first attracted me to this city, and I hope our council will serve as an example to our sister cities on the Peninsula in encouraging more housing and infill development.

Prop 6 (Repeal gas tax increase): NO. (I'll readily grant that gas taxes are regressive, but California's tax system overall is highly progressive, and there's room for this kind of tax. Increasing the cost of driving is a feature, not a bug, and taxes on fossil fuels are among the best ways to spur large employers and investors to develop and commoditize alternative fuels.)

Prop 7 (End Daylight Savings Time Phase 1): Yes. (I don't care all that much about DST one way or another, but I love this trend: it just undoes a voter mandate and returns the power to the legislature, which should have it in the first place. It's so dumb that we need to vote on, like, rain water barrels every year just because our forebears thought it was super-important to get their pet issues enshrined in the state Constitution.)

Prop 11 (Private ambulance workers must remain on duty): No

Measure II (Rebuild community center): Yes. (Fun fact: this is the letter "i" twice, and not a Roman numeral 2.)

Board of Education: Susan Alvaro

I've probably spent more time mulling over Prop 10 than all the other items on the ballot combined. California has an affordable housing crisis. People who are lucky enough to have rent control today are safe from the crisis, but remain anchored to their apartments forever. More people will be able to claim that safety in the future if this proposition passes, but at the cost of decreasing future housing construction and raising average rental prices across the board. It will be a godsend to established residents, and a cudgel to newcomers. It will make a small but significant decrease in inequality between wealthy landlords and their tenants. And it's worth remembering that approving this proposition doesn't enact rent control; it just gives cities the authority to do so, on terms they decide.
After weighing all this, I ended up voting Yes on 10, with the hope and understanding that it will take more efforts like Prop 1 and Prop 2 to address the increase in prices this will bring about.

And... that's it! I guess this ballot is relatively tame as far as Californian elections go, though I'll be extremely interested to see how the other Congressional Districts in the state turn out. And turnout in general: as I keep noting/complaining, the big statewide races in California tend to be foregone conclusions, which I imagine makes people less motivated to vote here than in battleground states. But with the higher overall interest in politics over the last two years, I hope that leads to greater engagement and participation at all levels. At the end of the day, the local and regional votes we cast make a tremendous difference in our day-to-day lives, and our big-picture energy and motivation can be usefully channeled into human-scale change. 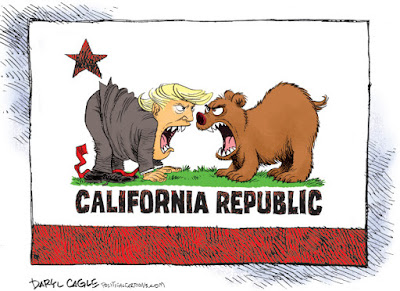