Just a quick update on my return to Star Wars: The Old Republic:

I'd wondered before if my swift level advancement was due to playing during a double-XP week. Nope! Even after the event ended, my progress was very quick. I reached Level 48 at the end of Chapter 1, right after completing Alderaan. The game continues to hand out XP Boost items, none of which I have used. I'm curious if the curve will get any steeper after I hit 50, but I suspect that it'll remain fairly quick all the way until the new cap at 70. 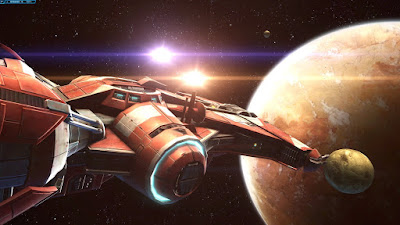 It's interesting to see how different games handle being overleveled. In LOTRO, if you're 10 or more levels ahead of the enemy, they cease to threaten you: you can walk right past them, or even through them, without them becoming aggressive. This makes it a breeze to complete quests in low-level areas; granted, those quests won't provide meaningful XP or rewards for your level, but it can still be nice for story-completion purposes.

In SWTOR, the game will instead limit your effective level: if you are level 34, but you're currently on Taris, where enemies are around level 16-20, the game will adjust your level down to 24. It doesn't take away any higher-level abilities, but scales down your raw health and power to be more in line with your foes. That means that fights will be at least somewhat meaningful - you can't just one-shot anybody - but you're still rewarded for being overleveled. It looks like your rewards are also scaled, so you'll receive a decent amount of XP for completing a quest, whereas in LOTRO (or, I'm pretty sure, the original SWTOR) you would just receive a tiny 5XP award if you were significantly over-leveled. 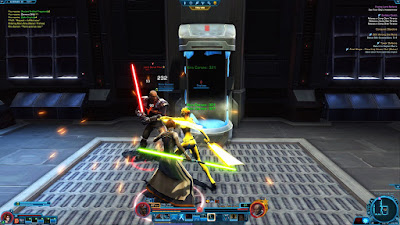 I'm a bit curious about the meaning, if any, of the difference between the two games. One obvious difference is the structure of the content. SWTOR has a ton of different activities you can use to level (PVP combat, story quests, space-fighter missions, multiplayer flashpoints), but the actual story quest is very linear: except for a few minor deviations where, say, you can choose the order in which to visit Tatooine and Alderaan, you must complete each story element to advance to the next. In contrast, LOTRO has far more options in how you advance through the content. Some players visit the Trollshaws after the Lone-Lands; others head to Evendim instead. After reaching Rivendell, you can continue east to the Misty Mountains, or north to Angmar, or west to Forochel. Some players will make their way south down the Misty Mountains through Enedwaith and Dunland, while others strike east through Lorien and Mirkwood. Anyways: all that to say, SWTOR assumes that you will visit every planet in the game, while LOTRO assumes you will skip many regions, and that probably impacts their decisions on why players visit a region they're too high-level for. In LOTRO it's probably because they just want to see the beautiful sights or follow up an Epic Quest line. In SWTOR it's probably because they spent time doing non-story quests.

I'm digging a bit deeper into the whole free-to-play / cartel coin situation. Here are all of the unlocks I've bought thus far:

I got the first one early on, and just bought the last. I kind of wish I'd gotten it earlier, so I could have swapped in my new look for Kira near the beginning of her plot instead of near the end. It is a little odd that you only reach those vendors after traveling with your companion for quite some time, as the changes in their look are pretty significant. Still, better late than never, and I'm enjoying making my party more unique-looking. 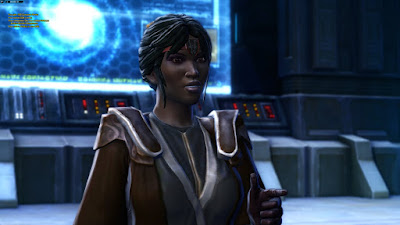 Oh! I also have had fun with costumes. Back when I was playing before, the main approach to making a decent-looking character was to use custom (orange) gear which had a look that you liked, and then keeping its mods updated as you leveled. Sometime in the past six years, BioWare has added a cosmetic outfit slot so you can display a different outfit than the one which is providing your stats. This works somewhat similarly to the one in LOTRO; the biggest difference is that the SWTOR version charges you credits each time you add an item to your cosmetic outfit, so the stakes for experimenting are higher. Anyways, I spent a very productive hour trawling the cheap aisle of the GTN looking for secondhand gear, and threw together an outfit that I really like and will probably keep for a while. Which, again, is funny - I have zero desire to go thrifting in real life, but happily throw together cute combinations in video games. 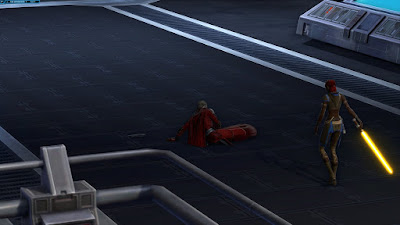 It's a somewhat similar situation for companions. All of their gear is now effectively cosmetic, and doesn't affect their stats, so you can put on whatever you like. As I discovered to my chagrin, though, you can't give them items that they can't use. I only figured this out after dropping several grand on the GTN buying light armor with a level requirement of 65. Ah, well. I did get a new chestpiece for Kira, and will be holding on to the other pieces until she can wear them, assuming I don't find something better first.

I neglected to talk about this in my previous post, but, for better and worse, one of the more interesting elements of the Republic plot line has to do with the Republic itself. Particularly while you're visiting Coruscant and meeting with Senators, there are several plots that deal with the mechanics of government there: elections, representation, campaigning. 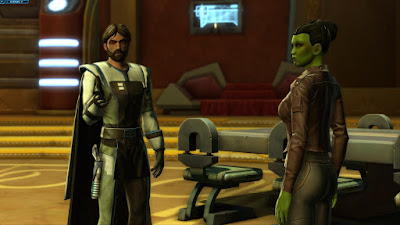 On the whole, it's a rather negative portrayal. Senators scheme against one another, sharing polite words in public while arranging betrayals in private. One charismatic woman was elected on a reform platform, but took money from a criminal enterprise to fund her campaign. Another senator is a populist advocating for the Republic to disown the Jedi in order to curry favor with the Sith.

On the one hand, these are actually interesting scenarios! Unlike the binary choices I complained about in my last post, there's some room to consider alternatives and values here. Unfortunately, though, because this is Star Wars, at the end of the day the game imposes its own Light Side / Dark Side value judgment on each situation. It doesn't matter if that woman is delivering real, meaningful structural change and lifting people out of poverty: her money is tainted, so supporting her is Dark Side. It doesn't matter that the man is betraying the principles of the Republic to support the Sith: he represents the will of the people, so supporting him is Light Side. Does that seem contradictory? Don't blame me, take it up with the developers! 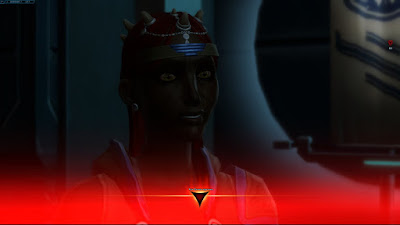 In a broader sense... I shouldn't be surprised that, in a post-Phantom Menace game, we get such an underwhelming view of the Senate. The overall impression you get is that it's sclerotic, dysfunctional, indecisive, corrupt. Again, the complexity of that picture is interesting, and does make the Republic/Empire dichotomy more compelling than it would be otherwise. But, playing this game has made me increasingly unhappy that we have so few positive portrayals of representative government in our speculative fiction. Fantasy is probably the worst offender, where a nation's goodness or badness entirely derives from the monarch leading it. (And it's not for lack of historical examples, whether classical Grecian democracy or medieval Italian republics.) Science fiction is a little better, especially Star Trek, but on the whole seems to veer towards militaristic fascism or corporate dystopias.

Anyways! It's so rare for us to get a sci-fi/fantasy game that includes scenes of democratic governing, and it's really discouraging to have it portrayed in such a snide, dismissive way. Over and over this game presents us with the idea that debate and consensus are for weak, sniveling cowards unwilling to make difficult decisions, and that only bold unilateral action can solve problems. That's the opposite message we should be sending. 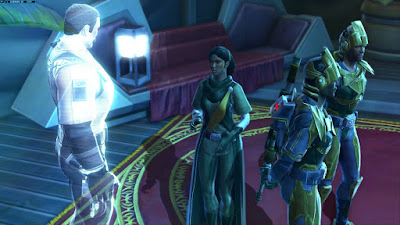 Or, maybe to put it another way: in speculative fiction, non-representative governments (kingdoms, empires, and so on) can be shown either critically or non-critically. But it seems like representative governments are only shown critically. I definitely don't want to say there's no place in fiction for critiquing problems with democracy - they're definitely there! - but looking over the genre as a whole, it's held to a far higher standard than authoritarian governments are.

Again, though, it's hard to blame the developers for this - it's a big part of the Star Wars DNA, centered on the hero's journey instead of the betterment of society. That's one of the many reasons why I'm cautiously optimistic about what the Expanded Universe might look like after the sequels are finished, as they're doing admirable work in dismantling the bloodline-obsessed values underlying the original movies.

As for the actual Jedi Knight story line: It's pretty good. The Imperial Agent one was way better, but I'm still relatively early in the JK plot, so I shouldn't pass final judgment yet. I've avoided reading any spoilers of the plot, but it was relatively highly rated, and the consensus seems to be that it's one of the most "Star Wars" plots. I'd say that's true, and... it actually reminds me in some ways of the sequels (which were started after this game was released) in the way it seems to replicate the story beats of the original trilogy. 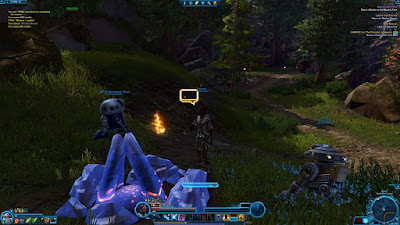 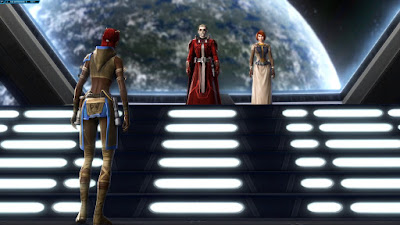 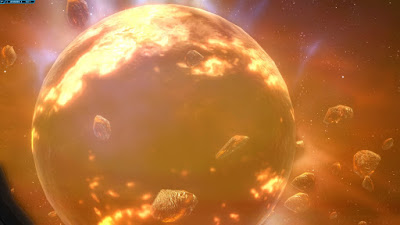 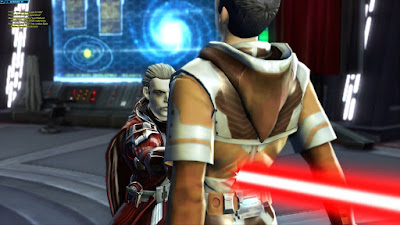 I suspect that, in 2011 when we were starved for more Star Wars stuff, this all would have felt awesome. It now all feels pretty familiar. But, again, I have two chapters left to go, and haven't even recruited half of my crew, so I imagine there's more story to come.

Despite all my grousing, I'm having a lot of fun! It feels good to be a hero, to help innocent people and solve problems and make the galaxy a safer place. There's a nice rhythm to combat as a Jedi Knight, and you look stylish as hell while swirling around two lightsabers.  I'm determined to press onward and see what else the game has in store for me.
Posted by Christopher Charles Horatio Xavier King III, Esq. at 8:59 PM