After a long absence of six years, I've finally returned to a galaxy far, far away. I had a hankering to start an RPG, but the ones that most intrigued me also came with daunting 60+ hour playtimes and new systems to learn. I was in the mood for something a little lighter, then I remembered that I had always meant to check out the expansions to Star Wars: The Old Republic. I reinstalled, relaunched, and restarted: my new character, the Zabrak Jedi Sentinel Trel'ves, joins the Imperial Agent Seberin and his adopted daughter the bounty hunter T'may in a new, sprawling clan charting the future of the galaxy.

There have been a lot of updates in the six years since I left. The most obvious one is the transformation from a subscription model to a free-to-play game. The system is somewhat similar to that of Lord of the Rings Online. Players can choose to pay a monthly subscription, which allows full access to every feature of the game, or play for free with some restrictions. Players in the latter category can use a special currency, which can be purchased with Real Money or earned in-game, to permanently unlock those features. The same currency can be used to purchase attractive clothing, furniture, toys, and other fun stuff.

Unbeknownst to me, because I had set up a Security Key (an offline two-factor authenticator) prior to canceling my subscription, I had continued to earn 100 Cartel Coins per month during the entire period of my absence. So, upon rejoining, I immediately had over 7,000 coins to spend, enough to buy a ton of things. I've mostly held on to them so far, just unlocking a third crew skill slot and a personal Rocket Boost for faster travel around the map. Much like with LOTRO, I'm finding it just as much fun to research and plan my spending as to actually buy stuff.

A ton of new things have been added since I left. Some of these, like multiplayer space battles and guild ships, hold little interest, while others are great. The Legacy system is really cool: my established characters can unlock perks that apply to all other characters on my account, giving my new Jedi Knight easy access to resources that otherwise would be hard to acquire. One major example is Strongholds, housing you can buy on various planets. There's aesthetic fun to be had in decorating these spaces, but they're also incredibly convenient as they offer storage that can be shared across all characters, including between the Imperial and Republic faction! This means that, among other things, I could have Seberin craft a hotrigged speeder bike and leave it in the closet for Trel'ves to pick up. And Trel'ves can store excess crafting supplies in here, so any future characters can use them in their own recipes without needing to gather their own.

There were a lot of possibilities in restarting my game: I had parked Seberin at the old end-game level cap of 50, and could dive right into the expansions. Or I could continue leveling T'may. But I was mostly playing this for story. In SW:TOR, any given playthrough has two major plot arcs: a class-specific story (such as for a Sith Inquisitor, a Smuggler, etc.), and their faction story (Imperial or Republic). In order to maximize new story, I decided to start fresh with a new Republic character, so I could see how the struggle between the factions played out from the other side.

I immediately faced a choice: which species to play as? This was the first area where my free-to-play status became a factor, as I had a limited selection to choose from: ordinarily I would need to pick between Human or Zabrak, although I had unlocked the Cyborg option by virtue of taking Seberin to Level 50. Other species could be purchased for Cartel Coins. I decided to go with Zabrak, because aliens are way more interesting than boring old humans. As usual, I spent an inordinate amount of time in the character creator, and am pretty happy with how Trel'ves turned out. I later discovered that you can pay a very modest credit fee to change your appearance, and touched up her scar a little bit. 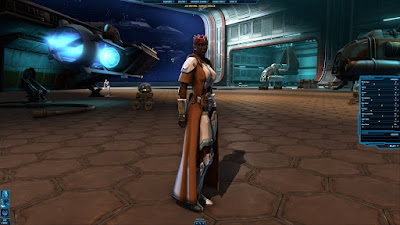 The Jedi Knight story starts out fairly interesting from the beginning. The first villain you face is not some evil Sith Lord: instead, it's a rogue Jedi, who believes that the Jedi Order has grown too soft and is unprepared to face the threat of the Empire.

I have a well-known antipathy to binary morality systems in games, and on the surface the Light Side / Dark Side dichotomy is the worst offender of the lot, with cartoonish villainy on one side and simplistic virtue on the other. But as seen through the BioWare prism, it actually gains a little nuance and interest. I've previously sung the praise of the Imperial Light Side storyline: as you dive deeper into the game, you come to grok the difference between the Imperials and the Sith, which fight under the same banner but are not one and the same and do not share the same hierarchy. (With my recent readings of Bonhoeffer, I now think of Imperial Intelligence as being an analogue to the Abwehr, with the Sith filling the role of the Gestapo.) Choosing to pursue the Light Side under the Imperial banner can mean choosing to impose a strict but beneficial order over chaos; it can mean honoring alliances to bolster military power instead of undercutting them for personal gain; it can mean refusing orders because they harm the Empire's strategic goals. The climax of the Agent storyline has the best (really, the only even vaguely sensible) explanation I've heard for why people would choose to side with the Empire: stripped of its Sith trappings, the Empire is an unapologetic meritocracy, where those who have the greatest skill and determination can rise to the top. There are no princesses in the Empire, no patrimonial dynasties, no obligation to appease the masses.

At first glance, the Republic storyline is a lot less interesting. Dark Side choices are evil and dumb and counterproductive. Light Side choices mean that you do the right thing and get the better outcome. Still, there are a few spots along the way that are interesting, and I think they help highlight some elements of the source material that are troubling. High on this list is the prohibition against love and friendship: Jedi are meant to renounce all bonds. In one early quest, you strike up a relationship with a young chieftess of a tribe. She is mourning the loss of her mother, and looks to you for comfort and friendship. I accepted, of course, and was shocked to see that I'd gained Dark Side points for doing so. The game follows through on this in a nice way, though - you can confess your action to your mentor (gaining LS) points, but then also argue that it was the right choice in the first place. Roleplaying! Or there's a weird quest where another Jedi teacher is obsessed with the possibility that two of his students are growing romantically involved. So the "Light Side" approach is to SPY on PEOPLE MAKING NOOKIE and then BREAK THEM UP. Or you can choose to follow the Dark Side by, uh, allowing love to flourish in this world. I dunno. It's weird.

As the game continues, you start getting into some more political situations. Here, the choices often come down to "Light Side: Do the right thing in the moment, at the cost of the Republic's strength and/or giving an advantage to the Empire" versus "Dark Side: Achieve a strategic victory by lying/cheating/killing." That's kind of interesting, and there were a couple of specific points where I was genuinely tempted by the Dark Side. Unfortunately, though, the game doesn't really follow through on this tension. Almost invariably, the "inferior" Light Side choice ends up leading to the best outcome after all: the Imperial officer you allow to escape decides to aid you, the crime lord you expose continues to cooperate with the Republic. The game seems unwilling to make you choose between having your cake and eating it. Which, to be fair, does feel very Star Wars - the heroes triumph by doing the right thing - but also makes the choices feel rather mediocre.

At least so far! Right now I'm only up through Taris. Despite the game warning me that I'm earning XP at a diminished rate due to my free-to-play status, I'm leveling insanely quickly, just hitting level 40 on a planet that's capped at 20. I figured this was due to the game rebalancing to encourage quicker progress, which seems to be a common thing for MMOs: as the endgame recedes, it's in the developer's interest to help move newcomers through the dead early zones quickly and bring them to the populated climax. But I also just found out that I apparently was playing during a "Double XP" week, which doubtless helped as well.

All of which is kind of moot - I'm just playing for the story, so the overall power curve and resource acquisition really doesn't matter much to me. Speaking of which, though, I'm struck by the very different vibe I get when playing SW:TOR versus LOTRO. Lord of the Rings Online is a calming, contemplative activity. I love just wandering through its landscapes, staring at the beauty around me, searching for inner stillness. There's a storyline in LOTRO, quest-givers and plot, that advances you through the map and the game. And that story is rather perfect for what it is, inhabiting the spirit of Tolkien's works and celebrating grace, but it only serves to guide you through the world, and never feels like the focus of the game.

In contrast, playing TOR feels much like watching one of the movies. It's exciting, and slick, and propulsive. The landscapes there can also look gorgeous - I just left Nar Shadda's stunning cyberpunk skyscape, which still looks beautiful after all these years - but they also feel somewhat sterile and decorative. They're the kind of spaces you blast swiftly through on your speeder, thinking "Oh, that looks cool," as you rush ahead towards your confrontation with the Dark Lord. 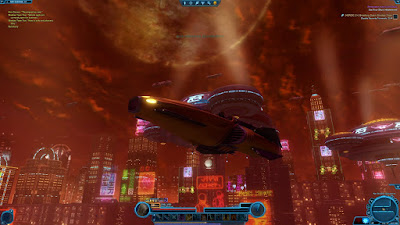 Which, ultimately, is a good thing. I'm always nervous that MMOs will get their hooks in me and consume my precious free time. I'm grateful that TOR is an MMO that plays like a traditional RPG, and once I finish Trel'ves's story I'll be able to step away. And I'm glad to have Middle-earth waiting for me whenever I need it, without worrying that anything bad while happen while I'm away.
Posted by Christopher Charles Horatio Xavier King III, Esq. at 7:35 PM