You'll be pleased to learn that the galaxy is now safe. You're welcome! 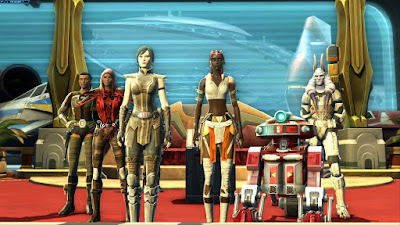 This has been a bit of a whirl, but Trel'ves is now up to about the point where Seberin left off back in 2012: Level 50, completed the class and faction storylines, and dipping into the Interlude end-game content. The difference, of course, is that Seberin eventually segued into true multiplayer guild business, while Trel'ves has a large amount of new single-player content to look forward to.

I've remarked before that leveling and progression is much faster now than at launch, as seems to generally be the case for maturing MMOs with receding endgames. That said, it feels like it's taken roughly the same time to reach this point. I guess the fights and stuff along the way have been easier this time, but as I'm still hitting all of the same sidequests and stuff, I'm spending about as much time as before in cutscenes and walking around, which still adds up to quite a long time. It's kind of amusing that I started this off thinking that returning to SW:TOR would be a quicker experience than picking up a brand-new CRPG. Nope! 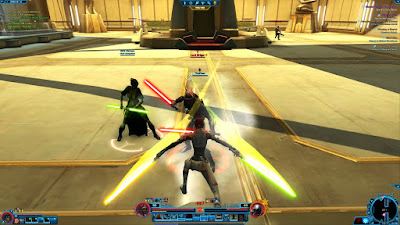 There are quite a few quality-of-life improvements that helped streamline this playthrough. A lot of these are tied to the Legacy system, which I think is really good design: a brand-new player's initial playthrough will be a bit slower and guide them through the systems gradually, while subsequent characters can hop around to the spots that interest them. These include things like teleportation options to a variety of locations (I find the trip back to your starship most useful), and purchaseable cooldowns on Quick Travel. You can get this all the way down to 0, which significantly cuts down on the tedium of retracing your steps to turn in quests. 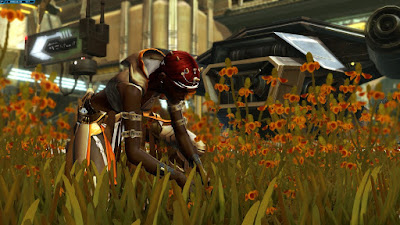 Another really nice change has been transitioning Flashpoints to Story Mode. At launch, Flashpoints were group-only content that you could only complete with three other decently-well-geared and competent human beings. A lot of these have now been retuned so a solo player can finish them. These are a blast! I'd tried a couple of them with T'may back when I was leveling her, and have been more consistent about playing through the story-mode ones with Trel'ves (thanks to this very useful story order guide). They're a significant step up from the normal landscape questing process. They're a lot more exciting, cinematic, and fun: instead of roaming back and forth over an area juggling simultaneous quests ("Defeat 5 Wampa Rats," "Disable 3 Uplink Poles," "Retrieve the Crystal Trigger"), you have a strong narrative pull along a single path with a clear, compelling objective. The fights along the way are all more interesting: not overly hard, but they feel more substantial, call for some tactics, and have more engaging animations and sound effects. There's the same amount of choice-and-consequences as regular story quests, but because you're following a single plot line, you can more easily remember what you did and trace through the implications, instead of squinting at the screen and muttering "Who are you, again?" 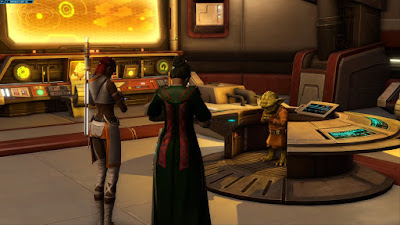 My focused playthroughs of the Flashpoints also highlighted an oddity. Star Wars: The Old Republic is an MMORPG, but it's also a quasi-sequel to Star Wars: Knights of the Old Republic, a beloved single-player RPG. The plot of the MMO picks up roughly one generation after the end of KOTOR 2. Most of the links are just in background and atmosphere, but the direct continuation of the KOTOR plot happens entirely through Flashpoints, which, at launch, were the one part that you couldn't complete as a single player. I'm still curious why this was: was it an attempt to strongly urge the solo players who only bought the game because of KOTOR to get involved in multiplayer? Regardless, it makes a ton of sense that these segments have now been rebalanced for solo play and make them more accessible to people who want more KOTOR.

That said: It's also interesting that the story is split across mutually exclusive faction arcs. My years-ago run through the Imperial-only flashpoints gave crucial insight into the fates of KOTOR's companions; my more recent excursions into the Republic line finally shared a glimpse of Revan. I guess that's a nice way to keep subsequent playthroughs / alts more interesting, and it also makes the worldbuilding feel really cool and vast and interconnected. 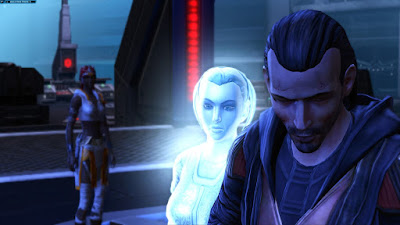 I think that, ultimately, that's one of my favorite things about SW:TOR - just how big the universe seems, and the prismatic effect you get at watching the same events unfurl from different perspectives. Or even different outcomes. Regardless of whether you are playing as a Republic or Imperial character, the overall story has to be "You are the hero and did great stuff and the galaxy has changed as a result!", while the actual facts on the ground have to be the same regardless. 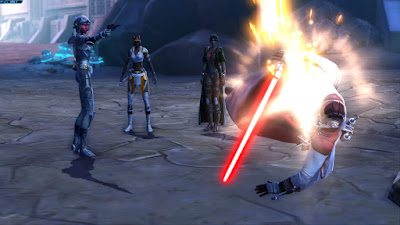 I feel like the Imperial progression makes a bit more sense. Again, it's been ages since I played, but I feel like there was a strong sense of momentum there: as you contributed to the war effort on each planet, you won a string of victories, pulling those planets into the Empire's control and setting the stage for future planets who were cowed by your actions. So your early work on Taris and Tatooine emboldens the Imperial faction in Alderaan's civil war; conquering Quesh and Hoth and Taris inspires the uprisings on Belsavis; all of this makes the Voss open to alliance; and finally, as a capstone, you launch an all-out assault on the core Republic world of Corellia, finally crushing them with a decisive victory. 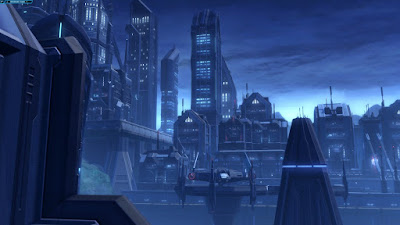 The Republic side goes through almost the exact same progression, but instead of regular momentum, it's always two steps forward, one step back. You put down the Empire's play for a Hutt alliance on Nar Shaddaa...  oh, but now they're trying to win the civil war on Alderaan. You take care of that and pull Alderaan back into the fold... but now they're trying to seize Balmorra's weapons factories. You thwart their plots on Hoth... but now they're stirring up trouble on Belsavis. So you put that down, but the folks on Voss are still super-interested in them. You defeat the Empire everywhere in the galaxy, but they're still launching an all-out war on the core world of Corellia. It feels like you're constantly putting out fires, running around and reacting to the Empire's incursions. 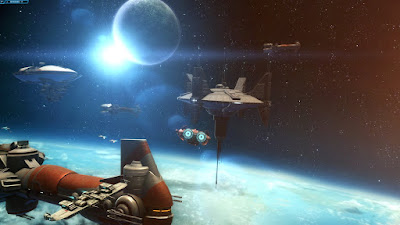 Which... I guess that's how it usually felt in the movies, and also the usual good-guy/bad-guy dynamic in games and novels and such. It just feels kind of odd to have such a strong difference over such a long period of time, and to see it from both perspectives. The good guy needs to always be the underdog, fighting a more-powerful enemy against overwhelming odds, but that gets kind of hard to convincingly maintain over a hundred hours where you're constantly winning. 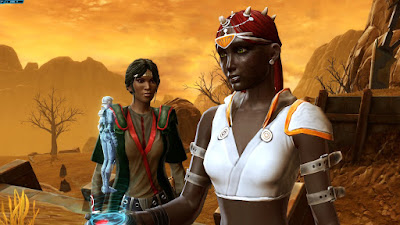 Aside from the general shape of each arc, though, it's really cool to have information gleaned in one playthrough help illuminate events in another. There are tons of examples even just from these two class stories, but the big one I'm thinking of now is the climax of the game, with Darth Malgus seizing control of the stealth fleet and declaring the New Empire. First, the world state of this event can be very different: if you're an Imperial, then Malgus is a traitor launching a coup against the true Emperor; if you're with the Republic, though, the Emperor is already dead, and Malgus is just making a bold move to succeed him. 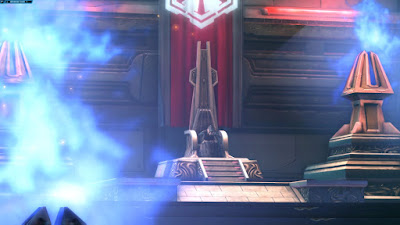 Now: In the Jedi Knight story, you got to know the Emperor rather well during the game. In contrast, the Dark Council is an enigma: I think they're referenced in passing a couple of times, but aren't really highlighted as a major threat. You're mostly concerned with the head, not the underlings. 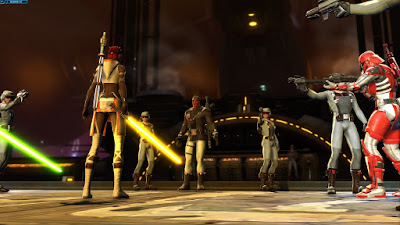 In the Imperial Agent storyline, it's the exact opposite. The Emperor is a total enigma: you never hear from him, or even get the impression he's very involved in running the Empire. He's a distant, brooding figure: pursuing his long-ranging arcane schemes, leaving his Council to manage the actual administration of the Empire and the war, while desperately vying for the favor of their disinterested liege. You get to know the Council very well: their factions, their rivalries, their tensions with the civilian and military infrastructure driving the Empire. 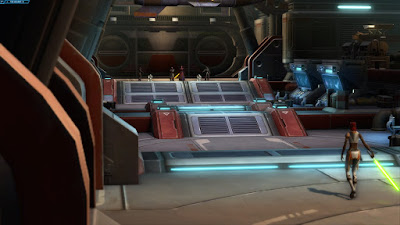 All that to say, I think the whole False Emperor arc is a lot more interesting if you've been through both of those paths and know both the Emperor and the Council. It doesn't necessarily need it - the story makes sense with only a few pieces of the puzzle - but it gets cooler and more compelling once you add the other facets to the story. 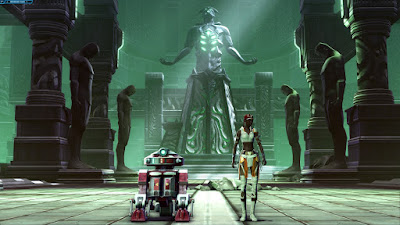 I'm like 99.5% sure I won't replay this game with yet another class, but this experience makes me very curious about just that: what additional lore and characters will be illuminated by their own stories, both for their own sake and to help add more dimensions to the stories I've already played.

This seems like a good point for a quick rundown on the Jedi Knight storyline: 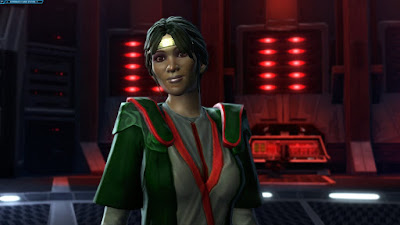 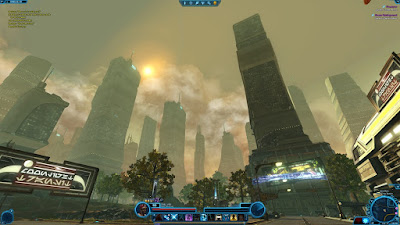 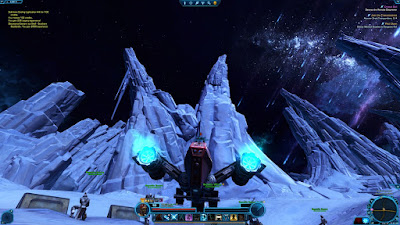 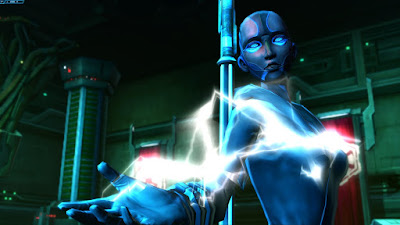 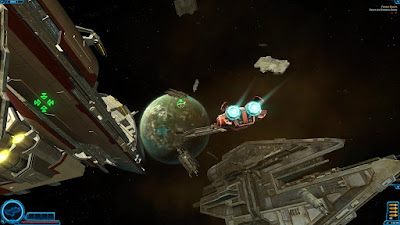 Favorite quote: "I'm in the prime of my life and I'm spending it with people who enjoy running around on exploding planets." - Doc 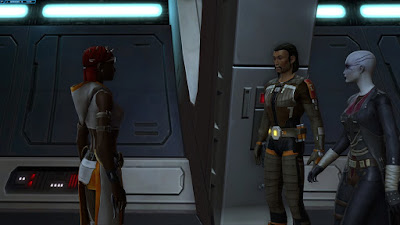 I was planning to roll right on into the expansion content, which is kind of the whole reason I started this playthrough in the first case. But it sounds like a new content update is dropping in December, so I might postpone my planned one-month subscription to overlap with that. The way SW:TOR handles expansions and subscriptions is kind of unusual and very cool: whenever you subscribe, you automatically and permanently get access to all the content in the game at that time, even after you unsubscribe. It looks a lot simpler than LOTRO, which usually requires a combination of subscription, expansions, and quest packs to get access to everything. 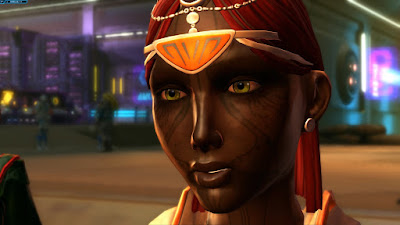 Anyways - I think there are still a few Level 50 things I can do in the meantime, but I'll probably slow my pace down for a bit, while checking in often enough to keep my key combinations memorized. But I'm definitely looking forward to making my way through all of the expansions and meeting the new companions in store!
Posted by Christopher Charles Horatio Xavier King III, Esq. at 7:41 PM