How weird is it that there are multiple cyberpunk bartending games out there? After the excellent Red Strings Club, I was looking forward to another spin on the, uh, genre, with VA-11 Hall-A: Cyberpunk Bartender Action. There are some surface similarities: both are dialogue-heavy, have a retro art style, feature strong transhumanist themes, and, y'know, involve mixing drinks for a parade of colorful futuristic patrons. That said, the games ended up feeling very different: in tone, in gameplay, in message. 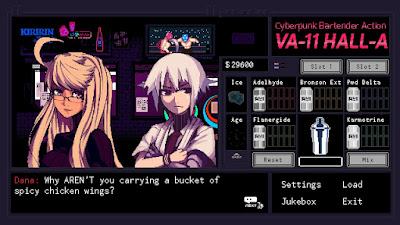 The Red Strings Club featured a surprisingly varied set of gameplay mechanics, from crafting with a lathe to drink-muddling to suspect-confronting to hacking and so on. Valhalla has a surprisingly limited (yet effective) mechanic: mixing drinks. That's basically it. Select the ingredients, optionally add ice or age, shake it up and serve. That's pretty much 95% of the game. 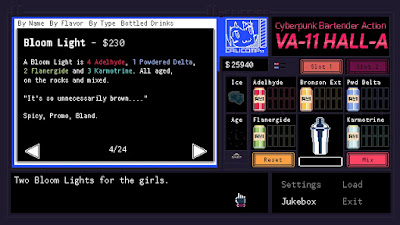 This is especially interesting given that this is such a dialogue-heavy game with a branching plot. While your main action is mixing drinks, the vast majority of your time in the game is spent reading dialogue, both of your own character and of your patrons and coworkers. For quite a while I kept expecting to get a traditional dialogue menu: say A or B in response to this statement?  That never comes. Instead, the branches follow your actions. Serve someone a drink with extra alcohol? They might loosen up more and become more talkative, or fall asleep under the bar. Mess up their order? They might leave in a huff. Remember their favorite from last time? They'll grow more attached to you. All along you'll keep talking to them: you can't adjust your character's attitude or voice, so Jill remains a very distinct character. And an incredibly likeable one, too! While others will periodically comment on how she seems cold or distant, you have the benefit of seeing her warm relationships with close friends, as well as her inner thoughts, and I grew very fond and protective of her over the course of the game. 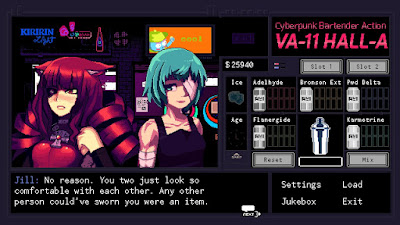 There are only a handful of non-bartending actions that I can think of. There are a couple of one-off mini-games, which are brief but fun, and give you the chance to interact with folks outside of your normal routine. The other big one is the Jukebox: at the start of each shift, you load up the songs to play. At first glance this is entirely superfluous - who cares about the music? - but it becomes super-interesting. The tone of a conversation can change drastically depending on what kind of music is playing behind it: the words might be exactly the same, but you'll pick up a different vibe depending on whether the music is aggressive, melancholy, playful, triumphant, or whatever. And it's all random! I'm left thinking that I may come away with a pretty different impression of the game's story and its characters based on when the tunes I selected happened to be playing, versus someone else who did everything the exact same time but ordered their songs differently (or even read significantly faster or slower than me, causing the music to drift over different conversations). 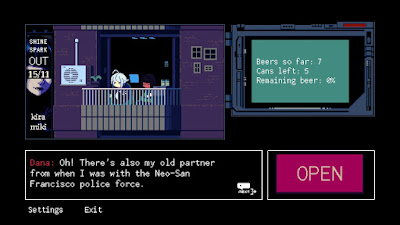 It would be interesting to hear the game "scored" by someone who knew in advance which conversations were coming up and selected songs accordingly. I'm also left wondering how other video games might turn out differently just by changing their music and keeping everything else exactly the same; I'm reminded of those awesome movie trailer edits that drastically change the impression of a movie by just changing the sound. 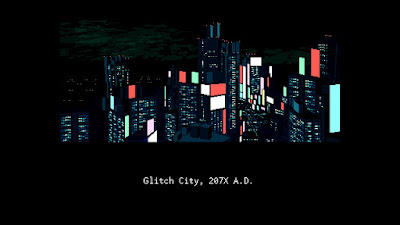 Anyways: I'd cycled through the jukebox dutifully, going forwards and then back each time I could select songs, but eventually realized that I was landing on the same ones over and over. I finally started to mix it up more near the end and heard quite a few tracks that had never come up before. If I were to do it over again, I'd probably either keep a single playlist up until it had played all the way through and looped back, or else make use of the "Shuffle" feature to give more variety.

There isn't much else in the way of gameplay tips, but here are a few random observations: 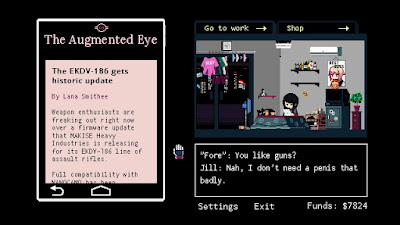 I think it took me about a week to play through the game, usually playing for about 1-2 in-game days per real-world day. That seems like a good cadence, as recent events would stay fresh in my mind. You could definitely "binge" this in a more compressed session, which would probably make it easier to remember special drink preferences.

Besides Red Strings Club, the other game I thought about a lot was Read Only Memories. I had to double-check that this game is from a different developer, because there are so many references to that game here. Hassy ads pop up multiple times, there's a Robot Turing toy, and your boss Dana has a long story about her time on the Neo-SF police force, and I'm like 80% sure that the partner she describes is a character in ROM. I'm curious if the two games shared common personnel, or if it was more of a love letter or homage to the other game. Likewise, it was really fun to see Christine Love show up as an unseen but significant character in this game. It felt kind of like a Kickstarter backer reward sort of thing, though I didn't see anything in the credits related to crowdfunding, so that also may have been an homage. One thing all these games have in common is positive portrayal of LGBTQ characters, with those portrayals ranging from the sympathetic to the exuberant. Valhalla seems more... relaxed, maybe, than other games in this space. There's a wide range of orientations and identities on offer, but they tend to be secondary attributes of the characters, unlike ROM, where those identities seemed central. Jill is mostly interested in women, but had boyfriends while growing up and has some preferences when it comes to men. Jill carries a torch for Alma, who is frustratingly straight. Jill's ex-girlfriend Lenore was only ever interested in women. Same with Betty. Dorothy likes everyone. 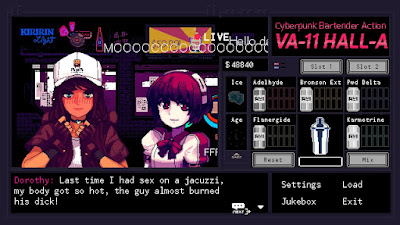 There's a fair amount of transhumanism in this game, which is most obvious with phenomena like "cat boomers" such as Stella who have received genetic and cybernetic enhancements, but seems widespread enough to be almost mundane: Dana has a metal arm, and Alma has metal hands, and neither of them think about it much at all. The game is more interested in artificial intelligence and the possibility of created beings becoming compatible with humanity. Here, that is mostly explored through "Lilim", essentially androids who freely move among humans, carrying on their own jobs and passions, somewhat like but not the same as people.

For the most part this is all very cool. The character of Dorothy can be a bit unsettling: on her own terms she is fun and sweet and exuberant, but it's pretty jarring to connect her physical appearance with the acts she performs. I think this is getting at something we as a society will be dealing with in a couple of generations: when behaviors and relationships between certain people are negative, if those same relationships can be acted out virtually and without harming others, do they become okay? It feels like the game is saying "Yes," though I might be reading too much into it. 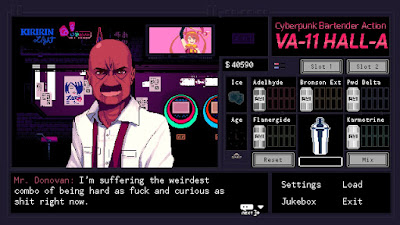 Apart from Dorothy, the other character who gave me serious reservations was Donovan. It's a bit... odd that there's just a single person of color in the game, and he's hands-down the most detestable: threatening, condescending, leering, predatory, conniving. I don't think this is intentional, but it still kind of bothered me.

On the other hand, it's interesting that the game front-loads your least pleasant customers. Right off the bat you're serving Donovan and the worst iteration of Ingram, and the game seems kind of dire. As the days go on, though, you spend time with old friends (Alma), friendly customers (Becky and Deal), and sweet new clients (Kira*Mika, Sei, Stella). I thought that was a bold choice. I would naively think that you would want to welcome people into a game like this with the most fun and pleasant people, and then progress on to the harder customers after you have the ropes down. On further reflection, though, setting the bar low is probably a better design. You come to really appreciate the good customers later, after getting your expectations set so low, in a way you might not if folks were nice to begin with.

For the most part, though, I really liked everyone in the game and got very invested in their relationships. It seems like there are multiple endings; I got the "Alma" ending, though in retrospect I kind of wish I'd aimed for Sei instead. 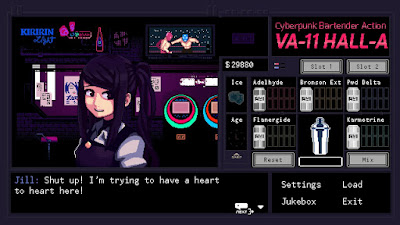 The game ends on a much deeper emotional level than I'd expected, dealing with grief and healing and nurturing. I'd kinda hoped for some kissing, but this is good, too! I'd come to care a lot for Jill over the course of the game, and I feel good about her future after all she's done at the end.

Another really fun indie game for the books! It looks like there's already a sequel planned, N1RV ANN-A, which I'll definitely keep an eye open for. I'm impressed at how they managed to make such a strong story-focused game without any of the ordinary interfaces of an adventure game or visual novel or other conventional structure, and am looking forward to returning to this world and sensibility in the future.
Posted by Christopher Charles Horatio Xavier King III, Esq. at 9:05 PM