Everything That Can Be Invented Has Been Invented

We live in a highly specialized society. I'm pretty good at writing Android apps for mobile phones, but I have only the vaguest understanding of the many technologies that underlie my career. If I had to I could probably write a compiler, but I couldn't manufacture a phone, or build a cell tower, or fabricate a circuit board, or create a monitor; going deeper, I couldn't make the steel for the tower or the silicon for a circuit board or the liquid crystals (?) for a monitor; heck, I can't even mine the iron to make the steel, and if someone asked me to collect some liquid crystals my first instinct would be to go looking for a wizard. 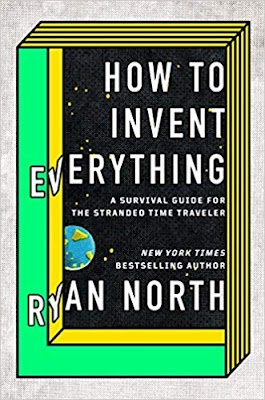 Fortunately, I now have a book that will solve all my problems: How To Invent Everything, by the inestimable Ryan North. I've avidly followed his online comic Dinosaur Comics for many years, and have felt oddly proud at seeing him branch out and succeed in so many other ventures: publishing books (To Be and/or Not To Be), writing comics (Adventure Time, Squirrel Girl), engaging in thoughtful and nuanced literary criticism (B to the F), climbing out of a hole. In a fun little coincidence, I received his latest book as a Christmas gift, and then got to see him in person when he came to the Bay Area and spoke at a library about 1500 feet away from my home. In person he has the same voice I've come to enjoy so much over the years: fun, wry, curious, generous. He gave a great, discursive but fascinating talk that covered the history of the human race and how he got into comics writing. One major theme to which he kept returning was just much time humanity wasted along the way: thousands and thousands of years when we had all the equipment necessary to do something but hadn't thought to actually do it. He also held a wonderful Q&A session, good-naturedly laughing at the jokes helpfully offered by an elderly veteran ("You're a comedian, here's some jokes you can use!") and discussing everything from his own favorite comics to Aphantasia to the (poseable! never posed!) clip art source of his Dino Comics to... well, all sorts of good and interesting things.

The book itself is great. The conceit is that it's a guide written for time-travelers who get stuck in the Earth's past: at any time that they arrive after humans have started to, uh, become human, it gives detailed and practical instructions on how rebuild the sort of civilization we're used to in the 21st century from scratch. It's designed so you can flip around and read about individual technologies and inventions that you're interested in, but I read it straight through from cover to cover and loved it. It's structured to start with some relatively simple things, like how to make a fire, and then what you can do with that, like how to make charcoal. I've only ever thought of charcoal as a material for making delicious grilled meats, but it's incredibly useful and is used in turn to create a wide variety of other things. You'll learn superior farming techniques so your society can create a calorie surplus, which will then free their bodies and brains to take on more specialized jobs, and eventually you'll be able to teach miners how to mine, blacksmiths how to smith, farriers how to shoe, and so on.

Coolest of all, the book goes all the way up to some truly modern inventions, covering the basics of the internal combustion engine, the airplane, and, yes, the computer. All of these have great diagrams giving helpful context to the descriptions, and are also presented with practical context. While the book tells you how you can create an internal combustion engine, it also cautions that your society will likely not have the precision engineering necessary for a very efficient one, and so you'd be better served by the simpler steam engine. The computer section stirred memories in my mind of my CS201 course back in college, with its NAND gates and full adders, but it also demonstrated how non-electrical computers could be constructed, including ones that used water or undersea crabs. (Which in turn reminded me of Nell's analytical engine from The Diamond Age - I need to re-read that! North and Stephenson share some of the same gift for demystifying technical arcana in an entertaining way.)

This book was super-fun! It was a light and compelling read, but never felt dumbed-down. The strong humor throughout made everything interesting, above and beyond the naturally intriguing how-to structure. I had a blast reading this, and while I hope I never need to rebuild civilization from scratch, I'm in a far better position to do so now than I was last month.
Posted by Christopher Charles Horatio Xavier King III, Esq. at 5:54 PM