And so it begins! That one TV show based on a fantasy series that I really liked has just started its eighth and final season, firmly leaving the books in its dust. My enthusiasm for Game Of Thrones has waned somewhat during its run, and I'm not quite as plugged into the fan community these days, but it remains one of my favorite shows and I'm eagerly looking forward to the remaining episodes.

One small little fan thing I did participate in was the /r/gameofthrones pool. The question this asks is "Who do you want to win the Iron Throne?" Notably, it did not ask who you think will win. There are a lot of names I like on there, but only one honest answer for me: Lyanna Mormont. As incredibly unlikely as it would be, it would be awesome to end the series with her in charge. 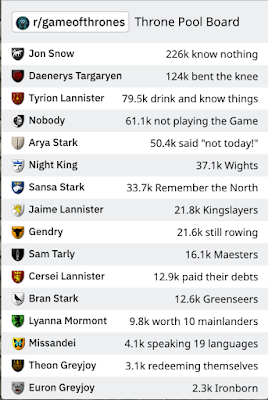 The question of who will win is a lot harder, and honestly I don't have great confidence in any particular theory. So here is my personal ranking of what I view as the most-likely to least-likely outcome of the show.

A few other names that aren't on the list and may be worth considering:
END SPOILERS

Pretty crazy to think of all this speculation building up and then ending in just a few months. I'll be gone on vacation when the series finale drops and am already wondering how I can remain unspoiled until I safely return.
Posted by Christopher Charles Horatio Xavier King III, Esq. at 7:06 PM