The other book I read during my vacation was A Moveable Feast. As with Death Comes for the Archbishop, I've read the author before but not this particular book. Unlike the other Hemingway fiction I've read before, this is more of a memoir, focusing on Hemingway's life in Paris in the post-WWI years. 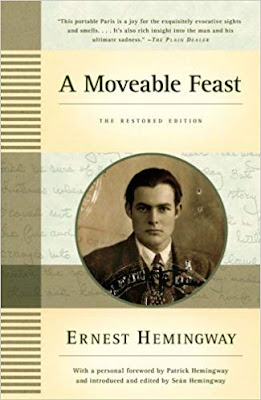 Probably the single most surprising thing to be about this book is just how gossipy it is. He writes a lot about the other famous expats he knew in the city, like James Joyce and Scott Fitzgerald and Gertrude Stein. One early chapter recounts a lengthy conversation between him and Stein wherein she addresses his homophobia, including a run-down of various homosexual writers and what they think of each. Stein herself has some rather shocking opinions on the relative merits of lesbian encounters versus gay encounters.

Stein recurs in multiple chapters, and you get a sense for the role she played as a locus of literary life in the city: she knows many people and meets with them and spreads her opinions. As presented by Hemingway, she and many other real-life people come across as likeable but flawed. He ultimately comes down on her for being overly obsessed with her own career, noting that she would praise people who supported her and disdain those who did not, regardless of the quality of their own work. Over the course of the book it becomes clear that Hemingway values skill above all else: he's willing to forgive all sorts of slights and eccentricities if someone is (in his view) a very good writer, and he will cruelly attack even people who are kind to him if he dislikes their work. Hemingway seems to view this as a noble and good way to live life, and as presented in the book it feels more honest, but... I dunno. Personally, I'd rather spend my time with people who are personally fun and nice, and not judge people primarily by their output. Maybe that's why I'm not a famous author!

The most amazing section of the book recounts his friendship with Scott Fitzgerald. These passages are really, really funny: Fitzgerald himself is a charming but helpless man, and the scenarios they get into are bizarre comedies. A lot of the humor revolves around automobiles. Fitzgerald is convinced that cars don't need oil, and that all the French mechanics who are desperately trying to get him to add oil to his car are all trying to cheat him. He has bought a nice Peugeot, but Zelda convinced him to remove the top, and so every time it starts to rain he needs to pull over and park it somewhere dry. On their epic road trip, he and Hemingway thus end up downing bottle after bottle of wine while waiting for the rain to clear, then continue their journey, only to have it start to rain again an hour later and repeat the process. Hemingway also points out his own foibles, noting in retrospect his ridiculous belief that the best way to handle Fitzgerald's alcoholism was to serve him white wine, rather than abstain from alcohol altogether. There's a sadness that hangs over these sections of the book, and you can sense the larger tragedy of Scott and Zelda's lives, but sentence by sentence it can be really funny. After finishing this, I'm now curious to read The Crack-Up and see things from Scott's perspective.

The edition of the book I read is apparently a bit different from what was originally published. The initial book was never finished and didn't have a title, and was posthumously published by Hemingway's final wife. His heirs later re-examined Hemingway's last edits and work on the book and came out with this new version. Based on the introduction, it sounds like it's a bit kinder to Scott and has a different focus on Ernest's relationship with his first wife Hadley. Some chapters and passages have been cut entirely, which at first glance seems like the opposite of what you would want from an updated edition, but do reflect the last guidance we have from Hemingway. This seems very appropriate for this particular author; this isn't a book about writing, but he does write about writing in it, especially in the later chapters, and he continually emphasizes just how important cutting is. In Hemingway's opinion, the quality of a novel can be judged by the quality of the content you cut from it. If you're cutting out very good stuff, then it's going to be a very good book. Because of this, the subtractions do seem like a positive addition to the originally-published manuscript.

Of course, that also means there's a lot of stuff that I'd like to know more about. I'm particularly curious about "The Rich," who make a late and sinister entry in the book, ruining the skiing refuge of the Hemingways and somehow associated with, though not responsible for, the dissolving of his first marriage. There are a lot of specific things that I'm sure I could find out through Wikipedia, but stuff like that is probably lost forever.

Overall, this book didn't resonate with my surroundings in the same way Death Comes for the Archbishop did - cosmopolitan Paris isn't exactly the same as wilderness in the Colorado Plateau. But it was fascinating in its own right, humanizing many of the literary giants from my high-school English classes and making them relatable: poor, happy, passionate people looking for love and trying to create something good.
Posted by Christopher Charles Horatio Xavier King III, Esq. at 6:06 PM