I'd initially thought that I'd take my time on my way to Moab, maybe do some shopping or sightseeing that night, and then hit Arches the next day. However, I noticed on the Arches web site that the Park Service recommended arriving before 9AM or after 2PM in order to avoid the most crowds. So, I decided that I'd head directly to the park as soon as I arrived.

I'm glad that I did! I was a bit stunned at the sheer volume of cars flowing out of the park around 4pm as I and a handful of other cars made our way in. There were definitely more people there than at Great Basin, but it felt relatively quiet and peaceful in the late afternoon and early evening. 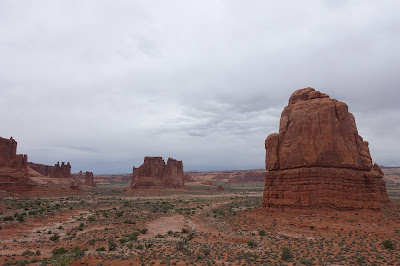 As I would later realize, Arches is probably the most car-centric of the national parks I visited. You really *need* a car there, as the park is designed for you to drive to various viewpoints and trailheads, all of which are quite far apart. Fortunately, at least at the time I was there there were a reasonable number of parking spots, but I can imagine it being frustrating to visit there when the park is at peak capacity.

The morning's snow in Nevada had followed me to Utah in the form of rain, which I later learned is rather rare. Arches has a very distinctive and awesome set of rock structures, which have been formed over millennia thanks to the very limited rain the area receives: there's enough to provide some erosion, but it proceeds in very slow motion, thus producing bizarre constructions like Balanced Rock and Delicate Arch that don't seem like they should exist. 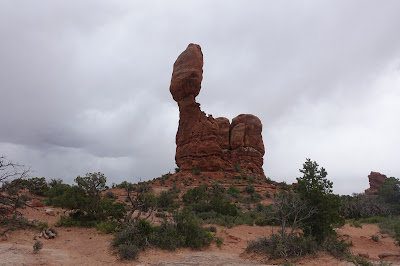 It definitely wasn't torrential, though. I had overcast skies for most of the afternoon and a few showers in the early evening, but much better visibility than I'd had in Great Basin. I decided that I'd spend as much daylight as I could visiting the major viewpoints and walking the shorter trails, and spend the following day on the major Devil's Garden loop. My visit started on a high point with Park Avenue, a short but highly scenic trail that starts with a smooth, paved, accessible pathway, then descends into a wide rock crevasse between massive stone walls. You can see how the area gets its name, as it feels much like walking down a metropolitan street and looking up at the massive skyscrapers on either side.

I was also reminded again of a truism that would prove itself throughout my trip: in any park, as soon as you start walking on any trail, the number of people drops off precipitously. There had been a fair number of people clustering around the parking lot, looking up at the cool structures, but take just a few steps onto the trail and you feel like you have the park to yourself.

I took my time enjoying the scenery and feeling humbled by the massive size of my surroundings, then walked back to my car and continued on my way. There was at least a little walking at nearly every site, like Balanced Rock, which isn't really a full trail but does take longer than you might expect to walk around. The most famous object in Arches are the, uh, arches, and you can see an awful lot of them: huge ones, small ones, ones flush with the ground, ones suspended in the air, double arches side by side, double arches front and back. And in addition to the arches you had many other cool and weird rocky monoliths, pillars and fins and fingers and other things. As I wandered the landscape surrounded by these otherworldly protrusions, I started to feel like Spaceman Spiff, crash-landed on yet another alien planet. 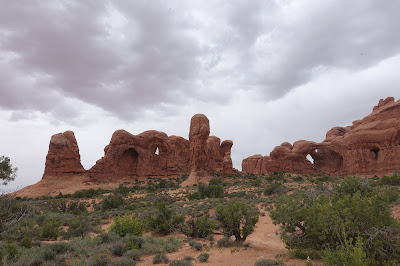 Daylight was starting to fade and the rain was coming down harder, so I wrapped up my day after a visit to The Windows on the east side of the park, followed by a brief visit to The Garden of Eden, which probably would have been more impressive in better visibility. I easily exited the park and headed towards the AirBnB I was staying at. It was a small cottage on the south end of town, on the opposite side of Arches, but Moab is small and navigable enough that it didn't take me long to reach it. The cottage was nice and private, with a good kitchen, and I enjoyed a good domestic night. 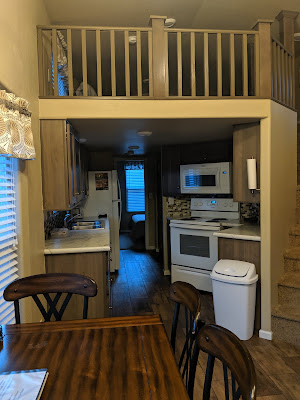 I got into a really good sleep rhythm on this trip: I'd wear myself out hiking during the day, get tired as the sun went down, sleep restfully, and then wake myself up as the sun rose. That meant a relatively early start to my next day, and I rolled back up to the Arches park entrance a little before 7AM. The line the prior day had been short, with maybe 1-2 cars in front of me; today there was no line whatsoever, and in fact the entrance kiosk was unstaffed, with a note to pay for entry at the visitor's center. I already had my America The Beautiful park pass, so I just pressed onward into the park.

As a side note: The major national parks are open 24 hours a day, 7 days a week, though some roads may occasionally be closed due to snow or natural disasters. However, they aren't necessarily staffed that full time, and whenever I showed up early in the morning I was able to go right in. I strongly suspect that the parks don't actively check for proof of payment once you're inside, so it seems like people could probably bypass the entrance fee by entering early - but don't do that, parks are awesome & can use our support!

Anyways, I'd noted a few points I wanted to visit this morning, like Panorama Point; the lighting was much better this morning, and visibility was better as well, so I could better appreciate the landscapes. The previous day had felt peaceful, but this one felt even more quiet, with almost no cars in any of the lots I visited. 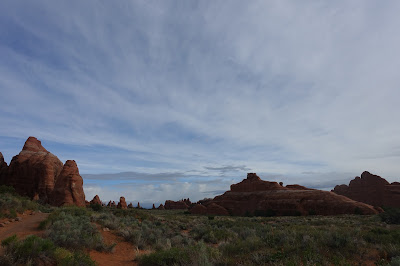 My main hike of the day was the Devil's Loop Trail, a more challenging hiking path in the northwest of the park. There are a bunch of potential hikes to do here, but if you string them all together, you come up with this big loop with several spurs that take you to something like seven distinct arches, as well as a few other interesting structures. I kind of chucked as I looked at the names. When you visit Arches, all the names of the rock formations near the entrance have innocuous names, like "The Three Gossips!" and "The Windows!". As you move deeper in, the names gradually grow more and more sinister, until near the end where you're visiting "DARK ANGEL" and "FIERY FURNACE" and "DEVIL'S GARDEN". 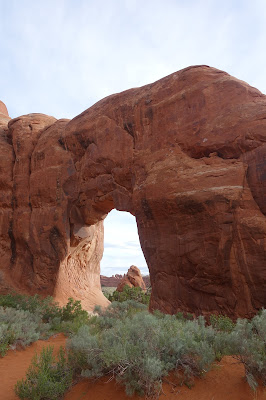 This loop starts out innocuously enough, with a nice and well-defined packed-dirt trail. There are some short spurs out to arches - I was continually impressed by how varied every arch in the park seemed, with huge variations in scale, shape, the surrounding rock and overall setting. The "easy" part of the trail terminates at Landscape Arch, which I think was the largest arch I saw, certainly the largest freestanding one. From here, the route got more challenging and fun: leaving the path, you walk up steep rock slopes to a more cairn-based trail. 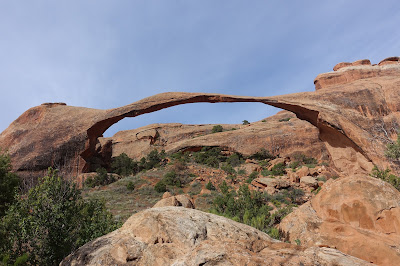 There are a LOT of arches along this loop. I think my single favorite was Partition Arch, a really pretty one hidden at the end of a longish ridge. This is sort of a double arch, with a very large central opening and a smaller window off to one side, and it functions as a beautiful window overlooking the park. 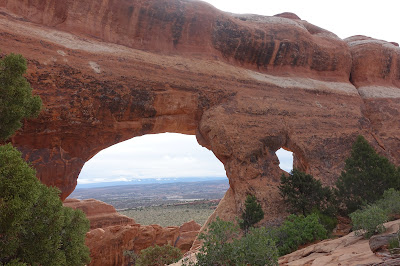 There's a fair amount of exposure along the way, with sheer drop-offs from tall cliffs, and some parts where you have to use your hands and arms to proceed. The hike eventually leads you to Double O arch, which, yes, is a double arch and a very cool one. I took a longish spur from here to Dark Angel, which isn't an arch but is a really cool monolith-looking pillar standard guard at the western edge of the park, and enjoyed a tasty lunch under its shadow. 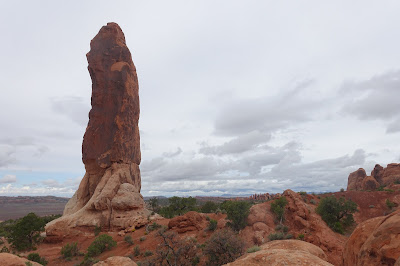 On the way back, I opted for the Primitive Trail, which transforms the Devil's Garden from a trail to a loop. I chuckled at the sign warning that hiking was difficult beyond this point - it hadn't exactly been trivial up until then! For the most part the primitive trail is very reasonable, but there was one part where you need to scale down a nearly-sheer cliff with just a few inch-wide footholds. It ended up not being that bad, but there was a relatively long line of people waiting to descend or ascend, including some folks who were wearing Crocs or other not-great footwear.

Oh, yeah, I guess I haven't really written about my gear yet! For the most part it's the same setup that I've been using for over a decade, with a few small additions that I'll mention in-line as relevant. Here, I'll note that I did buy actual boots for this hike - not, like, mid-calf boots or anything, but ones that come up above my ankles and have some lugs on the sole. I usually prefer simpler hiking shoes for my hikes in California; they're lighter-weight and have more freedom of movement. But my pre-trip research had strongly suggested getting proper boots for desert hiking, and I'm really glad that I did. The greater traction is invaluable on slickrock, even for level hikes and particularly on steep slopes. The higher profile helps guard against scree entering your boot or thorns scratching your ankles. I'm still ambivalent on whether "ankle support" is a positive or a negative, but I didn't run into any problems from having a stiffer cushion around my ankles.

Anyways! The Primitive Trail doesn't hit as many arches as the main Devil's Garden, but the trail itself is really interesting, and the views are all new and different. There is one more arch, the appropriately named Private Arch, along another spur. The final leg of the Primitive Trail is actually one of the easiest parts of the whole loop, with a nice and level stroll through stiff grass. 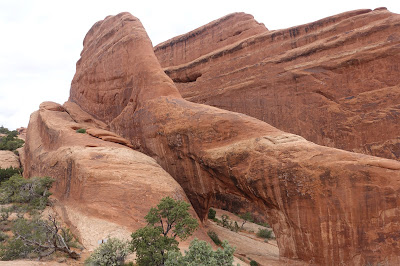 The parking lot was PACKED by the time I finished, and I got a taste of what Arches can be during peak hours. I wasn't quite done hiking yet, so I stopped by Delicate Arch for a final trip, then called it and headed back to the AirBnB. That night I pulled together all of my backpacking gear and tightly packed for my next destination: Canyonlands!
Posted by Christopher Charles Horatio Xavier King III, Esq. at 8:21 PM