I read two novels while on vacation. I'd planned on bringing some from home, but none of my library holds arrived in time, and I failed to visit any bookstores out here, so I ended up visiting the Back of Beyond bookstore in Moab. It was a really good spot, larger than I expected, with a great collection of new and used books. I found two used paperbacks for pretty cheap, perfect for tossing into a backpack where they were likely to get beat up and/or damp, and also grabbed some really pretty post cards. 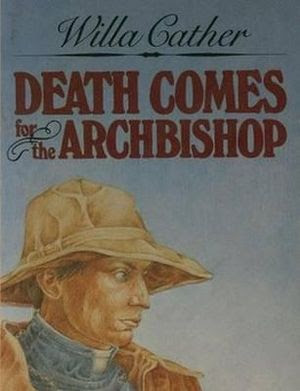 Both of the books came from the "Classics" section, and the first I finished was Death Comes for the Archbishop by Willa Cather. I think I might have read My Antonia at some point in high school, and I'm pretty sure I've read some of her short stories, so she seemed like a good candidate to read more of. I'd heard the title before but had absolutely no idea what it was about; in my mind I'd vaguely assumed it referred to the assassination of Thomas Beckett. It turns out it's much more contemporary than that, and it proved to be the perfect companion for my first visit to the Southwest.

The book is set in nineteenth-century America, and focuses on the efforts of two French priests to establish and strengthen a new Catholic diocese in the Southwest. America has seized this territory from Mexico, and as the new country continues to expand into it this will be an important area of influence.

We learn very early on that the historical situation here has been complex and turbulent. This area has been Catholicized before, during the original Spanish conquest of the New World, when Spanish Padres initially established missions and converted the native tribes, through persuasion or force. In the centuries since then, though, there had been a massive and bloody uprising of the indigenous people, and all of the foreign priests had been killed. There's now a situation where many families have been maintaining their Christian traditions, but they have no priests to hear confession or churches to visit, and are usually illiterate as well, so many people in the Church hierarchy are eager to bring them back into the fold.

At a more political level, there are broadly three sorts of people in the area. The native Americans have lived here by far the longest, and have their own religious traditions and culture, which can seem baffling to others. There are the Mexicans, who controlled the region until recently and still make up most of the population; they are usually nominally Catholic, although the level of observance and devotion can vary significantly. And there are the anglo Americans, who are a minority, but are extremely active, especially the Yankee traders coming to buy and sell goods and the military scouts seeking to map this frontier.

In contrast, our protagonists are outsiders, Frenchmen by birth and Ohioans by recent assignment. Father Latour is scholarly and thoughtful, a man who keeps his eye on the big picture and tries to move towards the ideal outcome. He can be ambitious, but his ambitions are always on behalf of the Church, or at least appear so. His companion is Father Vaillant, a more down-to-earth man of strong personal faith and passions; unlike Latour, who is very constant over the years, Vaillant can be much more excitable, pursuing one goal and then another, always most interested in whatever he has most recently heard. Latour seems to be the superior of the two men: better looking, more intelligent, wiser. But by the end of the book I'd come to like Vaillant more; he's deeply genuine and selfless, pouring all of himself into his work, and happily works alongside others as equals, whereas Latour might be more admired but tends to be more cerebral and aloof.

I'm pretty sure that Cather was Catholic, and she shows many instances of the positive aspects of faith: securing justice for a wronged woman, or peacefully resolving disputes, or producing a beautiful building. But it's also filled with examples of wicked priests who abused their position, and they are probably the main antagonists of the novel. This corner of the New World is far removed from the watchful eye of the Vatican, and priests often run their parishes as their own fiefdoms: in extreme examples, they extract slave labor from the natives, collect heavy tithes from the villagers, charge exorbitant fees to perform sacraments like baptism or marriage, and openly father children with multiple women. While Latour's official purpose is to establish a new diocese, his real goal is to rein in this terrible behavior, and he uses every tool to try and do so: persuasion, forceful diplomacy, threats, and, eventually, excommunication.

It's impossible now to read a book about the clergy and not think about the rampant sexual abuse within the church. I was reminded of this in a roundabout way, during one particularly affecting scene where Latour meets a native woman who has been enslaved by a wealthy Protestant family. They left Georgia when they were unable to produce documents proving that they "owned" her, and now prevent her from socializing with anyone lest she escape. Anyways, she was raised Catholic but hasn't attended Mass for decades, and one night she sneaks out to visit the church but finds it locked. Latour lets her in and speaks with her, giving her physical comfort (lending his coat) and spiritual comfort. She's utterly terrified of being found out but derives great solace from his words. He tries to give her his coat, but she reacts in horror, knowing she will be badly abused by her mistress. So instead he gives her... hm, I don't remember, I think maybe a small crucifix or picture or something, that she had admired. She tries to refuse it, and he admonishes her, saying something like "Please do as your priest asks and keep it." So she does, and treasures it.

And... it's interesting. That whole kind of paternalistic sense of "I have your best interests at heart, and when I ask you to do something, please do it." This book shows a very positive version of what that can look like, when it gives us permission to ignore our personal fears or insecurities and do what's best for us. But, of course, it's that very same attitude or orientation that has been abused for a very long time as priests and others in position of authority take advantage of their positions and the conditioning of their flock to gratify themselves and hurt others. Ultimately, is it worth salvaging this by getting rid of the bad priests and making sure that only good men (and, please oh please, women) fill that role? Or is that role itself improper and/or dangerous, would we be better off getting rid of it and training people to care for themselves? Of course, as someone who grew up Protestant I lean towards the latter idea of direct intercession, but reading books like this makes me see at least some value that may be missed.

The overall structure of the book is interesting and discursive; you're generally following Latour, Vaillant and the growing Church, but there are long digressions where people tell stories from the old Missions or about events elsewhere in the world. It's interesting how little mention the Civil War gets, although it's probably true that New Mexico saw very little of that conflict. There's a lot more attention paid to Native Americans; this story reminded me slightly of the novel Silence and the overall idea that Western conceptions of Christianity can't be directly transferred to other cultures. Some natives are, understandably, very hostile towards the Church based on their past actions; others participate in the church, but bring their own culture with them while they do so, making a sort of syncretic faith. Both protagonists look very fondly at the natives, who come off much better than the Americans do, but they also seem skeptical that their faith will truly set root here. Near the very end of the novel, Latour is cheered by the news that the federal government has returned the Navajo lands to the tribe, viewing it as one of the two great injustices righted in his lifetime, together with the abolition of slavery.

I definitely perked up at that, as I'd spent a fair amount of time in the Navajo Nation on this trip and had seen and read a lot about the Navajo in my various parks. Even though I never made it to New Mexico during my vacation, so much of the physical description in this book lined up with my own experiences: the red rocks, the blue sky, the steep canyons, the long expanse of desert, the precious water, the high mesas. Early in the book I was somewhat bemused at the story of an earlier priest who had successfully navigated between two canyons and was nominated for canonization. "What's so special about that?" I wondered. "You walk down one side, you walk back up the other: boom, you've navigated a canyon. How is that a miracle?" My attitude changed after I finished my Canyonlands hike, descending into and ascending from Lost Spring Canyon, Elephant Canyon, Chesler Park and The Joint. "Phew, that guy found a way to navigate a canyon?! That's amazing! They should make him the pope!!"

I'm sure I would have enjoyed this book in any setting: it's well-written, personal but political, humanistic, thought-provoking. But I'm really glad that I got to read it now, on this particular trip, reading about these men viewing the landscape for the first time, just as I was doing the same. It's nice to read a fairly positive portrayal of religion that doesn't minimize the harm it has caused, and see the profound ways it can reach people's hearts.
Posted by Christopher Charles Horatio Xavier King III, Esq. at 8:05 PM