I had a long day of driving ahead of me so I got everything lined up on Friday after work: all bags packed, water bottles filled, snacks prepared. I had gotten a decent (not amazing) deal on a full-size sedan from Enterprise Rent-a-Car at their SFO location; using BART and AirTrain, I got there on foot and picked up my car. The woman offered me either a 2019 Nissan Altima or a 2019 Ford hybrid. I somewhat randomly chose the Altima, and almost immediately began second-guessing myself. I was going to be driving a lot, racking up a lot of mileage; why didn't I choose the more fuel-efficient hybrid over the gas-guzzling standard car? That would add up to a lot over my weeks of long driving!

It wasn't until several DAYS later that I belatedly realized ".... wait a minute! There aren't going to be plug-in charging ports at national park trailheads! The hybrid would just be eating gas anyways after the initial charge expires, so I'd just be hauling around a heavy dead lithium-ion battery for thousands of miles!" Retrospective justification, huzzah!

My destination for the night: Stargazer Inn in Baker, Nevada. I had stumbled across its web page a few months earlier when sketching out my itinerary; it looked like a really small and personal setup, with the owner respectfully requesting people to check in by 8pm. That gave me a bit of a deadline to try and reach. I'd initially hoped to be on the road by 9, but was all loaded and ready to go shortly after 8.

I'd seen two possible routes into Nevada: The preferred way had me on I-80 all the way into Reno, before dropping down to US-50 and taking that the rest of the way east. That was fastest, but is the same route I've driven once or twice before. I was more intrigued by a route that kept me on US-50 all the way through the Sierras, bypassing Reno. On the day of my trip, though, Google refused to route me the second way, so I reluctantly decided to follow its path.

But! As I soon discovered, my rental car had its own in-dash GPS and navigation. I decided to follow that instead and save my phone's battery power. It started off with a more easterly route than Google, taking I-80 across the bridge, then I-580, 24, and I-680 back up to I-80, rather than just staying on I-80 all the way through Vallejo. Once on 80 in Sacramento, I almost cheered when I saw it putting me on US-50 after all. It was finally happening!

It feels pretty strange that I've never been to Lake Tahoe in all the years I've been here; it's probably the most popular vacation destination for most of my friends, whether they enjoy skiing or hiking or cycling. I'd heard enough to know that getting to Lake Tahoe can be a challenge: it's a relatively narrow highway without many other options, so if there is an accident or bad weather the flow of traffic can stop altogether. There was a chance of precipitation on this day, and it was below freezing at the highest point of the pass, so I was slightly concerned that a snowstorm could turn my slightly-slower scenic route route into a completely-stopped traffic jam.

Fortunately, the day stayed clear, and I enjoyed the very light traffic as I sped east from Sacramento and up into the mountains. I paused for a brief scenic stop once I finally crested the saddle and saw Tahoe itself. I'm a huge sucker for alpine lakes, and Tahoe is the most impressive one I've seen. 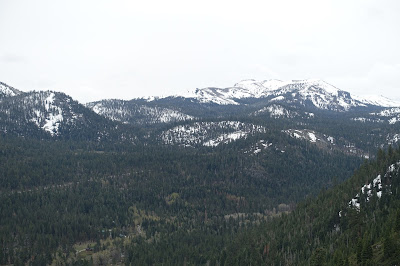 I bypassed much of South Lake Tahoe, but saw enough to be a little underwhelmed by its touristy-glitzy facade. I did want to spend time by the actual lake, though, so I ducked into a state park on the Nevada side and had my first lengthy break of my drive, munching on a sandwich and eating some fruit on the chilly but beautiful shore.

Then it was back into my car and further east! I descended into Carson City and then pressed on into Nevada. I'd been looking forward to this stretch of US-50, which is known as The Loneliest Road in America. The first part of the state was barren, with long stretches of featureless scrubland. As advertised, this stretch is very sparsely populated, with drives of over an hour between any sign of settlement and almost no traffic. The landscape gradually gets more interesting and impressive as you press further into the state, with hills rising up and eventually some neat passes under large peaks, all still in relative isolation.

I'd brought along a soundtrack to keep me occupied, a variety of offline tunes from Spotify and Bandcamp. and it helped me stay focused through the many, many, many hours of driving. At last I pulled into Baker, right around 7pm, with nearly an hour to spare. I found the inn, got checked in, and enjoyed a beer and a large Caesar salad at the adjacent Kerouac's Restaurant.

The next day I checked out early and headed into Great Basin National Park, which is immediately adjacent to the town. Unlike every other national park I visited, this one doesn't have any gates or entry fees. When planning my itinerary I'd been thinking I'd do some of the longer loop hikes near the top of Wheeler Peak; however, I'd failed to anticipate the long duration of winter snow. Much like Tioga Pass on the way to Tuolumne Meadows in Yosemite, the road to Wheeler Peak can remain closed well into June, and that was true this year due to the heavy snowfall. Which hadn't stopped yet! I looked in bemusement at the snow gently falling down around me. This wasn't how I expected my trip into the desert to begin, but it was cool to see. 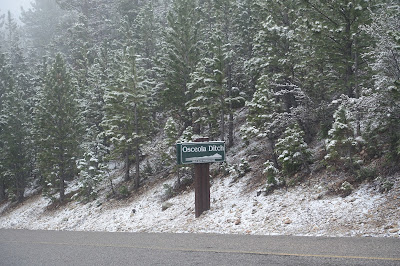 The main attraction of Great Basin Park is Lehman Caves, a large set of caverns. I had vague memories of visiting Mammoth Cave as a kid, and more recently ducking into Luxmore Caves on the Kepler Track in New Zealand, and thought that would be cool. There are a very limited number of spots available for the ranger-led tours, and unfortunately I had failed to reserve one in time. Instead, I ended up doing some mid-level hikes on Wheeler. I started off with a hike into the Osceola Ditch, near the point where the road up the mountain closed. This was a fun, relatively flat trek through the woods; I turned back once the trail devolved into a muddy rut from the actively-melting snow. 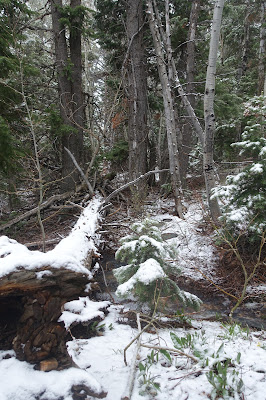 I then headed back down the mountain and hiked up Lehman Creek Trail. This was also fun, as I started in the rain, and gradually gained enough elevation to have that change into snow. Along the way I saw the titular creek and a whole lot of snow - it wasn't too deep or thick, but nicely covered the trees and the ground. I'd time-boxed this hike, and once I'd made it far enough up, I turned around to come down again; I think that with enough time you could probably make it all the way up to the peak, despite the closure, and I'm curious if any hikers would actually camp up there to access those trails in winter. 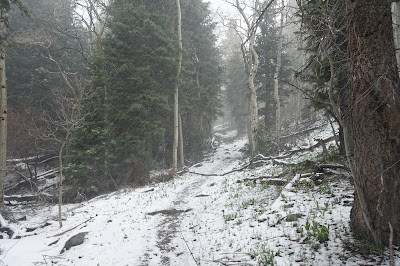 But I had a bigger agenda ahead: after driving through the entire width of California and Nevada yesterday, I now merely had to drive the entire width of Utah to arrive at my next destination: Arches National Park!
Posted by Christopher Charles Horatio Xavier King III, Esq. at 7:33 PM