I'm continually revising my impression of Roberto Bolaño. For years I was under the misapprehension that he had only written two novels, The Savage Detectives and 2666, along with a lot of poetry. I thought the books were brilliant and a sort of lost opportunity, that his relatively early death had deprived the world of a long literary career. Much later I belatedly realized that he had actually written quite a lot of prose, it just took a while for it all to be translated into English. Now I'm more impressed at just how varied his books are: there are some common themes connecting them, but their structures are radically different. It kind of feels like he was starting from scratch each time, coming up with a new way of writing and inventing fresh challenges with every book. 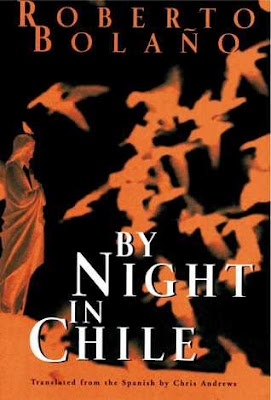 This was further reinforced with By Night in Chile, a relatively slim book with probably the most obvious stylistic choice. The book is 120 pages and a single paragraph long - well, technically one paragraph that's 120 pages and then a second paragraph that's a single sentence. It's written in a stream of consciousness style. The narrator is Father Urrutia, a priest and literary critic on his deathbed, reflecting back on his life. Many years have passed and his memory may be failing, and he'll often admit that he can't remember certain details: who he was talking with on a certain day, or whether one incident preceded or followed another. He generally advances the story chronologically, but periodically jumps back to provide more context or forward to show how something ended, and often will digress to give his opinion on something.

I was strongly reminded of Joyce while reading this, which isn't an association I've made with any of Bolaño's other books.  One interesting difference though, is that with Joyce you generally become fonder of a character as you spend more time with their thoughts, understanding their motivations and thought processes. In By Night In Chile, though, the opposite effect occurs, as Urrutia becomes even less sympathetic as you hear more and more from him.

Urrutia is a mildly pathetic character from early on: he always seems out of place, awkwardly moving around in a large cassock, often tongue-tied. He seems ill-suited for his role; he fawns after people who are more famous than him, and betrays an unease bordering on contempt for common folk. Even they, in turn, seem to look down on him, trying to show respect for his office while not being able to take him quite seriously, accidentally calling him "Son" rather than "Father".

His position in the clergy gives him some standing and amount of respect, but he doesn't appear to have any religious feeling; he opines on culture and society and literature, but never has anything to say about faith or God or virtue. It seems strange that he's a priest at all, but that may have more to do with my unfamiliarity with the culture than anything intrinsic to the story.

Besides the formal structure of the story, this novel also seems unusual in that it's set in Chile. I have a very surface-level understanding of Bolaño's biography, but from what I know, he was a socialist Chilean who was imprisoned by the Pinochet regime and lived in exile for the rest of his life after his release. All of his previous novels that I've read have been set in other areas where Bolaño spent significant time: Mexico, Spain, other Latin American countries; Nazi Literature In The Americas may have had a chapter or two in Chile, but overall I think this is the first thing of his I've read that focuses on the country, which is an interesting lacuna in his overall bibliography.

Anyways, that's something that sort of touched off my radar that we aren't meant to be too enamored of Urrutia. Particularly in the later part of the book, it becomes clear that Urrutia sympathizes with the fascist movement that will propel Pinochet into power and support his reign. He doesn't seem especially ideological, but is most comfortable moving in those circles.

While I started off this book thinking of Joyce, by the end I was more reminded of Nabokov's Pale Fire, another book where we follow the thoughts of a pretty unlikable person. In particular, there are some really odd incidents and scenes Urrutia recounts that... I mean, this book is fiction, so they totally could have happened within the book, but they seem so odd that I am left wondering if they did happen, even within the text.

I started feeling this way around the time Urrutia meets up with Mr. Etah and Mr. Raef. The cloak-and-dagger recruitment and mission were intriguing, and I was curious if he was being used as a courier or something. But... the mission he goes on is so deeply, deeply weird, basically just traveling to old European cathedrals and observing falcons being used to kill the pigeons who have been pooping on the churches. That's it. I guess he writes some reports. But... why? Who is funding this? What purpose does he serve? Maybe that was part of Mr. Etah's initial conversation in the coffee shop, which Urrutia tuned out. Maybe the junta was somehow testing Urrutia to see if he was amenable to their influence, but again, I fail to see how he could be useful to them.

So, what was going on? I realized much later that the names themselves were suspect: "Etah" is "Hate" spelled backwards, and "Raef" was "Fear" reversed. Those seem like ridiculous, invented names. (I'm now curious what those characters were called in the original Spanish.) If Urrutia is concerned about his legacy and accusations against him, he might be trying to spin together some alibi, giving an innocuous account of his time traveling in Europe to conceal a more sinister mission. Or... much like Charles Kinbote in Pale Fire, maybe he's just imagining this and inventing it all. Though he does make a point of commenting that he posted his newspaper columns from abroad during this time, so... I just don't know! It's very odd.

It gets even odder, though. Mr. Etah and Mr. Raef reappear after the putsch and recruit Urrutia to instruct Pinochet and his top generals on Marxist theory. Which... what? Why? The idea of this dictator sitting in a classroom, doing assigned reading from this mumbling priest, debating Marx, is just absurd.

I feel like Farewell sort of draws a line under that when Urrutia confesses with him. That scene is a little hard to parse - what exactly is Farewell thinking? - but to me, it sounded like he was extremely skeptical and suspicious of Urrutia. Taken from the outside, though, what happens is that Urrutia makes a ridiculous claim, Farewell challenges him to provide details, Urrutia cannot, Farewell asks him again, Urrutia cannot, Farewell presses him more, then all of a sudden Urrutia gives this big and detailed story. Which, maybe you can say that Urrutia was just nervous or whatever, but to me it seems like he was lying: stalling for time, then coming up with a story.

Which, if it's true, is pathetic, but maybe in a weird way kind of endearing? Like, you get the sense that Urrutia is a failed artist: he's a critic who wants to be recognized but cannot produce great work himself. But he is (maybe) telling stories here, inventing something out of his life. It's self-aggrandizing, sure, making himself out to be connected to important people. But it's still a form of artistic creation, which, at the absolute minimum, is better than actually supporting fascism.

So, yeah. I'm left with a lot of questions - I suspect there are a lot of things in there that I may have overlooked, so I'll likely do some additional reading and see if there are theories about What It All Means. Then again, it would be very much in keeping with Bolaño's corpus for there to be ambiguity left in. With all the variations in his style and settings and stories, I feel like the most constant thing in his work is an absence, a sort of unnamed and unseen presence that lurks at the heart of his novels, and that might be the case here as well. I'm not sure if I'll ever know exactly who Father Urrutia was, but I won't forget him soon.
Posted by Christopher Charles Horatio Xavier King III, Esq. at 8:36 PM