I've completed yet another fun vacation! I seem to have settled into more or less a once-every-two-years rhythm for these; I'd like to do more, but I'm always very happy when the time rolls around. I increasingly treasure these trips, not just for the opportunity to go somewhere semi-exotic and see natural beauty, but also to completely unplug from the digital world in which I'm constantly immersed. It takes a few days, but I gradually stop compulsively checking for new text messages, new emails, new Reddit posts, and just spend my daylight hours focused on the world around me, and my nighttime hours sleeping soundly.

For this particular trip, I fulfilled a long-deferred dream of traveling through the American Southwest, one part of the country I've never seen before. I'll be completely honest: a big part of my inspiration came from playing Highway Blossoms, which compellingly portrayed the stark beauty and awesome landscape of this arid land. I was also attracted by the prospect of adding desert backpacking to my repertoire, stretching myself in a new direction.

Unlike my previous New Zealand wrap-up mega-post, I figured I'd write a short series about the trip. This initial one will go over my planning and preparation. I'm a big planner and a big nerd, so I enjoy the planning phase nearly as much as actually doing the thing. I'll focus on the stuff that wasn't immediately obvious to me or struck my interest, as there are tons of resources out there for basic travel information.

My main goal for the trip was to hike as much as possible. I quickly focused on the Grand Canyon as the centerpiece of my trip: it's the most famous destination in the region, and has the least availability, with access to the inner canyon limited by the National Park Service. Early on I was attracted to a hike known as The Jewels, a multiday trek along the length of the canyon, roughly halfway below the rim. However, the logistics ultimately turned me off from it. One end of the hike was an accessible trailhead, but the other was at the end of a long and deeply rutted unmaintained dirt road; even if I rented a 4x4 to navigate it, I would still need a way to get *back* to the trailhead, and I couldn't find any major transit options. Or I could hike out and back, but doing the whole trail that way would take well over a week, and I usually try to avoid out-and-back hikes when I have other options.

So I ultimately decided to do something much more mainstream (but still awesome): through-hiking the canyon from the North Rim to the South Rim. This would still require a shuttle, but it's a more popular route and there are established services to provide it. That would mean hiking down 14 miles and 5500 feet to the Colorado River, then 10 miles and 4500 feet up to the rim. 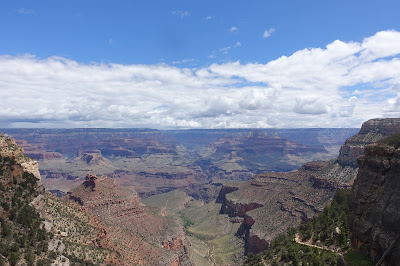 Some insane people through-hike the canyon in a single day, and people who are even *more* insane run it, and the most insane people go rim-to-rim-to-rim in a day. I'm nowhere near that hard-core! I wanted to spend at least a day or two below the rim. I've really enjoyed backpacking trips where I set up a "base camp" and then do day hikes from there, so I decided to shoot for spending two nights at Bright Angel Campground, an established site at the bottom of the canyon.

As you might imagine, there is a LOT of competition for this site: there are just 31 sites plus 2 group sites, and many many people want to be there. The Grand Canyon uses a lottery system, similar to Yosemite, where you submit applications in advance and the park service randomly grants permits until all spots are claimed. I applied for May 16-17, some of the earliest days after the North Rim would open from its annual winter closure. But I marked that I would be available for any two other days.

I applied in... I think early January. Ordinarily they would collect applications for a week or so and then start handing out permits. However, due to the government shutdown, processing was delayed and I didn't hear back until early February. I did not get my desired dates, but was approved for later in the month, May 27-28. However, the approval came with a stern warning: they'd marked my itinerary as "very aggressive" and wanted me to reply with a list of all the gear I was planning to bring as well as a description of all my relevant backpacking experience. I was a bit surprised - I've never been asked for stuff like that before, even when planning trips that I think are more challenging. I gave them what they wanted and received my official permit. Success!

While I'd been waiting for my permit to be processed, I was sketching out the rest of my trip, tentatively planning on taking two full weeks to do a few multiday backpacking trips and intersperse them with shorter day hikes. I always feel some tension between the desire to minimize my travel during vacation so I can do more stuff and/or relax, and maximize travel so I can see a greater variety of things. For this particular trip, I tilted more towards the "travel a lot" end of the spectrum. I liked the idea of doing a Southwest road trip (again: Highway Blossoms!), and since I don't necessarily expect to return to that area soon, I wanted to see a lot of it; if I did do a subsequent trip, I reasoned, I would have a better understanding of what I liked and could focus more on a particular area.

Two other backcountry options were now on my radar. Another fairly famous one is The Narrows, a long walk along a river that cuts through a very narrow slot canyon on its way into Zion National Park. Like the Grand Canyon, this requires either hiking the whole thing in a single day (hard!), or securing one of very few available permits for backpacking sites. Unlike the Grand Canyon, these permits are offered on a first-come-first-served basis, which meant jumping onto the web site at exactly 10AM Mountain time on March 5th. 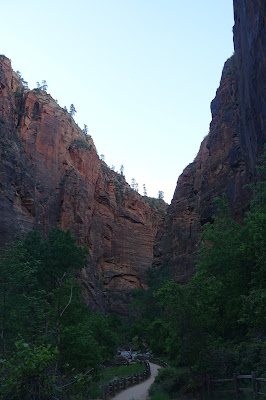 As with the Grand Canyon, I had a target date in mind, and also some preference for specific camp sites (based on my prior research). This turned out to be very stressful! Multiple times I would select a site, fill out the form, then find out that someone had completed it during the 30 seconds it took me to fill. The availability was rapidly winnowing. Finally, at 9:04AM I claimed an opening for Site 9 on May 30th. That was cutting it close to my exit date from the Grand Canyon, and would unfortunately mean cutting out a trip to Bryce, but hiking the Narrows seems like a once-in-a-lifetime opportunity and I wanted to take advantage of the opportunity.

The last major route I had in mind was Canyonlands. I came across a detailed description of a loop trip in The Needles district which sounded great: covering a wide variety of terrain without any repeated trails over several days. Competition for this park isn't quite as intense; by the time my other permits had arrived, some of the designated sites had been claimed, but I was able to find days and sites that worked for me. 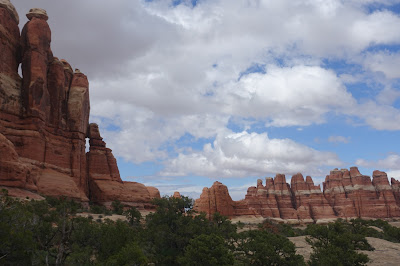 Once those three trips were set, I was able to start filling in the rest of my plan. I live my life through Google Docs, and this trip was no exception: I started a new spreadsheet listing every day of my trip, filled in the spots I'd already locked down, and started gradually populating the remaining cells as I determined the rest of my itinerary. I'd initially imagined starting with the Grand Canyon and then working my way counter-clockwise through the other parks; with how the permits landed, though, the Canyon ended up being in the middle. I mulled over how to arrange transportation: the logical thing would be to fly to Las Vegas and rent a car, but (a) that wouldn't save a whole lot of time over just driving, once I figured in time to get through security, pick up luggage, transfer to the car rental center, etc.; and (b) if I was backpacking, I'd be bringing a *lot* more luggage than I normally take on trips, which would add another set of hassles. I *have* a car, but even though it has relatively few miles on it, I wasn't sure how I felt about putting a 16-year-old vehicle through thousands of consecutive miles in scorching desert heat. I ultimately decided to locally rent a car in SF and use that for my road trip, which did add a decent expense to the budget but gave me a lot of flexibility in my route.

Speaking of which: my initial planning had all assumed I would start around Las Vegas, but once the flight was out of the picture, I started looking at other approaches. Rather than making a circle, I would essentially drive out to the farthest east point to start, and then gradually make my way westward back home, moving north or south along the way. That meant a brutally long drive out to Arches National Park, on the eastern border of Utah, but after that relatively shorter drives from park to park. Looking over possible routes out to Arches, another option appeared to me: the straightest route would pass through a mostly deserted section of Nevada, well south of Reno and north of Vegas, but would put me within a few miles of Great Basin National Park, a far less visited but still well-regarded park just across the border from Utah.

So, after finalizing all of my parks and finding lodging, I finally had my itinerary!

We'll kick off the trip report in my next post!
Posted by Christopher Charles Horatio Xavier King III, Esq. at 5:25 PM