After my long backpacking trip in Canyonlands, I was ready for a change in pace: a bed, a shower, and some nice views that didn't require long walks with a heavy load to appreciate. My next destination was my first real splurge on this trip: a cabin at Monument Valley. This is a park that is often included on tours of the Southwest, but it isn't a national park, or really an American park: it's part of the Navajo Nation, a huge reservation that surrounds the Four Corners of Utah, Arizona, New Mexico and Colorado. Monument Valley is famous as the setting of many classic Western films, especially John Wayne ones, and is beautiful in its own right.

Several decades ago the tribe decided to build The View Hotel perched on the rim of the valley. This was a somewhat fraught choice: much of the reservation lives in extreme poverty, without access to clean running water, and the tribal leaders needed to weigh the benefits of increased resources from tourism against the way it would emphasize inequality. They ultimately built it, but tried to be conscientious about it, for example by not including a wasteful swimming pool. The hotel is a little on the pricey side, but can be a once-in-a-lifetime experience. There's also an adjacent campground and RV park which is considerably more affordable. In recent years, they also built The View Cabins, private dwellings overlooking the same valley. The prices of these are comparable to the hotel rooms, and I really liked the idea of stretching out in my own space, so I'd opted to spring for one of them.

The drive into the valley was cool on its own; the landscape gets more spaced out as you go further south, simpler but more impressive. There's a simple kiosk to enter the park; national park passes aren't accepted, of course, and it's $20 for two-day entry. Many people will enter to do the scenic drive, a long route over a well-maintained dirt road that descends into the valley and leads to many impressive viewpoints. I'd already had enough driving for the trip, though, so instead I spent some time at the main building while waiting for my check-in time. Besides the hotel, it also houses a small museum and a huge trading post. There's an incredible range of types of items and price ranges here, from inexpensive keychains and tchotchkes to artwork and jewelry worth thousands of dollars. I probably spent at least an hour wandering here and checking things out. I'd been thinking of buying a Navajo rug or similar weaving, but unfortunately even the smallest pieces were far outside of my price range. Many of the other handmade crafts were much more affordable, though, so I found a few nice gifts to pick up.

I spent a little time admiring the valley from the observation desk, then headed to the camp to check in. The manager was really friendly and helpful, as were pretty much all of the Navajo I met. Along with my keys, she also gave me a gift certificate for $20 to the trading post (with no minimum purchase), as well as a 10% discount. I think the ultimate goal here is to reimburse guests for the $20 entry fee, and I really appreciated it, although I wished that I had gotten this before my shopping trip! 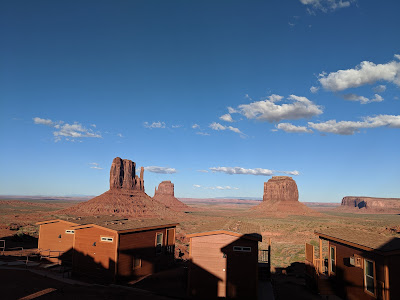 My actual cabin was fantastic: very clean, well-decorated (with a great rug!), and literally cool, with delicious air conditioning. The cabins are separated; they're each fairly close to the ones on either side, but there are privacy panels on the side of each deck, so they feel private. I'd gotten the slightly-cheaper cabins in the rear of the two rows; they're elevated above the ones below, so you still get an unimpeded view of the valley, but if someone specifically wanted to take great photos of the valley directly from their porch, they'd probably be better off with the front row. 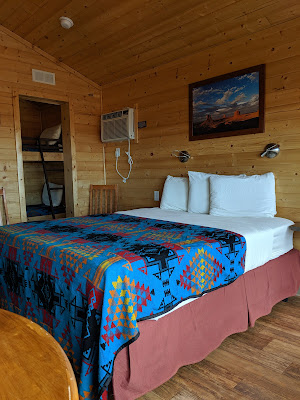 The rest of the day was wonderfully low-key: I cleaned out my pack from Canyonlands and re-packed it for my upcoming Grand Canyon trek, sorted through civilian clothes for the upcoming days, and then spent a long time reading on the porch and watching the colors in the valley shift as dusk descended. It was a perfectly clear night, and as tired as I was I stayed up a bit to watch the stars appear; I was much closer to civilization here than I had been in Canyonlands, but I could see much more of the sky. 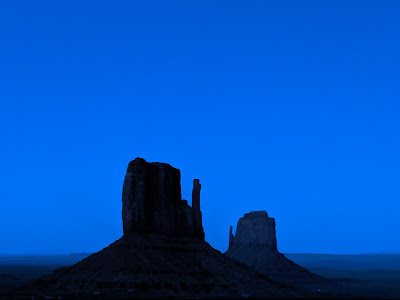 I woke up early-ish the next day. (I can probably stop writing that sentence; I think I woke up with the sunrise pretty much every day of my entire trip.) I enjoyed the sunrise, then headed out for my one hike in Monument Valley, the Wildcat Trail. This is actually the only hiking trail in the valley that visitors can take unaccompanied; everywhere else requires you to be accompanied by a Navajo guide. If I come here again I think it would be really fun to try that; on this particular trip, I was unsure enough about my arrival and departure times, and my overall energy/health levels, that I didn't want to commit to yet another long hike ahead of time. 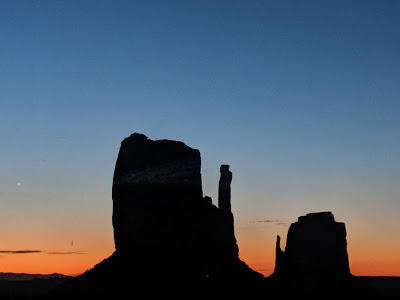 The Wildcat Trail follows a steep descent from the rim into the valley, then makes its way around the West Mitten Butte. I kind of chuckled once I figured out the name: it isn't obvious from every angle, but there's one thick part of the butte, a gap, and then a narrow part, so it does kind of look like a mitten. There's some nice symmetry between this and the East Mitten Butte, nearby in the park but not accessible from this trail. 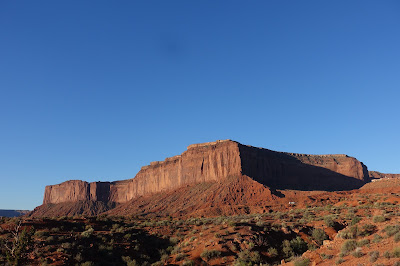 I was a little surprised to find that the Wildcat Trail would be the quietest and most solitary hike I'd taken on the trip so far. I saw one person heading up as I departed, and ran across a family near the rim on my way back, but I basically completed the entire loop without crossing another person. Which felt really surprising, since I knew that there were a ton of people staying at the hotel and cabins and campground, and was expecting a lot of them to follow me down into this beautiful valley in the cool early dawn before the day got too hot; but I think everyone else was content to watch the show from a higher elevation.  I did appreciate the sense of being alone and having this vast landscape all to myself. 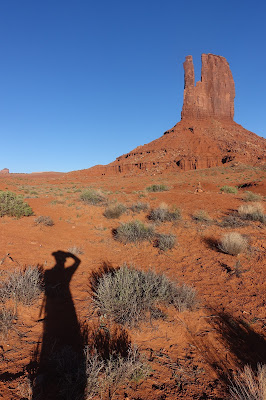 The route around the butte was fairly gentle, with some ascents and several washes to cross but nothing too challenging. I did really like the actual composition of the trail: unlike the routes in Arches and Canyonland, which were marked with cairns and had false trails walled off with fallen branches, the Wildcat Trail is marked with stones along the edges of the trail, more clearly defining the continuous trail rather than a series of short waypoints. I'm sure it's a lot more work to set up and maintain, but I also liked how it looked, and I think it's significantly easier for novice hikers to follow. 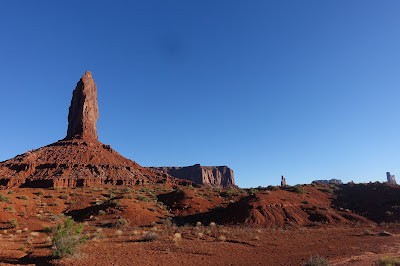 The day was starting to warm up after I finished rounding the butte: the rain had finished for the near future and the desert was returning to its traditional heat. As the head of the trail had warned, the most difficult part was the climb back up the rim: the descent hadn't felt too steep, but I was definitely feeling the grade on the ascent, and I self-switched-back along the wide trail to keep up my desired pace. At last I emerged, took advantage of one last shower and cool drink of water, then checked out and hit the road for my next destination. You might have heard of it: The Grand Canyon.
Posted by Christopher Charles Horatio Xavier King III, Esq. at 5:58 PM