I just wrapped up the sixth book of Charles Stross's Merchant Princes series. I haven't been blogging about intermediate books since the first one; partly because I haven't had a lot to say about them, but more because it's so clearly a single continuous story. At the end, I find I still don't have a ton to say - much less than Fall! - but I'd like to say what I do have. 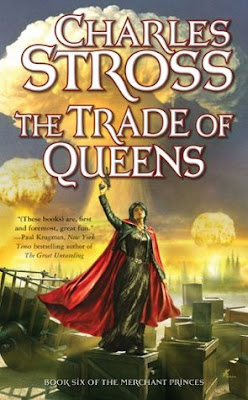 My favorite aspect of this series is just how over-the-top the plotting is. It gets more and more audacious and ridiculous and epic with every book. Very roughly, the progression looks like:
I'm skipping over some stuff, but that's the general thrust! There's just constant escalation and stakes-raising, to a pretty absurd degree, but it keeps things super-interesting.

One of several odd aspects of the series is that Paul Krugman has blurbed the books, appearing on the back cover with glowing praise. It feels a bit odd to have a lefty NYT columnist praising a gonzo speculative fiction book. My favorite parts of the series probably were those that weighed in on economic issues, looking at how different timelines were faring under different political, cultural and business regimes: there's some ongoing discussion of runaway inflation in New Britain, a development trap in the Gruinmarkt, arbitrage of weight and illicit materials via the Postal Service, etc. One of several frustrations I had with the book is how fleetingly these are covered, though. I was particularly disappointed that Miriam's business enterprise, which seemed so interesting and cool, got completely axed; likewise, we get lots of details about New Britain's woes, and some speculation on how to fix it, but nothing is ever done with them.

The series ultimately felt pretty unsatisfying: lots of exciting things are happening, but many plot threads are completely dropped, character arcs unfulfilled, not much really wrapped up. The last book features a kiss between two characters who I guess are in love but who I'd forgotten about; meanwhile, Miriam and Erasmus are just building up some "will they or won't they?" energy that will never be explored. There are all these really interesting doors that get opened during the series, but most of them are left unexplored, with just a pure testosterone burst at the end. Miriam herself feels unfairly sidelined in her own series, losing the cool agency she had and suffering as a powerless victim for multiple books.

The Trade of Queens opens with a note that it is the final entry in this arc. As it stands, I find it hard to recommend. The first few books have likeable characters but the writing can be kind of dodgy; the middle books are pretty wonderful with lots of fun surprises, more believable dialogue, and the pleasure of watching talented people make the most of their situation; the final books ramp up the excitement and stakes considerably, but lose much of the most impressive plot and wind up to an abrupt, arbitrary conclusion. It looks like there is another trilogy coming that follows a new plot in this same world. There's enough about the setting that I like for me to keep an eye on it, but I'll probably read the reviews before committing.

While this didn't end the way I would have liked it to, it does remind me that Stross is a very versatile writer: I've enjoyed all of his other books more than this, and it has been a lot of fun to see him work in another genre and style. I don't plan to return to the Merchant Princes soon, but this does remind me that I should check out some more of his books.