That Game You Like Is Going To Come Back In Style

Things have picked up in Divinity: Original Sin 2 (henceforth DOS2). This is more due to me than the game. I felt a bit pokey at first: playing for a little while, then getting frustrated and overwhelmed by the cruft in the game (the ginormous inventories, encumbrances, crafting, and hard-to-compare equipment: do I want a ring that gives +31 Magical Armor, +2 Warfare and +1 Telekinesis, or one that gives +35 Magic Armor, +1 Warfare, +1 Scoundrel and +1 Bartering?). I'd take a break for a week or so, then dive back in again. By now, though, things are clicking: I'm getting invested in the story, in my companions, and have at least a rudimentary system in place for managing the metric tons of crap the game shovels into my pockets. 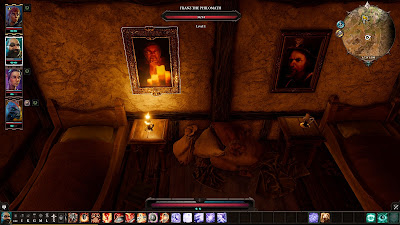 I think I'm still pretty early in the game; I just reached level 13, and it looks like I've uncovered maybe a bit less than half the map for Act 2. Since I've been playing for so long, though, I wanted to capture some in-progress thoughts, focusing on the things I think this game does very well in comparison to other RPGs I've enjoyed. 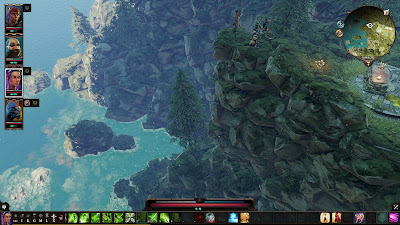 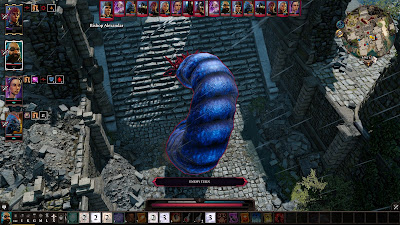 To expand on that final point a little more: one of the coolest things about the DOS series is its encounter design. There are no trash fights: each combat is extremely finely tuned, with a unique setting and enemies and abilities and mechanics. In other RPGs, I dread grinding through combat so I can get to the good story bits. In DOS2, the fights are hands-down my favorite part of the game. 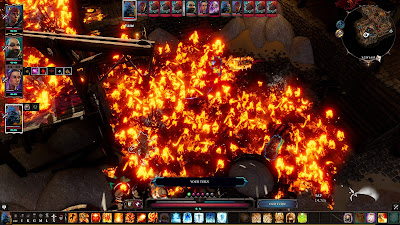 The world design is insanely good, especially when it comes to secrets. There are so many ways to get from Point A to Point B, and it's always worth keeping your eyes open and a high-Wits character in the party so you can find buried treasure, traps, and other unexpected items along the way. 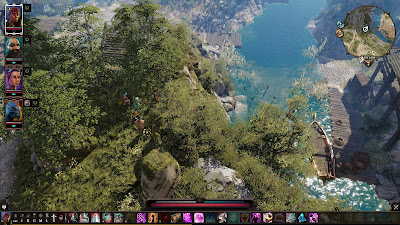 I like the party specialization system. There are no fixed classes, so you can build your party around any concept you like; at the same time, there are limited skill and attribute points available, so you're incentivized to assign specialties.

Speaking of, here's my current party loadout. (I name some characters here, but there's no plot info, hence no spoiler tags.) 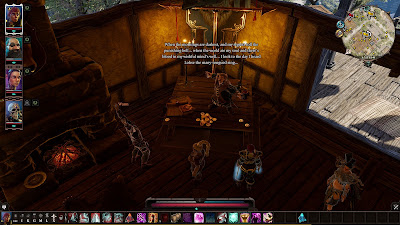 My PC is Lohse. She is a dual-wielding-dagger backstabber. She mostly uses Scoundrel abilities, with a few Necromancer skills to occasionally summon corpses for damage and more bodies on the field. She's almost all oriented towards Finesse, with splashes in Memory and a little Constitution and Wits. (Since she usually backstabs for guaranteed crits, Wits' increased critical chance isn't that useful.) As party leader (but not Leader), she focuses on Persuasion, and stacks some Bartering points as well. She has Pet Pal and some other good talents. For combat, she has a lot of Warfare, Scoundrel, and Dual Wielding.

I think Sebille is canonically supposed to be a dual-wielding dagger rogue, but since that slot is filled I respecced her into an Archer. She's also high in Finesse, and is the main Wits character in my party, currently in the low 20s to spot secrets. She's mostly focused on Huntsman skills, with some Polymorph and one or two Scoundrel. She builds on her Elven advantages to be the Loremaster for the party. She has Huntsman, Warfare, and Ranged combat skills. There are more useful Talents for her than anyone else, including ones to expand her range, recover special arrows, inflict deadly status effects, and so on. 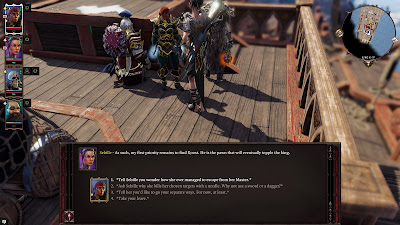 Beast is my tank, wielding a single-handed weapon and a massive shield. I don't think he's ever died, other than falling into lava or deathfog. He focuses on Warfare skills, with some Aerothurge as well; initially I took some damage skills there, but now he just has utility ones like Teleportation and Nether Swap. He has a lot of useful-but-not-crucial talents, like Lucky Charm, Leadership and Retribution, but lately I've been focusing on pushing up his damage. His Constitution is probably higher than it needs to be, so now I'm focusing on his Strength.

Finally, Fane is my jack-of-all-trades spellcaster. He uses Pyrokinetic, Geomancer and Hydrosophist, and I'm starting to squeeze in some Summoner as well. He's almost 50:50 between Intelligence and Memory, so his attacks aren't as powerful as they could be but he has a ton of useful buffs and utility spells available. He uses his bony finger to accomplish Thievery tasks with aplomb. Fane and Sebille are both Stinky, helping them avoid some of their foes' personal attentions in combat; he also has many skills that make his status effects more deadly.

Overall, I'm pretty happy with the setup. The one big problem is that Fane doesn't have any teleportation skills, so I'm mulling maybe having him take over Aero from Beast and giving Beast... I dunno, maybe Hydro or something. Sebille can run out of abilities sometimes, but her basic attack is crazy good already, plus she has special arrows to spare; in any case, I just got her Skin Graft, which should help her with those cooldowns in the future. 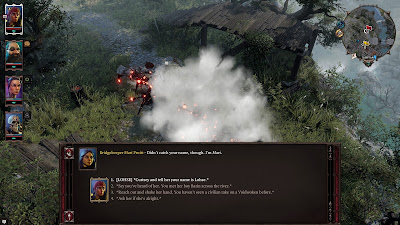 Sebille usually goes first in combat, and, especially with her Flesh Sacrifice and Adrenaline skills, she can often take out an enemy before they get a chance to even move. When I can I try to take out the first enemy in the rotation order, which lets me use two characters back-to-back; if they seem too strong, I'll focus on someone further down the chain so a later party member can take them down before their move. I'm very Physical Damage-heavy in my party, but she will use elemental arrows if facing enemies with weak Magic Armor.

Beast usually dives into the fray and tries to use his CC skills. Even if Sebille didn't kill an enemy, it's very likely that she stripped their Physical Armor, in which case Beast can lay them out flat for the turn. The Taunting skill in this game is garbage so I almost never use that, but I do try to position Beast so he's a more tempting target than my squishier members.

Lohse is another single-target damage-dealer. She can inflict some nasty status effects (Bleeding, Ruptured Tendons, Atrophy), but I've come to realize that she usually kills an enemy in a single turn anyways so there isn't much point. When she has an extra action point left over, she'll CC a low-magic enemy with her Chloroform, or buff the rest of the party with Encourage. She and Beast are the only non-Stinky party members, so she does tend to get banged up in tougher fights; in the long run, I'd like to focus on increasing her Dodge to make her more survivable, and/or give her options to duck into Stealth.

Fane has by far the most abilities on the team, but it's often hard to find stuff for him to do. This is mostly because the rest of my party is so focused on Physical damage, so a lot of the stuff Fane could do would be pointless. That said, he is great in AOE scenarios, especially when enemies have weak Physical Armor and environmental vulnerabilities. In practice, he often ends up buffing deadlier teammates with Haste and Clear Minded, and replenishes Physical and Magical Armor as needed. I'm hoping to build out his Summons some more, which may let him indirectly contribute to this Physical Damage Party I've got going.

Hm, as long as I'm writing this post, let's chat about some

I've escaped Spellhold Fort Joy, and have finished almost all of the Driftwood-area quests, including the long arc to confront Mordus the undead dwarf Sourceror. Perhaps amusingly, I totally failed to find the Blackroot in the basement, so I didn't get my Spirit Vision / Source Vampirism abilities until Level 12. It is kind of cool that the game lets you do so much without it: again, it's a game of soft gates, not hard ones. But what's a little frustrating is that there are a few puzzles that are impossible to solve without Spirit Vision, and the game doesn't make that clear, so I'd still be trying to solve those if I hadn't gone online to search the wiki and found out that I didn't have the ability I needed. 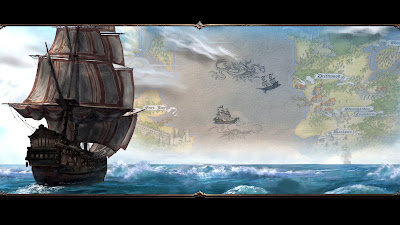 I've earned the "Hero" tag, so I guess I'm mostly doing a "Good Guy" playthrough. I still don't have a totally solid bead yet on my interpretation of Lohse; there are good roleplaying hooks in the dialogue options, especially in the Hall of Echoes when conversing with your demon, but I'm not sure yet whether she's afraid or vengeful or flippant or what. Among my companions, Fane is slightly annoying but bearable (not nearly as offputting as the aristocratic Red Prince was); Beast seems a bit boring in spite of his revolutionary storyline; Sebille has been the most interesting of the four so far, but I think I've gotten less of her story than anyone else's. 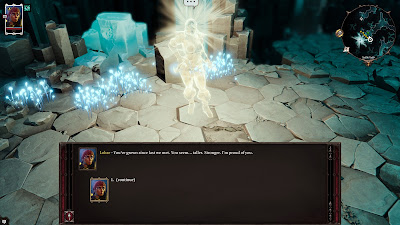 After some early promising flirtation dialogue, and a romantic assignation in a Driftwood inn that proves to be a bad idea, I haven't really seen any romance options in the game. I'm very curious to see if there are any more substantial arcs related to that in the future; so far the game doesn't seem to go as in-depth on companion and NPC relationships as BioWare does, but there's enough there that it wouldn't be surprising to see something more pop up. 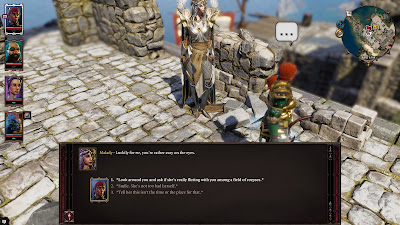 And let's see, for biggish decisions so far, I've: 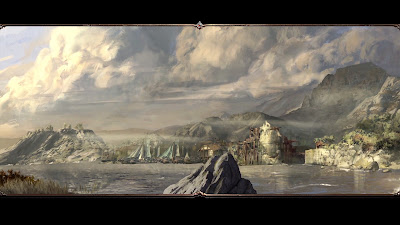 So, yeah, I feel like I've got a nice bit of momentum going in the game now. There isn't much else on the horizon for me game-wise until 2020, when the next big batch of games begin to drop, so I'm hoping I can continue to hold this huge game inside my head and enjoy the rest of my journey.
Posted by Christopher Charles Horatio Xavier King III, Esq. at 7:19 PM