Most of the post-apocalyptic fiction I've consumed, particularly in recent years, features zombies. There are lots of potential apocalypses, of course: nuclear fallout, biological warfare, the rapture. No matter how you get there, the end results look similar: a much smaller remnant of humanity, struggling to survive within the carapace of the much larger race that preceded it. Easy access to the fruits of civilization; no more worrying about whether you can afford something or need permission to enter a building. But the factories are silent, the grid has powered down, and there's no way to replenish those things once they are consumed. 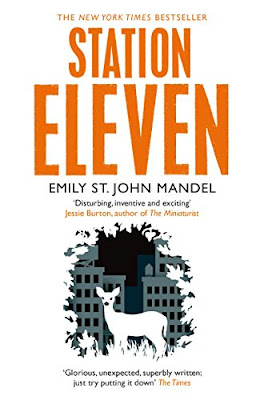 One of the more distinct and haunting post-apocalyptic visions I've seen lately is "Station Eleven," a novel by Emily St. John Mandel that my brother Pat gave me for my birthday. As I was reading it, I found myself making (positive) comparisons to The Walking Dead: that offered a singularly grim view of human nature and famously makes its people more monstrous than the zombies. Station Eleven's future is definitely a challenging one: besides the obvious hardships that come with the collapse of civilization, there are still dangerous people out there, using guns and violence to take what they want from the few remaining survivors. But those are the exception rather than the rule; most of the people we meet are wary but optimistic, working together for common goals, holding grudges against one another that would never boil over into bloodshed.

The structure of the novel is interesting too; in every piece of apocalyptic fiction that I can think of, the action starts during or after the collapse of civilization. Station Eleven, though, alternates between telling what happened in the week leading up to the catastrophe, and what is happening twenty years after. And what we're reading doesn't directly have to do with the Georgian Flu itself; we aren't following officials reading reports of the pandemic and marshaling their doomed response. Instead we follow a quiet, beautiful, mundane story about the aging actor Arthur and the constellation of people around him: ex-wives, estranged friends, adoring fans. What's especially poignant about this is how, as we return again and again from the bleak future, those mundane actions become extraordinarily meaningful. This will be the last time he argues with her, because in a week they'll both be dead. That cup of coffee will be an unimaginable luxury once international shipping breaks down. That uncomfortable airplane ride is an extraordinary achievement of man's ingenuity over the force of gravity.

The future feels somewhat familiar, as we're following a band of survivors who travel the roads on their caravan. But what's beautiful about Station Eleven is that they aren't hard-bitten mercenaries staking out territory or scientists searching for a cure. They are artists: musicians and actors. They travel with their musical instruments and costumes and props and backdrops. We learn that, after the early anarchic bloody years that immediately followed the Georgian Flu outbreak, survivors have started forming small villages and settlements: a roadside motel, a big-box store, a ranch house. The Shakespearean acting company and orchestra travels between these hamlets, putting on plays and performing symphonies. It's strange and wonderful.

I think what I ultimately love about Station Eleven is that it doesn't just answer the "what" and the "how" of surviving the apocalypse, but the "why". One recurring message in this novel, quoting Star Trek, is "Survival is insufficient." There's a primal hunger for art, for stories, for producing and performing for others, for witnessing the art that others create. The nihilistic message of works like The Walking Dead is that we're all ultimately animals, that when you strip away the trappings of civilization you uncover the ugly truth beneath. Station Eleven makes it clear that we're not animals, that we carry within us the spark of beauty and creation, and it's that spark that helps drive us towards creating society, towards building civilization, that gives us this impulse and lends us the motivation to do the hard work it requires.

Part of me almost wishes that The Prophet wasn't in the novel; at first it kind of seemed like he was shoehorned in for the sake of creating a conflict to overcome, which felt more traditional and less exciting than the general sweep of the novel. But by the end of his arc I was pretty happy with it. I'd figured out who The Prophet was after the flashback with Elizabeth and Clark making the emergency landing and realizing that his age lined up to be Arthur's son. I am kind of curious if his time in Israel helped fuel the religious "savior" mentality that eventually took hold.

I did really like how the surviving characters from the earlier section of the book were only gradually re-introduced in the aftermath and belatedly learn of each others' continued existence. It's interesting how the book so forthrightly reveals future events and strips away potential tension; early on, it reminded me a little of Kurt Vonnegut when Mandel would end a scene and say "Alice would die in two days, Bob in a week. Carly would last ten whole days." Perhaps because of that sense of candor, I was genuinely surprised to learn that, say, Elizabeth had survived.

Jeevan is a bit of an odd case. He's the first viewpoint character in the novel, the first one we know who hears about the Georgian Flu, and the only person taking specific actions to prepare for the onslaught ahead. It's strange how he just disappears for much of the book, and then pops up in Virginia, far removed from the other survivors we've been following in the Great Lakes region. He's such a major connector character, particularly illuminating every phase of Arthur's career, but also crossing paths with the major survivors. It seems a little odd to have him missing from the big reunion at Severn City Airport at the end, his only real contribution to the post-apocalyptic storyline being to receive some narration on how The Prophet operates.

But... I dunno, I ultimately like how things end up sort of messy and incomplete. There are some wonderful connections, like Clark seeing himself in the Station Eleven comics; but it's also kind of cool that he doesn't see the paperweight again, even after we've traced its very long journey through the decades. The world of the future is vast and largely unknowable, the maps filled in with lots of darkness and question marks, and those enduring mysteries make all the discoveries feel more significant.

I'm pretty sure that this is a stand-alone novel and we won't be returning to this world, but it is a pretty wonderful piece of worldbuilding. I was reminded of Zombie Spaceship Wasteland, and while this book speaks to the powerful hold these devastating scenarios can hold on our imagination, it's also a startlingly hopeful book, one that focuses on our resiliency and capacity for creation. I'm really glad to have it as an example of the other sorts of stories we can tell in these kinds of worlds.
Posted by Christopher Charles Horatio Xavier King III, Esq. at 8:24 PM