I talk about my "gaming queue", but the reality is that it's often more like a stack. I'll start playing a game, then be interrupted when a must-play new release comes out. I'll play that for a while, then suddenly get the urge to play a short and fun game. I'll wrap up the fun game, then finish that new release, and finally continue with the original game... at least until the next one comes along. It's even more common with books, but happens plenty with games. 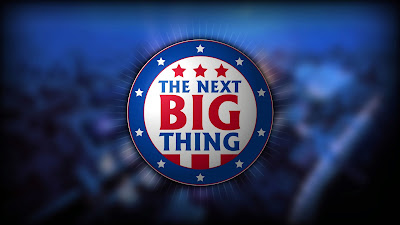 My current game might have had the longest interruption period relative to the duration of the game. My total play time of The Next BIG Thing clocked in at 10 hours, according to Steam; a not-inconsiderate chunk of that time was spent being flummoxed by unintuitive puzzles. I played about 7 of those hours in late June, took a break for a few months while playing 150 hours of Divinity Original Sin 2, then played the final 3 hours in a single night in September. 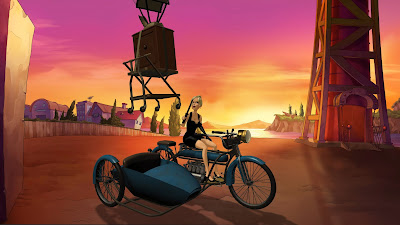 It was fun! It reminds me strongly of the classic LucasArts point-and-click adventure games. There are lots of puzzles, mostly organized around inventory items (acquiring, using, and occasionally combining). This is a very zany world with lots of silly characters, funny dialogue, extremely creative visuals. The overall experience is light and fun, though with a few frustrating puzzles. There's one particular music-based puzzle that's one of the least enjoyable things I've ever encountered in an adventure game, and I've put up with a LOT of BS puzzles over my decades in the genre. 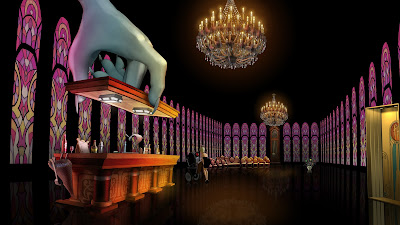 I haven't played anything from this studio before, but the game received solid reviews, and the few details I immediately gleaned sounded very promising: a politically-themed comedy with a spunky female protagonist and lots of puzzles to solve!

The setting ended up being a bit different than I had expected. Based mostly on the cover art, I had thought it was focused on politics, but that's actually a very minor aspect of the game: it's set in an imaginary version of Hollywood where monsters are real, and are very popular actors. There are journalistic and political threads that come out of this, but the core storylines are very much based around the Hollywood studio system. 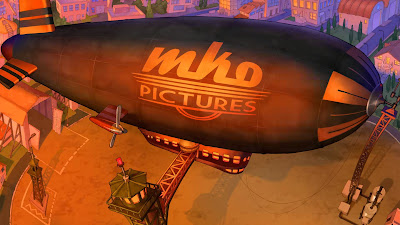 The developers are from Spain, and it does feel like you're seeing a European conception of America, which isn't necessarily wrong but has some odd emphases. It's a more-or-less-loving tribute to the Howard Hawks era, with a hefty dose of Citizen Kane sprinkled in. 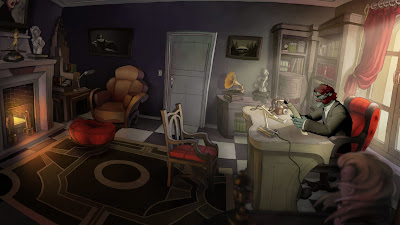 And, y'know, random stuff too. This felt very much like a game where people had a bunch of different ideas and decided to cram them all into a single story. So there's a lengthy sideplot where you're infiltrating a replica Egyptian pyramid for dubious reasons. But there's also a wonderful stretch where you're exploring your own mind and dreamscape, which I absolutely loved: I'll gladly gobble up any game where my character can plumb the depths of their subconscious.

There is one major thing that gives pause to my generally positive impression of the game. It's really weird and offputting that one of the two playable protagonists sexually harassed the other in the immediate backstory. This is purely played for laughs and never treated seriously. It's even grosser that the incident ends up being whitewashed as OK because the protagonists end up together. I know that things have moved quickly in recent years, but this was a dicey storyline in 2011, and is almost unimaginable in 2019. I think I get what they were going for - a bantering screwball romantic comedy - but ugh! 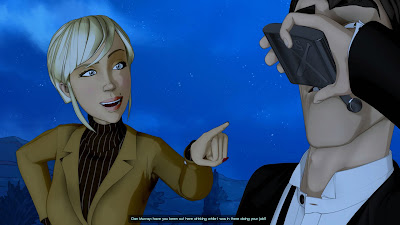 To be fair, though, something may have been lost (or gained!) in translation from the original script. Not to excuse the content or dismiss the effect it may have on people, but given the generally positive and fun tone of the rest of the game, I'd like to think this was an oversight of some sort. 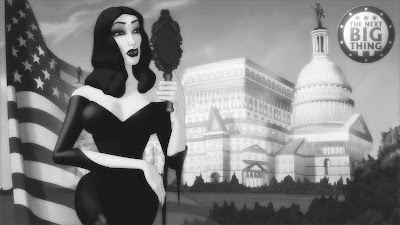 The main plot was pretty fun and twisty without ever getting overly complex. Partly because of that aforementioned history of harassment, I vastly preferred playing as Liz instead of Dan. I didn't expect William A. Fitzrandolph (a perfect parody of William Randolph Hearts) to become the villain, but it made sense and flowed well. I did feel like the game spread itself a bit too thinly across multiple characters; people like the Immaterial Man are introduced and don't really do much. But, again, all of these characters are unique and creative, and I think a big part of the motivation of the game was to stir all these wacky elements together, which also helps with the "whodunnit" feel of the first half of the game.

Playing this game reminded me that the adventure game genre never really died. Like a lot of people who grew up on the genre, I tend to think of the 90s as being the bright heyday of these games, then it dying and disappearing by the early 2000s, and only recently being revived on Kickstarter. But really it was only Sierra and LucasArts that went away, and both of them abandoned adventure gamers, not the other way around. Even before the retro indie wave started, the torch of classic point-and-click games has been carried by mid-sized European studios. I think those games are just as good as the classic ones; the big difference is that adventure games used to be the most expensive AAA games of their day, while today they command a fraction of the budgets of today's AAA games, but on their own they're just as long and involved and fun as the classic games. Which is exciting! My horizons are broader now than when I was a child, but it's a genre that remains close to my heart, and I need to remember that there are lots of people still making new games out there.
Posted by Christopher Charles Horatio Xavier King III, Esq. at 8:55 PM