FTL is one of those games that's been in the corners of my mind for ages, that I feel undeservedly familiar with despite never playing it. In my head it's become conflated with Kerbal Space Program and other games I haven't played, registered as Something Important but very hazy.

I received it on Steam as a gift from you-know-who, uh, [checks email archive] about a year and a half ago. It's been out for seven years now so I didn't feel particular urgency to start playing it immediately, and it finally came up in my queue. 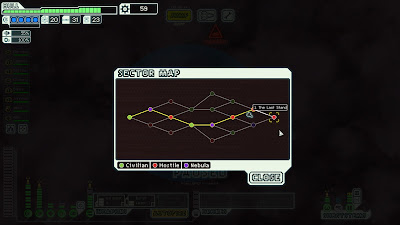 Now that I've started playing it, though, I've become rapidly addicted! It's one of those games that blooms out and colonizes my free time. Do I have an hour before supper time? Let's play some FTL! Then eat supper, then play more FTL! Wake up early the next morning, squeeze in an hour of FTL before work! It's gotten so bad now that I even picked up the (very well done) iPad version, so I can play more FTL even when I'm not at my PC. 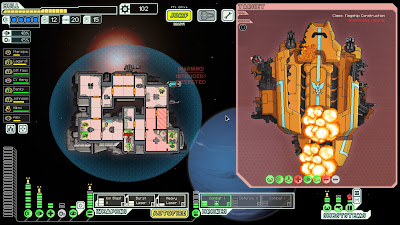 FTL is a roguelike, a genre I'm hot and cold on, but when I'm hot I'm very, very hot: occasionally something like Sil or The Binding of Isaac will really strike me and I'll dig deep into its systems, develop strategies, set challenges for myself, continually push myself to be better and faster. It's a delicate balance: most games rely to some extent on a Skinner box of stimulus and reward, which is necessary for the fun but becomes very offputting if the manipulation is too obvious. I need a solid hook to buy in to the treadmill. For Sil it was razor-sharp design (small numbers are important!) and a graceful honoring of a beautiful legacy. For TBoI it was the weirdly macabre setting and ridiculous variety of surprising items. For FTL it's the tactical/strategic balance and the morsels of story scattered through the game. It's a thin story, but manages to be very evocative and provides plenty of hooks for me to project stories onto. 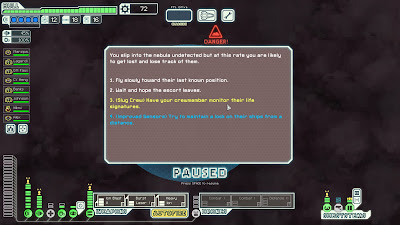 That story: You are a member of the Federation that governs this part of the galaxy. The hostile Rebels are threatening to overthrow it. Just before the game started, you acquired the Rebels' secret plans, and now they are pursuing you. You must travel through the galaxy to reach the Federation base, staying one step ahead of the inexorably encroaching Rebels, and warn them of the threat. 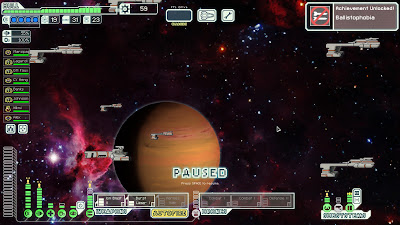 As with every roguelike, the map is randomly generated with each game. Each sector has a number of beacons, which are connected in a graph, and from one beacon you can jump to a number of other ones. What awaits you at each destination is a mystery. You might find an abandoned shuttle and need to decide whether to risk sending someone on board to salvage it. You might find a quarantined planet and choose whether to help them. Often you will find a hostile space ship, but you may be able to sneak past them or pay a bribe, or even hire them to delay the Rebels. The theme of the game is "risk vs. reward": bolder actions risk damaging your ship and harming your crew, but offer greater rewards than the safer paths. 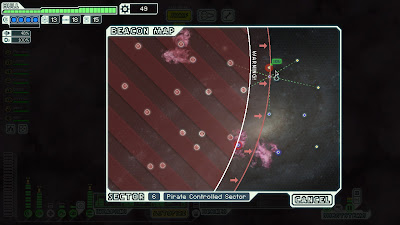 There's a good, manageable number of resources to acquire. Fuel is necessary to travel between beacons. Missiles let you unleash more powerful attacks against your enemies. Drone parts let you deploy a variety of useful robots to help you. And Scrap is an all-purpose currency that lets you purchase the other resources, as well as the wide variety of weapons, drones, systems, and upgrades that you will find for sale in stores and during special events. 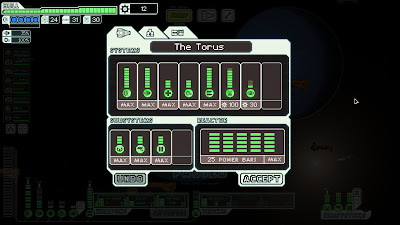 Besides your physical ship and equipment, you will also need to recruit and care for your crew. They can man systems to improve their performance, like firing weapons more quickly or more effectively dodging enemy fire. They can fight enemies and repair damaged systems and extinguish fires and patch holes in your hull. And, as I've just recently started to experiment with, once you have a teleporter you can transport them onto hostile ships, wreaking havoc during a fight.

You start with a small crew, typically 2-4 members depending on your starting ship, and can gain more in a variety of random ways: rescuing them from slavers, hiring them on, accepting deserters. There are a multiple alien races that each have their own abilities. Engi can repair systems quickly, but are weak in combat. Slugs have telepathic abilities and can detect enemies at a distance. Zoltan are made of energy and can provide power to the systems they man, but have fewer hit points. Mantis move quickly and fight well but are bad at repairs. Rockmen have lots of health and are immune to fire but move very slowly. And humans are all-rounders, with no drawbacks, and train skills slightly more quickly. The more a specific crew member works at a task, like running the engines or fighting, the better at it they will become. Over time I find myself getting attached to particular crew: even though they're just a small pixelated sprite, with maybe a skin tone and a hair style and a unique name, I become very invested in their well-being and concerned when they are at risk. 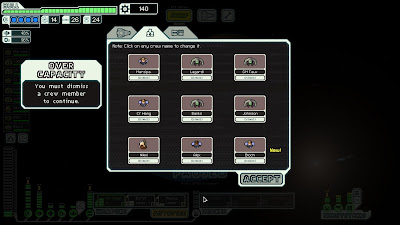 The gameplay of FTL is definitely the highlight, but I want to also praise its style. The music is extremely catchy and fun, and I find its various themes running through my head throughout the day; it's a retro chiptune-style sound, but higher-fidelity than you often find in the genre. The art is also retro, blocky sprite-based graphics, but not aggressively pixelated like other indie games of the era; I found it pleasant to look at even while running fullscreen on my large monitor, and the graphics on iPad look really crisp and clean. The user interface feels a little crammed at first, but I've come to love it: it's a function-over-form approach that gives you immediate hands-on access to everything you need, and secondary screens (like the Store or Ship interfaces) are uncluttered and easy to use. 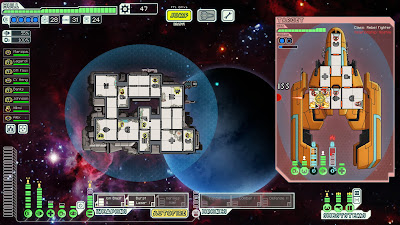 One very minor complaint: It would be nice if the in-game achievements were actually Steam achievements.

I had fun for my first several runs, all played on Easy mode without Advanced Edition enabled. I think I got to sector 3, then 5, then 8; that last one barely squeaked in and got stomped before even seeing the Flagship, but reaching the sector was enough to unlock some fun achievements. After that I buckled down and read some strategy, and my games have been going much more smoothly since then, with a couple of (Easy mode) victories. 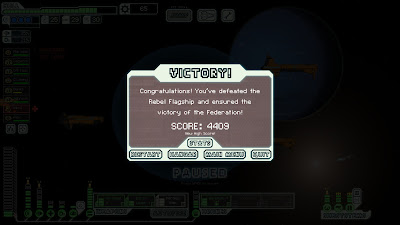 Some of the principles I've found most helpful for my success have been, in rough order of priority:
Other random strategy-esque thoughts that I've gleaned (mostly thanks to the many many years of online sources, supplemented by my own time in the game so far):

Not really mega spoilers; this isn't exactly a spoiler-heavy game, but whatever.

My first successful ship was the Engi Cruiser A. My crew was mostly Humans with a couple of Engi and a Mantis. It was a very Drone-heavy layout, with two Combat I drones and one Defense I drone. The drones were backed up with Burst Lasers and Ion Blast, adding an Artemis Missile for the Flagship fight. 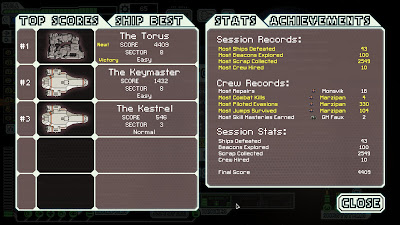 My second victory was on the iPad with a Kestrel A. I got the achievement for many different races on board so had a diverse crew in the victory. This was my first run with a Teleporter and Boarding, though I was running every system as well (Easy Mode = plenty of Scrap). I selectively boarded the Flagship to kill off the Missile technician, "kidnapped" the enemy boarders in Phase 3, then boarded them and killed off everyone except their Laser crew.

I abandoned a Slug ship playthrough on PC; I made it to Sector 5 and was doing pretty well, but made some dumb boarding choices and lost much of my crew. I'm currently progressing with an Engi game on my iPad, which isn't going as smooth as my PC run did but still has a decent shot at victory. I'm now contemplating a Stealth-based approach for future runs: so far I've always prioritized low-cooldown weapons (misses are less crippling, can hit multiple systems in quick sequence, effective way to pound through shields), but I'd like to try a run with long-cooldown weapons and a fully upgraded Cloak so I can avoid damage while charging and then hit the enemy with synchronized volleys. In my current run I sold off Burst Laser 3 and now wish I'd held onto it and given that strategy a try.

I'm having a blast with this game, and I think I still have a lot more to go. I'm currently planning to get a few more victories under my belt, then start trying the Advanced Edition mode, which adds new systems (hacking! mind control!) and races and things. I'll probably try to get at least one victory in Normal Mode, but I don't see myself ever attempting Hard. We will see, though! 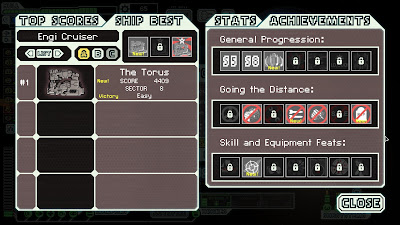 It has been really cool to see what an enthusiastic and dedicated community has sprung up around this game; any time I have a question, I can see spirited discussion and analysis from years ago debating the optimal strategies and outcomes. One small downside, though, is that my extensive wiki-trawling has caused me to inadvertently spoil a few secrets of the game. It must have been such a delight to be one of the early players of FTL, finding something out that nobody had seen before. By waiting so much longer, I'm now traveling a far more well-trodden path with few mysteries. But fortunately it's still an incredibly fun path to follow, and I plan to stay on it for a while longer.