There's been a very surprising and very welcome trove of fresh storytelling in Fallen London, the browser game I've been periodically inhabiting over the past decade. I've been at the content boundary for many years, and have a habit of just popping in every now and then: dancing my way through the Feast of the Exceptional Rose, or answering persistent doorbell rings at Sacksmas, or obliging the occasional friend asking for help dealing with their nightmares.

This return has been pretty different. Failbetter is in the midst of celebrating the ten-year anniversary of Fallen London proper. The game technically launched back in 2009, under the original name Echo Bazaar and a slightly more social-game orientation. The rebranding to Fallen London was one of the many (many!) gradual evolutions of the game. The celebrations have included what is by far the single biggest and longest expansions in the entire time I've been playing.

There's always new material being added to the game, but most of it is (quite sensibly) delivered for Exceptional Friends, paying customers who help keep the company afloat. The vast majority of FL content is free, but most of it has been in place since the early days. As with most games, only a small fraction of the total playerbase makes it to the endgame, and so most of Failbetter's updates have, understandably, been focused on improving the experiences for new players: diminishing the grindiness of the early game, adding more narrative thrust to the initial areas, providing new activities that all players can participate in.

Of course, there definitely have been end-game additions over the years. We got to visit the Elder Continent, to excavate the Forgotten Quarter in search of the Tomb of Silken Thread, and most recently to visit Arbor.  But this latest tranche is vastly different. The slack-jawed consensus among players is "It feels like becoming a Person of Some Importance all over again!" If you've played Fallen London before, you may already know that that means. If not... it's somewhat like discovering Skyhold for the first time in Inquisition, or opening the Galaxy Map in Mass Effect, or dying in Tides of Numenara. Something clicks, and you discover that there is an entire new world out there, with entirely new systems: the game is not only bigger than you thought, it's also deeper and more varied, with whole new modes of exploration.

When you first become a POSI, you gain access to a variety of interlocking areas and systems, new stats, new considerations. The Bazaar Side-Streets, the Zee, the Islands, the Empress's Court: you'll be visiting each of them, buying your ship on the side-streets, then a plated seal at zee, then breeding it in the Labyrinth of Tigers to get a Bifurcated Owl, easing the path to Notability to get a high-level Profession to get a stat-boosting weapon to increase your maximum Persuasive so you can reach 40 Renown so you can get the best-in-slot Shadowy Boots. The Bizarre, Dreaded and Respectable qualities that once seemed useless are now all-consuming.

Similarly, we now have several new areas. The Laboratory is where most of us will visit first. There's a complex and engaging system in here that feels very true to what I've heard from friends who work at research universities: you negotiate with the university administration, get equipment for your lab, petition for supplies, recruit grad students as researchers, engage on projects, gradually build up the reputation of both your lab (science!) and your teaching (humanity!).

On its own, this would have been a cool and satisfying addition: it's mechanically deep, and nicely challenging (it feels weirdly nice to have Watchful checks that I can't 100% pass even with my maxed gear), and can reward some unique items. But it also opens the portal to another major area, which we've been talking about for years and years: Parabola, the place behind the mirrors, which Is Not.

In some ways, Parabola is even more complex than the Lab. For starters, it includes multiple areas, which you will need to explore to find: you'll start off in your Base Camp (which you can level up - very helpful for keeping Nightmares in check!), but as you track various Parabolan creatures, you'll occasionally spot some other interesting areas. You can finally meet the Fingerkings, if you dare. Or see where the Great Game is played and play it yourself. Or float down the Waswood and look for interesting objects in the current.

In Parabola, you'll start seeing, using and increasing entire new stats: Mithrandcy, Glasswork, Monstrous Anatomy, and more. These stats even behave differently than the normal ones we're used to: You can train them up as before, and equip items to increase them, but you can also increase their maximum levels: usually the Glasswork stat caps out at 5 (along a pyramidal increase), but if you treat the Fingerkings right you can raise the maximum to 7, then train it up to that. Again, just being able to fail things again is kind of exciting: I've spent years just squeezing out another 1 or 2 points on a previously-maxed stat by chasing down a new best-in-slot item, and it's genuinely thrilling to once again get something going from the very start.

The University and Parabola are interrelated in wonderful ways. For example, you can create Glass Gazettes in the Lab, which will help you track Parabolan beasts. Capture a beast, and you can later study it in your Lab. This may grant you new insight that will help you further explore Parabola, and so on.

These two are also related to a third new area, the Bone Market. It's a shop near the Department of Menace Eradication, sort of a Bazaar that barters in kind: if you pick up an unusual bone in your research or your travels (sorted into the fresh and startling inventory category "Osteology"), you can take it down to the Bone Market and look for a willing buyer. This place also has unique mechanics, most notably that you will need lower BDR stats in order to attract certain buyers. This can be a problem for veteran players, who probably belong to a Respectable Club or have a Dreaded Tattoo or other permanent entanglement. Correspondingly, there is now an entirely new market in BDR-lowering items, which the Fingerkings would be all too happy to provide, at what will certainly not cause any danger for any person whatsoever.

The Bone Market is spare at the moment, at least compared to the huge amount of content at the Lab and the University. Failbetter has indicated that more options will be opening up in there soon, such as being able to open your own stall. That's right, the anniversary celebration isn't over yet: we still have more to come!

Not least of which is an entirely new festival! New festivals have been added every new and then, like the Fruits of the Zee and the Election. We're now mere days into a brand-new one, Whitsun, which is... about eggs? It feels pretty convoluted and confusing at the moment, but I'm pretty sure that most festivals probably do to brand-new players. 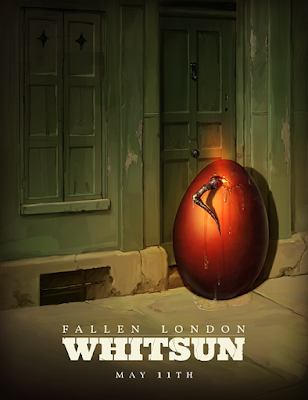 The core mechanic of this festival is basically: buy an egg, enhance an egg, hatch an egg. Depending on how you enhance it, you'll get different things. Mostly pets. So, it's a little reminiscent of the Feast of the Rose. Unlike the Feast, which was more card-based (to get Masquing), Whitsun is more time-based: once you get an egg ready, it takes 24 real-world hours to hatch it.

The whole thing honestly feels kind of overwhelming, but fortunately a kind soul created an extremely helpful and comprehensive Google Doc listing the possible rewards, which then lets me plan my own personal goals. There are a nice mix of desirable things here: some pets apparently unlock new branches on existing cards and stories, others boost the new end-game stats, and one is a new best-in-slot BDR boot.

(I do have to say that the new diversity in stats and stat requirements has made the already-inadequate Wardrobe system now woefully pointless. I previously wanted seven slots; now I think that up to fifteen may be needed, if the Bone Market is a regular thing. I guess we'll probably go back to manually searching through our Possessions every time we draw a new card. Just imagine searching through this mess, trying to find the one pet that gives a boost to Glasswork, or that lowers your Bizarre!) 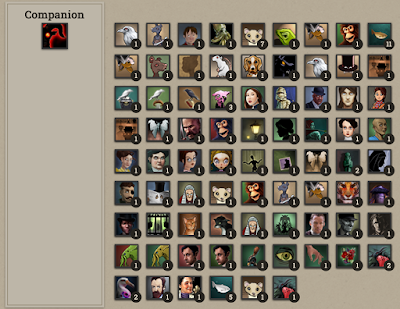 As with most festivals, you can get a lot of stuff for free, or pay some Fate for higher-level rewards. This festival uses a new currency, the ha'penny: everyone gets three of them for free, and you can buy more for Fate. Fate is required for the end-game-related pets, or if you want more than one of the clothing items. I'm thinking of dropping some cash in the next day or two for that. Fallen London has given me so much joy over the years, and is so decent in how they manage their business, that I always feel good when I toss them a few bucks.

While eggs are the stars of the Whitsun show, it seems like there's still more to come. The Apicius Club has reappeared and we're having our first De Gustibus in, uh, maybe five years or so. You can finally pick up that Sealed Copy of the Crimson Book you've been pining for! And it sounds like there are new, Egg-related research options at the Lab, and in Sinning Jenny's Finishing School, and perhaps a local newspaper edition to be written.

Oh, and I haven't even mentioned the Ambitions! They're all done, now! This was the very first stuff in Fallen London, the big, meaty narratives that drew us in and gave us purpose in the early days. All four have been completed. Well, by Failbetter, I mean. I'm personally in the midst of a very intense bracket tournament as I pursue my Heart's Desire, but my opponent will just need to wait until I've finished admiring all these eggs.

There's lots more to see and do, and with all the dispiriting stuff happening (or not happening) in the world now, I feel very grateful for the chance to escape into Fallen London for a little while now.
Posted by Christopher Charles Horatio Xavier King III, Esq. at 7:38 AM