California obviously has a lot of challenges right now, but I still love this state and am glad and proud to be a Californian. One of the many virtues of this state is its robust vote-by-mail system. Like many states west of the Rocky Mountains, VBM is normalized and heavily practiced here, which is always good for democracy in general (higher participation, easier access to information) and is particularly good in a pandemic year.

This is "the big election", the Presidential year when turnout numbers will be highest and interest the strongest; but this ballot is actually quite a bit shorter than in previous years. Statewide California offices are filled in midterm elections, and while we do have a lot of propositions there aren't as many as from other years. Still, there's a lot of important stuff in there. And, without further ado, here is how I will vote!

Joseph R. Biden and Kamala D. Harris. Biden was not my first choice in the primary, but the choice here is really clear. A man with clear empathy and compassion in the office will be a balm after the last four years. I've been a decades-long admirer of Harris, and it's been great seeing her grow in stature on the national stage. I think she'll be up for the job she has to do.

SAN MATEO BOARD OF EDUCATION

Maurice Goodman. It's a shame that Goodman and Mandelkern were forced into the same district, I would have happily supported either, but Goodman gets my nod.

No. One of my general rules of thumb is to vote "Yes" on taxes and "No" on bonds. Taxes take money from everyone, often particularly the wealthy, to fund services for everyone. Bonds use the tax code to transfer money from the working class to the investing class. If this research is truly a priority for the state, we should budget it through the General Fund. 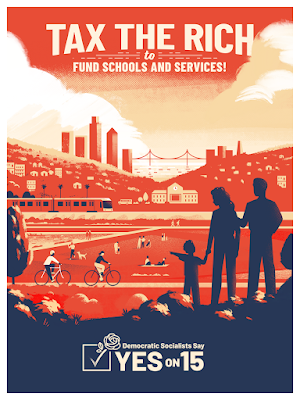 Yes. I would honestly prefer a clean repeal of Prop 13, and worry a little that this measure will make future reforms to the property tax harder. Still, it's a massive improvement on the status quo, and I'd rather succeed in passing Prop 15 than fail in repealing Prop 13.

Yes. My other general rule of thumb on ballot initiatives is, when in doubt, I tend to vote in favor of initiatives that were placed on the ballot by the legislature, and against initiatives that were placed by voter signatures. One thing that I really like about this year's official voter information guide is that it also lists how many people voted "Aye" and "Nay" in the Assembly and Senate; when there's an overwhelming majority in favor of something, it increases my confidence that it's a good idea. (Because of our reckless over-use of constitutional amendments in the past, tons of basic things can't be done by the legislature, so they often need to kick things back to the voters to approve.) Anyways: This proposition makes sense, will align the public sector more with how the private sector has been working, and should help make things better!

Yes. This seems to be two mostly unrelated changes smooshed together into one measure. Letting seniors move to another house and keep their old property tax bill should be a good change all around: it lets seniors afford to make sensible changes like downsizing, should create some more liquidity in the infamously sluggish California real estate market, and generally promote the kind of turnover we see in the rest of the country. (But again: Just repeal Prop 13!) The more important thing is the back half, though, which closes a gross loophole that lets the wealthy pass massive assets along tax-free for all future generations. Particularly after reading Piketty, I'm all on board for breaking up permanent wealth.

Yes. See my vote for Prop 10 two years ago. I'm more unambiguously in favor now, partly because it seems likely we will see more natural decreases in rent prices in CA over the coming years (due to environmental and other factors), and also because I'm more radicalized now on the social utility of limiting profits.

Strong no. Crap like this has made me start to think that, when private companies pay hundreds of millions of dollars to pass constitutional amendments to benefit their bottom line (see also: every insurance-related initiative you've ever voted on), they should have to match that amount dollar-for-dollar into funding our schools or another worthy endeavors. Let's make that an initiative! Uber and all of its ilk who built their entire business models on evading taxation should get bent.

Yes. Though, to be fair, this is kind of like Prop 22 but funded by unions instead of private companies. Still, it's for a better cause.

Yes. I have a bad feeling about this one, though. It's been in the works for a while, and the timing turned out terrible, asking voters to approve it when transit ridership is at a (pandemic-induced) decades-long low. But I've been pleasantly surprised in the past at locals stepping up to support public transit, and hope to be surprised again!

Oh, and I almost forget: Let's grade my performance from the primary!

Honestly, not much there to react to. I still think Warren would be a better nominee and President, but I also am getting increasingly excited by the prospect of her writing legislation in a trifecta federal government. Imagining her as the chairwoman of the Senate Banking Committee, crafting bank regulations, makes me giddy. She'd also be a fantastic Attorney General to revive the agency's moribund antitrust enforcement wing.

I don't pay as much attention as I should to my state representatives, but it was really cool to see that Kevin Mullen is responsible for two propositions on the ballot: 19, which should restore more sanity to our housing tax system, and 18, which extends the franchise to younger voters.

That's it for this election! I am so exhausted by politics of the last four years. A big part of me is looking forward to, hopefully, things being calmer going forward. But, of course, that isn't how politics works. We'll still need to deal with the root causes of all the problems we're facing. The endless fires are a result of global climate change. Massive inequalities are a result of our unfair tax system. The pandemic is definitely not helped by our terrible private health care system. The ongoing and consequence-free state murder of black citizens is a result of institutionalized racism. All these, and many more, problems will require big, ambitious, hard changes with lots of money and influence supporting the status quo. No matter who or what wins at every level, we'll need to keep on pressure and keep pushing to ensure that necessary changes happen. The good news is, the new crop of people should be vastly more receptive to such pressure than the previous set.