I can confidently say that Remembrance of Earth's Past is my favorite science fiction series that I've read in years. It's been both surprising and satisfying, insightful and thrilling, human and epic, audacious and inevitable. When I started reading The Three-Body Problem I wouldn't have imagined ending up where I did by the end of Death's End, and I feel impressed by the ride. 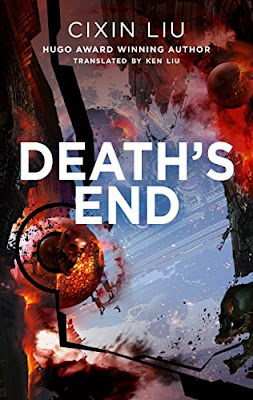 Throughout the series there's been a strong focus on basic research: not so much a specific invention created by a brilliant engineer, but rather, groups of scientists gradually delving into the fundamental mysteries of the universe. From the problems with particle accelerators in the first book through the strong nuclear force of the second book and various experiments with universal constants and the curvature of space in the third book, the most exciting question tends to be how the universe works rather than how we can exploit it. This research ultimately has practical applications, but the fundamental models are the most important part.

I love how the science gets more ambitious and stranger as the series goes along. It dovetails nicely with the telescoping time periods throughout the series: we advance through months, then years, then decades, then centuries, millennia, eons. Late in the series the characters describe things that seem bizarre and impossible; but, just think of how much commonly-accepted science today would have seemed bizarre and impossible in Benjamin Frankin's day. There's a humility in Liu's gaze, recognizing how inferior we are to the people we will become. I also really like how, even in this fantastic future, there are detours and dead ends: Earth civilization wastes time investigating theories that prove to be unfounded, and invest in ventures that prove fatally flawed. It feels so much like real life: Yes, science advances and gets better over the time, but not every step is a step forward, and while we're shaking our heads at the fools before us who believed the wrong thing, we should remember that they were fixing earlier problems from the fools before them, and one day our new ideas will seem just as flawed to those who understand more deeply than us.

In particular, I thought the presentation of lightspeed travel was especially interesting. Throughout The Dark Forest, I thought it interesting that, while this is a hard sci-fi series, it doesn't seem to grapple with the implications of relativity as much as other sci-fi books have, as we would expect travelers to experience less time than those who stay still. That does get addressed in Death's End, and in some ways the third book is about that problem, with some explanations that seem to contradict Einstein; but it's very earned, it doesn't feel hand-wavy, but rather a plausible idea for another sort of science. Just like we used to think that atoms were indivisible, we may learn one day that universal constants are not, in fact, constant.

Mostly some random thoughts in here:

I was a little surprised that the fall of Byzantium wasn't referenced again later in the book after that startling prologue. But we the reader can parse it: it seems like there was a fourth-dimensional collapse in our spacetime coinciding with the siege, leading to the exposure of previously hidden ways and contents. I wondered at the time whether there was anything special about that one woman in particular that allowed her access to such a state; but, given the later events on board Blue Space and Gravity, it was probably just that a portal opened in that one place inside a tower, and she happened to find it. That portal decayed like the fourth-dimensional space around Blue Space decayed. (It's interesting to think of how Earth's history might have been different if it had decayed slightly more slowly!)

I really enjoyed the characters in this book, and it felt like we had more access to Cheng Xin's thoughts and feelings than we have to previous protagonists. Her introduction seemed a little stiff, as she's mostly presented as an idealized feminine object of Yun Tianming's affection, but once she takes center stage she really earns it. Late in the book we're reminded that, thanks to her hibernation and light-speed travel, she's somehow still only in her thirties, which seems extraordinary considering all she has done and the outsized responsibilities she's held.

Similarly to how Shi Qiang bridged the first two books, Luo Ji bridges the last two. He does take a more active role in this book, which is cool; he's a fun and explicitly nuanced character, and it's interesting to see him play multiple roles over time. But it does make me freshly surprised at how Wang Miao completely vanished from the series after being a protagonist for the first book. It's not bad, and as I noted in my previous post I do like how the epic scope of the story is reinforced by all the fresh faces, but the disparity between Wang and Luo is curious.

Cixin Liu continues to innovate and surprise with the form of the novel, weaving in new elements. The first book stirred historical fiction and detective stories into hard sci-fi, while the second book used political thrillers. Death's End once again brings in a new genre from left field: this time, it's fairy tales! Roughly midway through the book, the main narrative pauses for a long and shockingly well-written fantastical story, presented as three separate fairy tales but really one continuous story about the Storyless Kingdom. The stories are so striking and so pertinent that they remained fresh and sparkling in my mind throughout the entire rest of the novel, much like how the Cultural Revolution loomed over the events of The Three Body Problem.

The fairy tales are well-written, but also very cleverly constructed, packed with allegories and clues and hints. I felt really impressed once they were revealed, much like how I feel impressed at, say, a long-laid David Mitchell revelation. The main thing that I'm left wondering at the end of the novel is the significance of the umbrella. Painting into two dimensions seems quite clear, an unheeded warning about the flattening threat. Given that, it seems like the spinning umbrella offers a solution of some sort. Spinning and rotating is significant throughout, like the watery vortex in the Norwegian sea. I wonder if, given enough time, Earth's scientists could have prepared some defense against this, or at least a way to buy more time. Perhaps curving space within the Solar System could have slowed the advancement enough to leave another way?

In other allegories, Prince Deep Water seems more clear. He was unaffected by the painter because he was already two-dimensional. That seems like another missed opportunity for escape: if Earth had somehow anticipated the strike, they could have followed the nihilistic strategy described by Guan Yifan and voluntarily reduced themselves to two dimensions. Which would have been an incredible loss, but would have guaranteed the continuation of Earth civilization.

Part of me was hoping that Bill Hines would make a reappearance in this book, as I also felt like there were some loose ends from his Escapist nam-shub as a Wallfacer. He doesn't, but I was extra-surprised to see Manuel Rey Diaz, out of everyone, providing a critical component to humanity's salvation. There's so much misdirection in this series, I love it!

The progression from Wallfacer to Swordholder was also really cool. It's probably just as well that Swordholding wasn't the main focus of the book, but I enjoyed this other sort of psychological contest. It's a game theory-y thing rather than an obfuscation thing; or rather, there's still some obfuscation since sophons can't see inside someone's mind, but it's reduced to a binary yes/no with catastrophic consequences, rather than an elaborate and hidden scheme. Anyways, the game theory part is really cool, explicitly harkening back to the Mutually Assured Destruction of the mid-20th-century, and realizing that mankind rationally chooses to place its fate on an irrational choice is hella exciting. Vindictiveness becomes a virtue, revenge a sacrament, one's capacity for evil the only plausible route to a good outcome.

There's a brutality running through the book. Over and over again, Wade is proved right and Cheng Xin wrong. A cold-hearted decision with limited casualties would have spared an entire civilization from extinction. It seems like the end of the book is on Cheng Xin's side, though. She "loses" every battle she's in: the high-stakes standoff of the Swordholders, gambling on the future with Halo City, and so on. But the ultimate long-term stakes are the heat death of the universe versus the big crunch, and only Cheng Xin's policy of love will lead to the right direction. Who knows, maybe those few kilotons of mass will be the deciding factor after all.

So, yeah! I do feel a little wistful at having finished this series and no more books to read in it. Which is kind of surprising; the second book ended on a thoroughly satisfying note, and I was wondering if the third entry would spoil that and follow a good note with a bad one. Not at all! It somehow manages to get even better and more ambitious, drawing me in to its telescoping story. It goes deep, it gets broad, but still stays personal, anchored to characters who we know and love dearly by the end. It's a really remarkable work.