The Butler Did It

It's a tough year for dystopias! One topic I've toyed with in recent years is what kind of fiction speaks to us or feeds us in different environments. In particular, when the world seems very hard and sad and scary, do we want stories that allow us to explore and dig in to those feelings? Or do we crave escapism and move towards lighter, irreverent works? 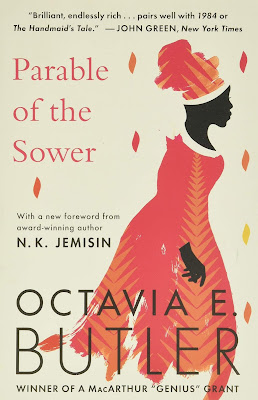 I think I personally tend more towards the latter, more so as I get older. So I might not have picked up Parable of the Sower on my own, but I'm very glad that my sister gave me a copy over the holidays. The book ended up hitting uncomfortably close to home: my sister read it during the BLM protests last summer, while my reading overlapped the insurrection on the Capitol. It's tempting to say that Octavia Butler was prescient when she wrote this book nearly 30 years ago, but really she was probably just paying closer attention than the rest of us.

This novel is set in the far-off distant future of 2024. Octavia presents an America that is almost unrecognizable: global temperatures are gradually increasing, sea levels are starting to threaten coastal communities, water is growing increasingly scarce, rainfall in California is unreliable, the federal government fails to meet the needs of its citizens, the police are far more interested in themselves than the communities they ostensibly serve, a demagogue wins the presidency by promising harsh treatment for the undeserving, corporations pay their workers a pittance while denying employment protections.

Somewhat like The Plot Against America, the big-picture story is very compelling, but most of the narrative is hyper-local. For the first 2/3 or so of the book we're restricted to a single cul-de-sac on the outskirts of Los Angeles, where a multiracial group of neighbors have banded together for mutual cooperation and defense against the outside world. The story is told by the narrator Lauren Olamina through a series of journal entries, describing the events she sees in her home, her neighborhood, and the little she can see of the world outside. Along the way she also spins out her home-grown philosophy-slash-religion of "Earthseed", finding a focus and destination for the horrors she sees approaching.

There's a lot that I love about this book, but one of the biggest things may be its depiction of how the dystopia arrives. In a lot of sci-fi, it's the result of a single catastrophic event: a misfired nuke or rogue virus or ecological calamity. In cyberpunk it tends to get hand-waved as something that just happened. Parable of the Sower is, I think, the best representation, as a steady progression of tiny incremental cracks that go unaddressed for too long until it's too late to meaningfully address them. It isn't JUST the environment, or JUST the politics, or JUST the culture, or JUST the crime, or JUST the drugs; any one of those might be solvable if the rest were in good shape. But they all reinforce each others' degradation. Crime gets worse because people are more desperate because it doesn't rain any more; people don't trust the cops because the cops don't serve justice; the government isn't accountable to the people so it can't focus on solving the climate problems.

Lauren is unique within the book for being able to recognize that things are going to get worse, and prepare herself and others in her community to prepare for it. She has an interesting background, as the daughter of a Baptist preacher who is one of the main cornerstones of the cul-de-sac; she is also in a mixed family, with a Hispanic step-mother and several step-brothers. You can see how a childhood of study and sermons has primed her outlook and disposition towards the world.

One of the most science-fiction-y aspects of the story is the thing I kept forgetting. Lauren's birth mother was addicted to a drug called Paracetco, which seems to be an Ecstasy-type substance that allows the (ab)user to physically sense what another person feels. Lauren has inherited the effects of this drug, which live in her system all the time: when another person is beaten, she feels the blows; when she sees someone bleed, she can start to sympathetically bleed as well. She calls this "sharing", though we learn later that others call it "feeling".

The story kicks into very high gear on a chaotic night: after several earlier sallies against the neighborhood, they are abruptly overrun by a vicious gang that murders and abuses virtually everyone. Lauren escapes on her own; the next day she comes back to the ruins, carefully collects some emergency supplies that her family had hidden, and finds a couple of other survivors.

The event is shocking, but the response is not: for years Lauren has had a plan to move north, to Canada if possible, Washington State otherwise. While the world up there has problems as well, at least they still have reliable water sources. This stretch of the book was probably my favorite: it's intense and more dangerous than the earlier portion, but also feels liberating and uplifting. Lauren isn't living in the shadow any more and dreaming, she's out in the world making those dreams real. Honestly, this section felt a lot like a video game - I mean that as a compliment! Lauren collects her party, manages an inventory, defeats enemies, collects loot, buys better equipment, moves on to a new zone, fights tougher enemies, and so on. The game-designer part of my brain can't help thinking of how smoothly this would all translate to a fun game structure.

Unlike a lot of games, Lauren exclusively acts in self-defense; but it's a very wary and proactive self-defense. She shows off her pistol and rifle to scare off attackers before fights can begin, and once a fight does break out, she aims to kill her attackers as quickly and painlessly as possible. It's a tough but fully rational posture: with her condition, she's debilitated and unable to protect her people when someone is in pain, so she needs to do what she's going to do before then.

Lauren is profoundly driven throughout the whole book, primarily by her vision of Earthseed. Most of her journal entries open with verses from Earthseed; when she is still at home she quietly keeps her thoughts to herself, but once she is out on the road she begins quietly and calmly proselytizing her companions, and by the end she has formed a community around her. It's interesting to see the birth of a new faith depicted like this. Lauren seems to view Earthseed as a religion, and nearly every verse invokes God. To many of her followers, it's more of a philosophy. One person compares it to Eastern wisdom traditions. It seems both modern and universal: it is explicitly oriented towards space travel, seeing mankind's destiny among the stars, but is focused around the individual's capacity to change themselves and to change the world around them.

I have to admit that I don't totally get Earthseed, despite its prominent focus and repeated explanations. But that's cool! We see a variety of responses to Earthseed among Lauren's group, and I like to think that different readers will have their own responses as well.

As I mentioned above, this has been a hard year for reading dystopias, and there were some days when I could hardly bear to pick up Parable of the Sower. I'm really glad that I stuck with it, though. While the world it depicts is grim, it ultimately shows the best aspects of humanity: resilient, adaptable, brave, intelligent, resourceful. This is the first novel of Butler's that I've read; apparently there's at least one sequel to this book, which I'm very curious to check out. While we're far closer to the 2024 depicted in this book than one would like, we do still have time to change the course that we're on, and this book offers both motivation to make those changes and encouragement that, at least on an individual level, we're capable of doing so.