The Underground Railroad is a good book, but can be a hard read. As it should be. It particularizes the horror of slavery, showing its toll on black bodies and minds, and the pernicious influence it wielded over all society. It's still very readable, with a compelling protagonist and tight action and a tinge of fantasy, but (perhaps ironically) it fights against escapism, holding historical reality firmly in the center. 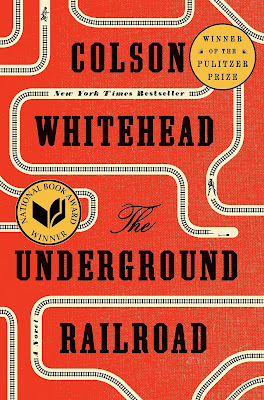 Of course this made me feel uncomfortable, and I could usually only manage a chapter or so per day before having to set it aside for a bit. It made me think about how I learned about the Underground Railroad and Harriet Tubman in elementary school. Slavery was presented as a pure evil, but in my memory we spent a lot of time focusing on the bright things that happened, which gives more hope and optimism about human nature. On further reflection, it's harder to get excited about dozens of people successfully escaping slavery while four million remained in chains. Likewise, this book doesn't let you get too comfortable with the rare positive exceptions: it gives you a taste of possibility, then snatches it away, bringing you back to the brutal reality that most people of African descent experienced here.

I didn't notice until I was nearly halfway through the book that it has won a Pulitzer Prize, which is really cool. It is a very well-written book, and what I like best about the style is the sort of verbal pacing that Colson Whitehead uses. He will often say what's going to happen in the upcoming scene, so there's a knot in your stomach as you watch people walking into the trap that awaits them. This technique reminds me a little of Vonnegut telling you the end at the beginning. But there are other times, most notably when the North Carolina Regulators raid the attic, where I gasped while reading because it happens so quickly: in less than a sentence you move from feeling safe to everything being lost.

The structure of the book is interesting too. Cora is the main storyline, and the book seems to move through a series of tableaus, each set in a different geographical region which exhibits a different flavor of white supremacy. Georgia has the brutal and unadorned plantation, with slaves forced to pick cotton under the threat of the whip. South Carolina seems like heaven in comparison, with blacks and whites living in the same society; but while whites here seem kinder they still disdain the race, preaching eugenics and other forms of control. North Carolina is a rigid terror, with whites abolishing slavery by abolishing black people, brutally murdering any dark face they see. Tennessee passes by in a blur, the color-blind forces of nature pummeling slave and free alike; but thanks to the Fugitive Slave Law only one of those categories can live freely. And finally Indiana shows how even in a putative free state white people will still feel threatened by black success: when the law does not directly enforce white supremacy, they will go outside the law and impose it with their own force.

I am curious about the actual history behind these tableaus. I hadn't previously heard of this North Carolina policy, and three minutes of research on Wikipedia didn't turn up anything; I wonder if it might have been a particular regional movement, or a dramatization of a particular strain of thought at the time. Given that this novel depicts a physical railroad secretly dug deep under the ground all the way from the North down to Georgia, it obviously isn't meant to be taken completely literally. The South Carolina experiences carry strong echoes of the Tuskegee experiments and eugenics, which did happen but were more 20th-century events.

In between each set of tableaus is an intermission, switching the perspective from Cora to some other character. Sometimes the intermission provides background on someone we're about to meet, other times it gives insight into a character who has left the story. These grow especially poignant near the end, when we get to see Caesar's love of Cora after we learn of his death. And it's especially moving to learn how Mabel "escaped" the plantation, and connect that with Cora's feelings of rage towards her mother.

Finally, an Escaped Slave newspaper notice appears before each section. Some of these are obviously about Cora, but I didn't recognize some of the other references. After learning more about how the underground railroad operates, I now wonder if some of these are examples of the coded messages used by conductors on the railroad to describe upcoming journeys for their passengers.

Of course, the railroad itself is a really compelling idea, a sort of fantasy loosely woven into this very grounded reality. I was expecting it to be a major part of the book, but it isn't really, more of a device to move the story forward at key beats. It's interesting how the railroad seems so grand at the start, with wide tunnels and gleaming stations and powerful trains, and so pitiful at the end, abandoned and overgrown and narrow and dark with just a hand-cart; it can't take Cora anywhere, she has to move herself.

Ultimately, I think the book points to how deeply entrenched racism and white supremacy are in America, and how fragile any gains are. It is much more pessimistic than the popular MLK sentiment that the moral arc of the universe bends towards justice. We as Americans tend to believe that things automatically get better over time, but they don't, and slavery is actually one of the best examples of that. At the time of the founding of the US there was entrenched slavery and white supremacy. By the eve of the Civil War, it was even worse. Most of the Founders wrote about their personal hatred of slavery and expressed a hope that it would naturally fade away over time. By the time of the Confederacy, southern leaders had no qualms about declaring the inferiority of the black race, the divine justification for slavery, the inhumanity of their "property".

And in just the last ten years, we've seen a massive backlash against the first black president which has led to courts striking down the Voting Rights Act. Even as you read this blog post a raft of bills throughout the nation are advancing that will make it harder for black citizens to vote, further entrenching white supremacy. What's happening in Georgia now feels an awful lot like what happened on Valentine's farm.

And in conclusion, that's why we should abolish the filibuster.