In This House We Respect The Laws Of Thermodynamics

Real talk: my last post on Hades was in my drafts folder for three weeks between finishing and publishing. I just needed to upload the screenshots for it, but any time I started to do that I thought, "I could be playing Hades right now!" and would do that instead. 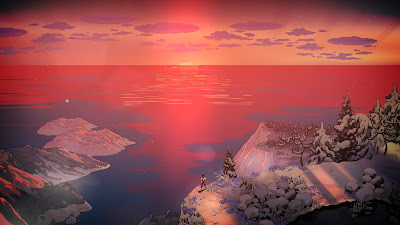 So, yeah, Hades has been a surprisingly addictive and fun game. I've come a long way from my initial annoyance with it. In particular, now that I've played it for so long I don't feel as negative about my hand-eye coordination or reflexes. A lot of my frustration was really due to lack of familiarity with the enemies' move patterns and the map layouts. Now that I've played for a while and have absorbed all that, I find I'm having a blast and doing vastly better, cruising easily through former roadblocks and even welcoming in-game handicaps to increase the challenge. 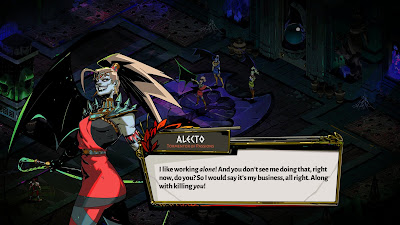 There are lots of different ways that roguelikes handle randomness. Early on I thought that Hades was generating each new room; in particular, in Tartarus, some rooms have closed gates or boulders blocking doorways, so I assumed that those things would change from each run. Eventually I realized that there are a finite number of possible rooms. Certain things within those rooms can change: the enemy types you fight, and some extras like Wells of Charon or Treasure Troves. But things like the position of traps and walls and pits are always the same, and getting to know those will make the progression much easier. Likewise, you come to recognize enemies' attack animations, patterns of movement, and so on, and get to a point where you can reliably anticipate their next move and block or counter it effectively. All this takes time, and a lot of dying, but that's the whole point of the game! More so than any other roguelike I've played, Hades has a fantastic in-game explanation for why you're fighting and dying over and over and over again. 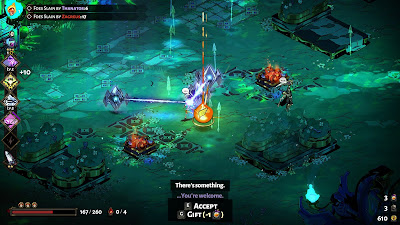 Here are some random strategy tips that I've found helpful. First, on runs themselves: 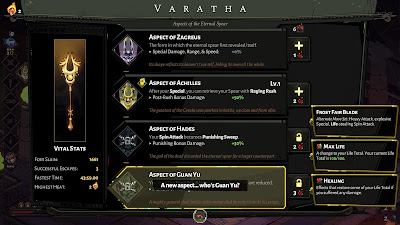 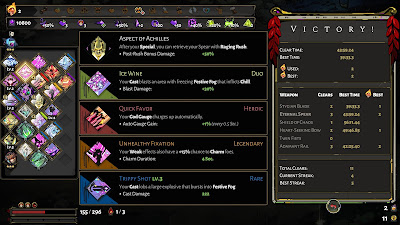 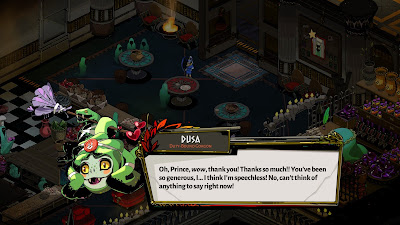 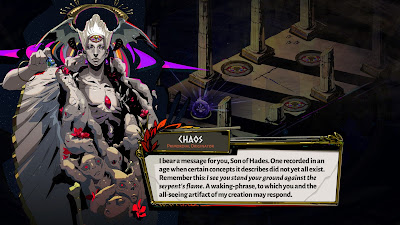 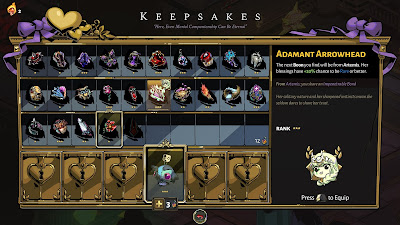 And some thoughts on the between-run resource management stuff: 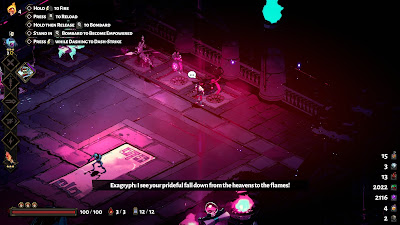 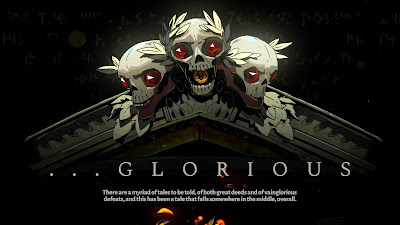 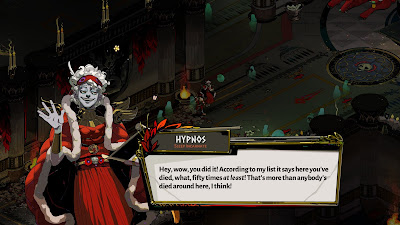 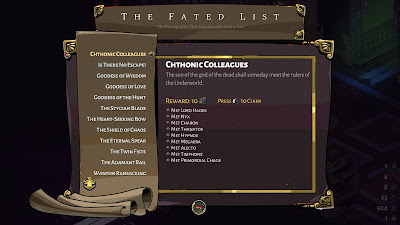 In my previous post, I mentioned how I was surprised that Supergiant would abandon their pattern of creating original worlds to instead set a game in one of the oldest existing worlds. I've come to deeply love that decision. While the setting is more familiar than it would have been otherwise, the story that they have to tell feels radically different from other video games. I've complained before about how so many games are telling the same story that "A Great Evil Will Destroy The World And Only You Can Stop It". At first I assumed that Hades would end up being something like that: you're escaping from Hell, after all! Maybe we would prevent the legions of the dead from overrunning the living, or whatever.

Instead, the game ends up being about something totally different: reuniting a dysfunctional family. I love how the story gradually unfolds and you are eased into the objective. The mechanics of what you're doing never change: you're still fighting your way out towards the surface, over and over again. But the meaning of what you're doing evolves and matures. At first it's an act of defiance and spite, rebelling against your oppressive father to seek freedom. Then it becomes a voyage of discovery, seeking to find your "lost" mother Persephone. It turns into an act of pilgrimage and growth, as you desperately seek to forge the bonds that were lacking in childhood (quite a change from the "breaking bonds" imagery of your earlier runs!). Then it becomes a cunning ploy, with you seeing yourself as a member of the underground family and protecting your (problematic but valuable and ultimately loving) parents from the vengeance of your relatives on Mount Olympus. And finally it becomes a job and a ritual, a responsibility you embrace, a fun activity that involves you killing your dad over and over again (though occasionally he does kill you, too). 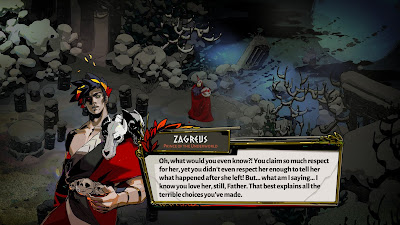 That particular dynamic is so fascinating. Early on, Zagreus feels such bitterness and anger towards Hades, while his father feels cold and disdainful towards him. And then... you work it out. It's a long, gradual process (that, again, involves killing each other over and over again), but over time you come to understand where each other is coming from. Zagreus comes to realize how much of his dad's actions are motivated by a desire to protect the ones he loves, crippled in expression by a too-strong sense of pride and need to maintain an image that he feels befits his station. For his part, Hades comes to terms with his son as his own man and not a reflection of Hades' failings with Persephone, and recognizes that while Zagreus does not share all of Hades' values, Zagreus is motivated by good intentions and has many skills (that do not involve clerical work in the Administrative Chamber). 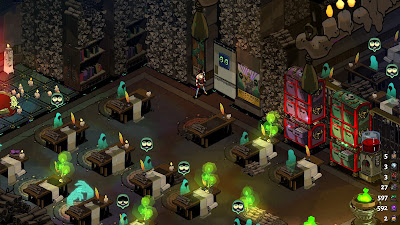 Cathartic is the best word to describe it. Zagreus and Hades work out their feelings and build a relationship by fighting each other, letting out their emotions and coming to respect one another. Sigmund Freud would have a field day with this game! I thought a lot about Freud's idea of an Oedipal complex, which doesn't directly apply to this game, but I think Greek mythology is an incredibly rich source for exploring complex psychological phenomena. 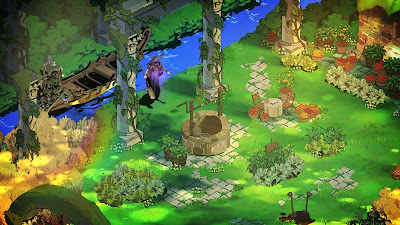 The structure of the game is super-interesting too. When you start the game you think you have a clear objective, to escape the Underworld. It takes a lot of practice and growth, but you eventually do it, hooray! And then you have a new objective, centering around Persephone, and keep playing the core game loop, now with more skill and a broader view of your goal. You reach a point that seems like a clear end of the game: the credits roll, you listen to a typically wonderful Supergiant vocal track, Persephone is back in the underworld and things seem great. But, I kept playing, and I think have spent more hours since seeing the "end credits" than I did before. You totally could stop playing then and would have a satisfying story; but the world and the characters are just so deep and rich that I didn't want to leave them behind. I've now logged just north of 100 hours in the game, and there is still new dialogue and subplots that I'm enjoying resolving. 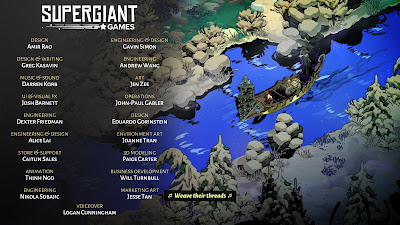 My most recent thing has been viewing the Epilogue, the final denouement between Olympus and the House of Hades, and I think I am ready to call it a game. But I am still curious: would I ever see Persephone up in Greece again? What is underneath those other two statue cloths? What will Aphrodite and Demeter say when I forge bonds with them? And so on.

And that's just the story! There is a huge community around Hades, mostly oriented around speedrunning, and tons of people have a blast running through the regions and experimenting with crazy builds and stuff. I can definitely see the appeal: story aside, this is a roguelike, which is designed for endless replayability and excitement.

As for me, I think I'm done, but I'm delighted I saw the whole journey through! 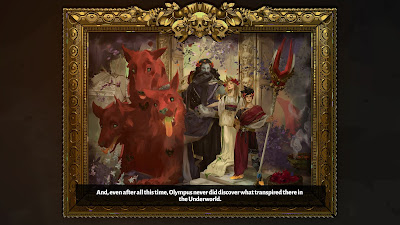 And now, some lists. 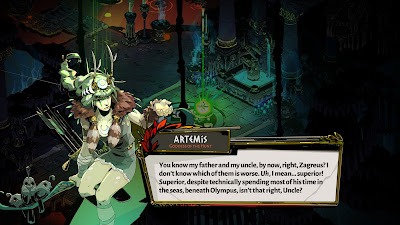 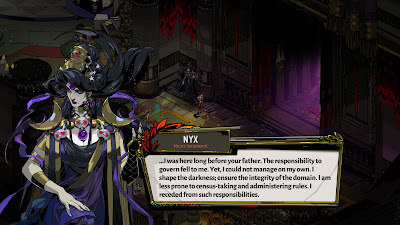 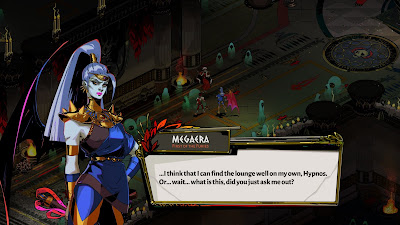 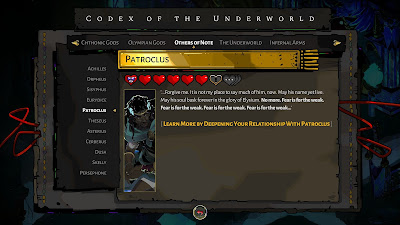 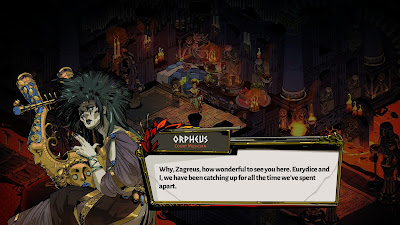 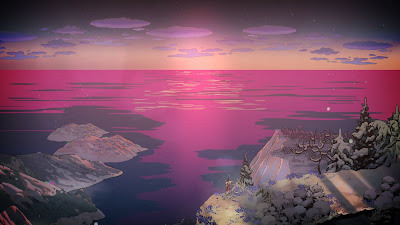 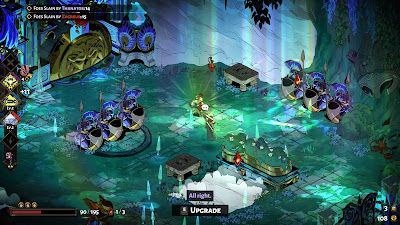 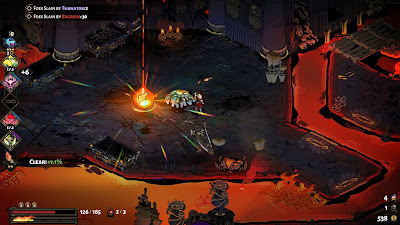 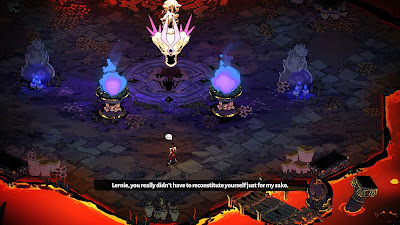 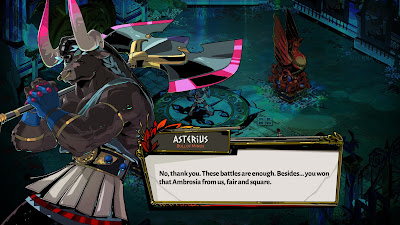 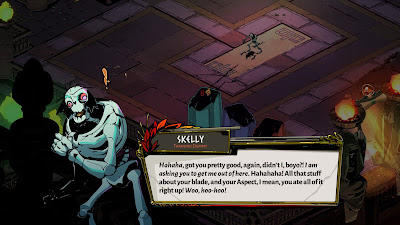 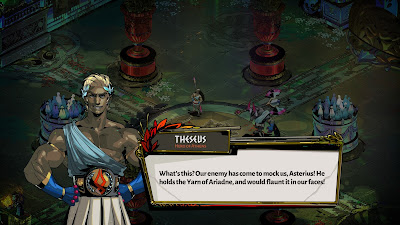 I want to say "Supergiant has done it again!", but really, they've done more. Hades is another fun, engaging game that I've had a blast playing and looking at and listening to. But it has also nailed something better than their previous games. All of Supergiant's previous offerings were designed to be replayable, and to some degree built around it, but as much as I loved those games I never felt sufficiently compelled to have a second or third go-around. With Hades, though, I've tackled the core roguelike game over seventy times, and have over forty victories. It feels like they've really cracked the code on how to tell a story that doesn't have to end, and keep you coming back: to have more fun, to hang out with people you love, to strive a little harder and dig a little deeper.