I really should read more books and play fewer games. Books are so quick! I've been poking away at Hades for months, and tore through The Fifth Season in less than a week. 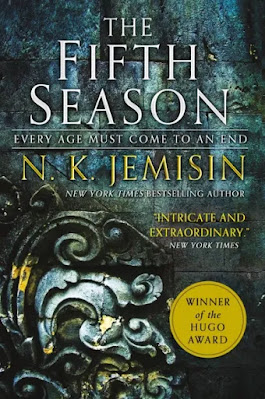 Once I got started, that is. I think I've had this book on my end-table for almost a year now. It was worth the wait! I was kind of expecting a dense and impenetrable new fantasy world, but it was a breeze, and once I got started I could hardly put it down. The writing is tight and visceral, the world-building intriguing without being overwhelming, and its clever construction and sense of mystery elevate its appeal.

One mild bookkeeping note: I didn't realize this until I finished, but there is a glossary and a very brief history in the very back of the book. Neither are at all required to read and enjoy the book: much of the fun of speculative fiction is figuring these things out without being directly told. But if you're feeling lost it could be a helpful lifeline.

The world of the Fifth Season is the Broken Earth, and the continent ironically named the Stillness. As we learn early on, the major difference between this world and ours is a much higher level of seismic activity: not just earthquakes, but also volcanoes and vents and ruptures all over. Life in the Stillness is precarious: people may live safely for centuries, then watch as the sun is blotted out for a hundred years or an entire seaboard is wiped away in a giant tsunami.

I'm going to do an annoying thing in this post and write about what other books this one reminded me of. First up is The Three Body Problem, and specifically Trisolaris. As with the Trisolarans, the residents of the Broken Earth have had to adapt to recurring catastrophic events, and throughout the novel we see all the deep-rooted cultural, social and political effects this has had. Everything is oriented around surviving a Season. People have three names: a given name, a use-name, and a comm-name. The use-name is essentially a caste designation, describing the role the person will play in a Season: a Strongback will perform manual labor, a Leadership will organize the others, a Resistant will handle dead bodies and other disease-inducing tasks, and so on. The comm name designates what community the individual belongs to: without a well-organized community working together, nobody can hope to survive the long trauma of a Season.

Interestingly, due to the long gaps between Seasons, these actions are not described in law: instead, they are passed down in folklore and nursery stories and similar oral traditions, collectively dubbed Stonelore. That's another cool idea I've encountered in some other science fiction, most recently A Canticle for Leibowitz. When knowledge needs to be passed down over millennia, it will outlive any one empire or institution, and so it needs to be passed down as part of culture to be remembered.

Most of this book is focused on Orogenes, individuals who have sort of psychokinetic powers. Their presence makes the novel feel fantasy-ish, although it doesn't have magic per se, and the power of orogeny is clearly described and circumscribed. I tend to think of them as behaving somewhat like Maxwell's demon: orogenes do not create or destroy, but instead redirect, channeling waves and vibrations in other directions, transferring heat, and otherwise redirecting the total energy within a system while keeping the total system stable. They channel these powers through their sessapinae, an organ that allows them to project their thoughts into kinetic or thermal motion. The sessapinae reminded me of the pineal gland, which earlier philosophers on Earth thought of as the bridge between the mind and the body that united dualism.

Orogenes are incredibly important for the cultures of the Stillness, as they are able to detect (or "sess") developing earthquakes or worrying fault lines far under ground, and counteract seismic activity. However, they are almost universally feared by most citizens, who associate them with the destructive movements of the earth. And, in fact, a rogue orogene can cause enormous damage by using their power for destruction.

The orogenes are carefully watched over by Guardians, a parallel order specially selected and trained for their ability to control and thwart orogenes. This dynamic made me think a lot of the Mages and Templars in Dragon Age: One order is incredibly powerful and dangerous, and must be closely managed by a second order that both protects them and stands ready to destroy them if necessary.

I spent much of the book trying to discern the timelines for the three storylines and figure out how they were sequenced together. At first I assumed that they were all happening simultaneously, but as time went on and the onrushing Season remained in one storyline, I decided that must be the last one.

I realized around halfway through the book that all three main characters are actually the same person, specifically when Syenite briefly remembers the comfort of a warm blanket. That strongly suggested that Syenite and Damara were one and the same, and from there it was an easy assumption that Essun is also the same person. Once that slotted into place, the timeline and everything else became much clearer.

Another thing I'd been curious about throughout the book is whether the Broken Earth is our world or not; much like the Steerswoman Saga I could see it going either way. For most of the book I'd been assuming that it was, mostly because of the language. Something like "comm" as a shortened form of "community" makes a lot of sense if the Sanze and others are descended from English speakers; if they aren't, then I would think they would use an alien term, or just be translated as "community", but having a derivative of our phrase makes me think they are descended. In the last couple of chapters this seems to be confirmed in the tale of Father Earth. This strongly suggests that humanity (us) brought on ecological catastrophe, eventually overstressing the planet and turning it from a source of life into a source of death.

There are two more books in the series, and I am very curious to learn how the moon plays into all of this. My current baseless theory is that the stone-eaters are Mooninites: they came to Earth whenever the moon did, hence the presence of aliens on Earth. It isn't clear to me what their agenda is, or rather what their agendas are, as there are clearly factions within the group, but I wonder if they and the obelisks are trying to restore their homeland of the moon.

I'm really digging this series so far. I typically try and space out reading books in a series to make it last longer, but right now I'm feeling pretty strongly inclined to dive right back in with book two.