I stand corrected: Unlike my assertion in my last post, sometimes games are shorter than books! And when that happens, it's generally a good thing!
Tacoma is the latest entry in the long line of Awesome Games That My Younger Brother Gifted To Me That I Took Way Too Long To Get Around To Playing. In this case, though, once I started it, I was able to finish in just a few delightful hours. 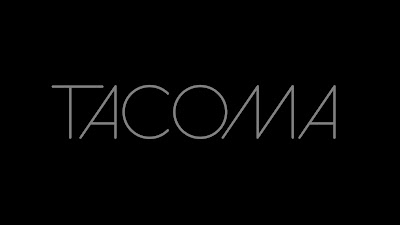 Tacoma is the latest entry from Fullbright, who made my beloved Gone Home. It isn't a sequel, but plays and feels very similarly to their earlier entry. A so-called "walking simulator", it's more about exploration and discovering the narrative through the environment than through traditional gameplay.
MINI SPOILERS
The most obvious difference is the change in environment, in time and space. Gone Home was a deeply nostalgic and personal story, set in our near history and filled with objects we've personally touched in our own lives. Tacoma is set in the speculative future of 2080, with some science fiction underpinnings. I actually found myself thinking of Prey a lot while playing it: of course, the games are totally different in tone and style, but the sense of being in space and watching people make lives in the void felt similar. You can sort of piece together the story of how we got from the present to the future, and it seems like Elon Musk gets a lot of the praise. I guess that when Fullbright was working on this game back in 2016 or so Musk would have been primarily seen as the SpaceX guy, but some of those references have not aged very well. 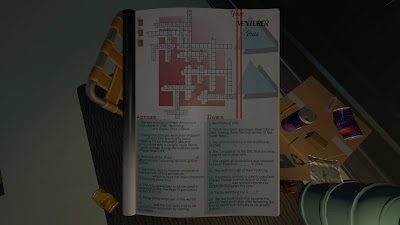 Like in Gone Home, Tacoma's game controls are very simple. You can move around; but since this game is set in a space station, you can sometimes move around in three dimensions thanks to zero-G. You can pick up a single object in your hands. You can inspect it closely, moving it around in all axes. Every once in a while you'll find something useful this way, but the vast majority of the time it's just an object. And that's a big part of the pleasure of this game! The environments are real and lived-in and tell stories. I mean, if you came over to my place, most of the stuff you saw wouldn't be like a clue to the password to my computer, but it would strongly suggest how I live and what type of person I am. 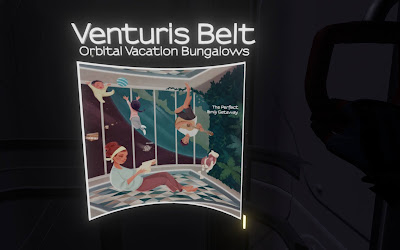 Back to the gameplay: Tacoma does add one new mechanic, which is an augmented reality overlay. As you investigate the station, your computer automatically collects historical logs from the surroundings: audio feeds, video recordings, and so on. Then you can project what are essentially ghosts from the past into the physical space of the present. This works a bit like an old-fashioned VCR: you can play it forward, pause, rewind. 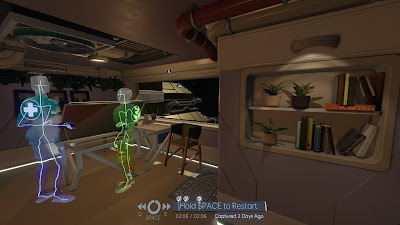 What's really cool about this is that, in addition to the written artifacts we had in Gone Home, Tacoma also demonstrates social dynamics. You'll play a recording of two people talking, and observe a third one coming to join them. Where did he come from? You can then rewind, following that third person back along his route, and see where he was talking with a fourth person, or running something past the station AI, or performing some task. Some of these interactions are moving: A medical officer calmly walks a panicking botanist through a difficult choice, listens to his concerns, excuses herself, walks away... and, once she's out of earshot, bursts into tears. Both of them, oblivious to the other, call up the ODIN AI and ask its advice on the interaction. 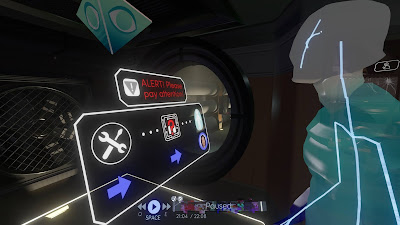 There is a mild gameplay element to this. At certain times in the scenes, the characters will bring up their own AR desktop, at which point you can then access it and collect more information. Again, this is typically insight into their lives and personality, but occasionally a passcode or other resource needed to progress.
MEGA SPOILERS
The overall emotional arc of Tacoma closely resembles that of Gone Home. In both games you're exploring an eerie, deserted environment, surrounded by the evidence of people but with no living people to be found. As a player of video games, you naturally assume that something terrible has happened: what else could "No life signs detected aboard" mean? As you collect evidence, you start to speculate about the plot: did the peculiar uncle come back as a ghost? Did the ODIN AI follow the path of HAL and SHODAN and GLADOS and kill everyone? There are a lot of cues in the game that we automatically latch onto because they're such ubiquitous tropes. There are six people on the station? It must be a whodunit! 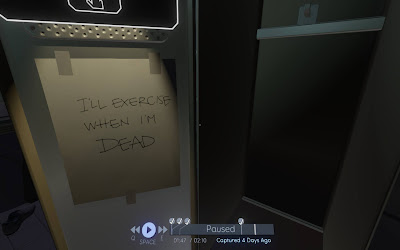 But, in both games, the actual answer ends up being surprisingly peaceful and... nurturing, maybe? Nobody's dead. Everything's fine. That wasn't blood in the bathtub. There was nothing wrong with the cake. This non-shocking ending actually feels shocking because that's not how we're used to games working. 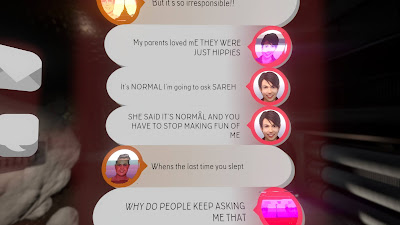 As I was playing this, I sometime found myself wishing I had played this before Gone Home, or memory-wiped that game from my mind: not because of the similarities in gameplay, but more because I was at least somewhat anticipating a peaceful ending, which I wouldn't have if I'd gone in cold. So I was pleased that I did get a surprise, at the very end, with the revelation of who the main character is working for. That's a cool shift from Gone Home: in that game, you learned a little about "yourself" as the older sister, but the focus was very much on the rest of the family. In Tacoma, you (as the character) end up taking a much more active role in the narrative, even though you (as the player) don't recognize that role until the end. 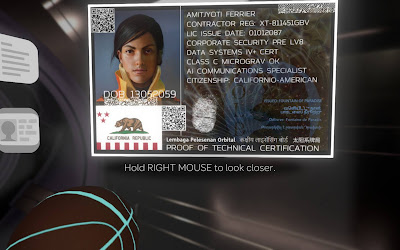 I guess that the other major change from Gone Home is that there actually is a villain in Tacoma. It isn't the AI or the crew or aliens: it is their own employer, Venturis Corporation, and more specifically its CEO, Sergio Venturi. I did like how the game addresses political and economic issues, and I especially loved how it takes a point of view instead of the both-sidesism that plagues AAA titles. 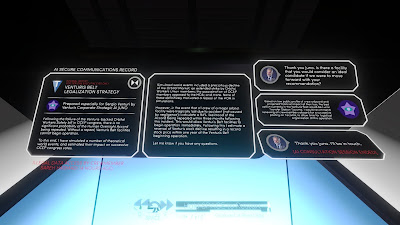 END SPOILERS
Tacoma was a terrific little game, and also a nice, albeit temporary, milestone: it was the last unplayed game left in my Steam queue! This happens once every five years or so and is always very welcome. There's a lot on my radar that I'm looking forward to digging into eventually, like Red Dead Redemption 2 and (one day, eventually) Cyberpunk. In the meantime, though, I'm going to check out the Federations DLC for Stellaris and get back to those books I've been raving about!
Posted by Christopher Charles Horatio Xavier King III, Esq. at 7:31 PM